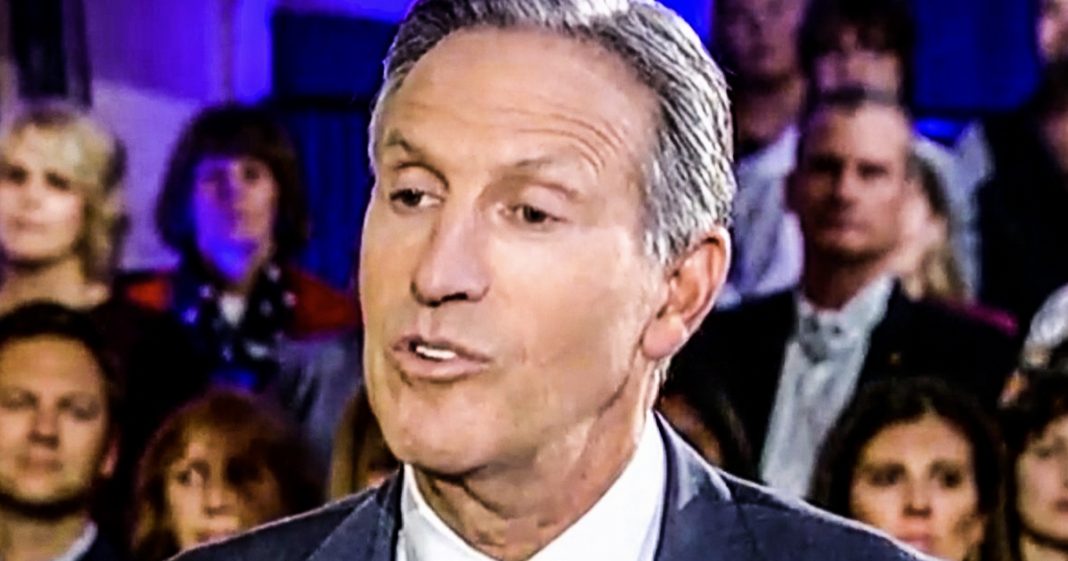 Presidential-aspirer Howard Schultz is somehow still making headlines with his horrendous ideas and his lack of a decision on whether he’s actually going to run for President or not, but he hasn’t come up with any actual plans that would be good for this country. He’s degraded several ideas that the public actually likes and he seems to have a gross misunderstanding of why things are so dismal in Washington, D.C. Ring of Fire’s Farron Cousins explains why we’re past the time for the media to stop giving this man any more attention.

Howard Schultz, the Starbucks CEO, who still hasn’t yet completely decided whether or not he’s running for president. Uh, recently did another town hall where he offered the American public absolutely nothing because Howard Schultz has nothing to offer the American public. What he did offer, according to Matthew Yglesias over it to vox.com a lot of platitudes, but he did kind of hit on a point that is accurate and that is that it’s hard to do anything in DC because the Democrats and the Republicans just hate each other more today than really they ever have probably since the civil war. And he has a point that actually is a lot of the reason why Democrats and Republicans can’t come together usually and pass legislation. There is a lot of animosity. There was a lot of hatred. Well, there’s also a lot of people like Howard Schultz who kind of sparked that hatred years ago.

And what I mean is that, yeah, Howard Schultz is right about why things can’t get done. He’s just wrong about the reason. See, Democrats and Republicans don’t necessarily just hate each other for the fun of hating each other. They hate each other because they’re basically being paid by their wealthy donors to hate each other. You know, the billionaire Class, aka people like Howard Schultz, see Howard, which you have to understand here is that you’re not going to be the one to come along and fix these problems. In fact, you and the people like you, you’re the ones who helped create these problems. Do you know why we’re not getting any kind of meaningful action on climate change and haven’t been for 20 years? It’s because of fossil fuel money and the billionaires who run those companies just feeding money into the Republican Party and occasionally over to some of the Democrats.

Do you know why there we’re, we’re still having this fight over prescription drug prices instead of actually doing something about it. It’s because of the massive amount of money that the billionaires and the Big Pharma cartel are pumping into politics. Billionaires are the problem. Howard billionaires are not and never have been and never will be the solution. So I get what you’re trying to say here, all the platitudes of why, but it just needs to get along. Maybe, maybe if we weren’t arguing so much, we could do things. You’re absolutely right and I guarantee you we wouldn’t be arguing as much as we are if we got corporate money out of politics. You see, you brought up the problem and your little town hall and Iglesias explains this in the article, but you neglected to offer any solutions whatsoever. And Yeah, anybody can just talk about problems all day long, but coming up with solutions is a hell of a lot more difficult. And if gonna run for president, then you damn sure better have those solutions in your back pocket ready to pull him out the next time somebody asks, don’t just sit there handing us platitudes saying, let’s be nice. Let’s get Democrats and Republicans to work together. How about telling us, let’s get everybody to work together by removing all of that corporate money. That for far too long has skewed the vision in Washington DC.