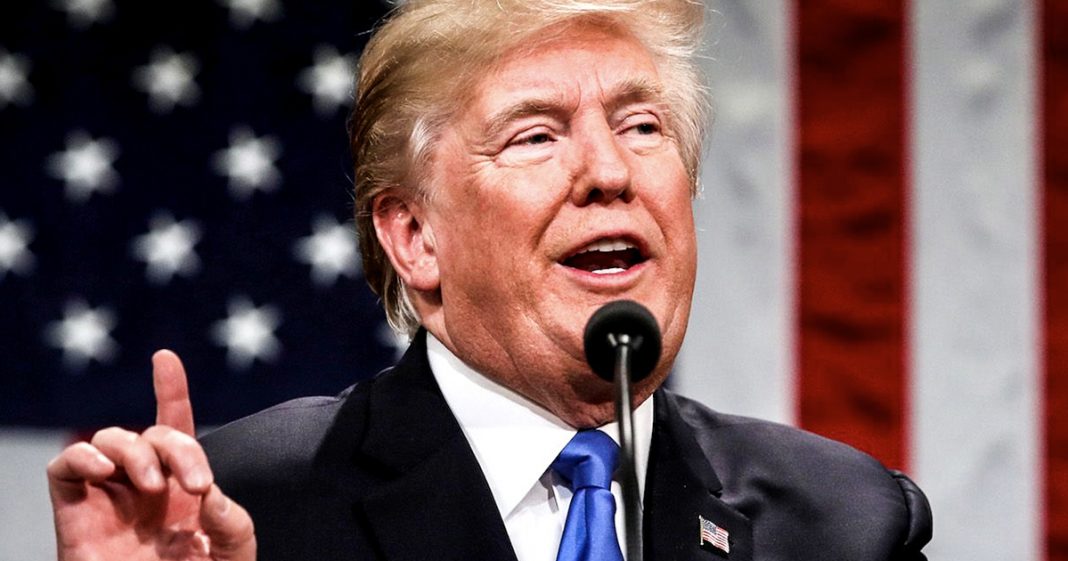 Donald Trump has been violating the Emoluments Clause of the US Constitution since the day he took office. But rather than having the President stop taking money from foreign leaders, the US Department of Justice decided to just change the rules so that Trump CAN accept these gifts of cash as long as they run through his businesses. That doesn’t fix the problem at all, and actually makes things worse by letting foreign officials know exactly how to put cash in the President’s pocket. Ring of Fire’s Farron Cousins explains what’s happening.

In case everyone has forgotten about it. Let’s remember the fact that Donald Trump and his administration are technically being sued right now in court over the fact that Trump keeps violating the emoluments clause of the US Constitution that says, as president of the United States, he cannot accept any form of foreign emoluments, cash payment, bribes, gifts, whatever it is. He can’t take them from anyone outside of the u s any foreign leader cannot do it, do not give me any money, gifts, whatever it is, I can’t accept it. That’s actually in the constitution and it’s to help prevent foreign countries from having influence over our government and affecting our policy. But in those lawsuits that Trump is currently fighting in federal court, his own department of Justice has tried to change the rules and in fact according to them they have changed the rules and they are now arguing that it is actually their policy over at the DOJ to not include hotels or golf courses or resorts who house foreign officials who come over here to the United States. Payments made to. Those are totally not violations of the emoluments clause, but they are.

You see, just because you don’t like it and just because he’s purged, everyone who was loyal to the US and not to Donald Trump, that doesn’t mean you just get to rewrite the u s constitution. But that is exactly what the Department of Justice is trying to do right now. They are trying to say that Donald Trump letting foreign dignitaries stay in his hotel and they pay that nightly fee and that fee gets processed through the Trump organization, put into the pool of profits and then Donald Trump gets a cut of that share of profits cause he’s the owner. That’s a, that’s an emolument. That is a payment. Yeah, it has to go through a couple of other banks first. But ultimately most of the money that that dignitary pays to stay there or play golf there or host their event there, that goes back into Trump’s pocket. That’s illegal. The founding fathers knew such a thing would be bad for this country, and so that’s why they put this in the constitution and we have Trump’s own DOJ trying to argue in court right now that no, no, no, no, no.

That’s not what the constitution meant. It just meant that no, you can’t walk up to the president and just hand him a gift because that would be bad. Those cash payments to his hotels, to Mar-a-Lago to is Bedminster to whatever it is. Those are emoluments and the danger of the DOJ trying to tell us that they are not. Is that okay? If you want to say that they’re not, then you’re basically sending a message to the world that, hey, you can’t slip money into Trump’s pocket, but you can put it indirectly there by staying in one of these hotels. Really any hotel that has his big dumb name right across the top of it, do that and you’re going to gain favor with this guy because everybody knows that. That’s true. Same thing with any Trump property on foreign soil intelligence experts have actually warned that Trump’s business dealings are a threat to our security for that exact reason I just said, because everyone across this planet, whether they’re an elected official of another country or not, everybody knows how to get on Trump’s good side and get what you want out of him. All you gotta do is slip a little money into his pocket, and the DOJ is in court right now arguing that that is totally cool.