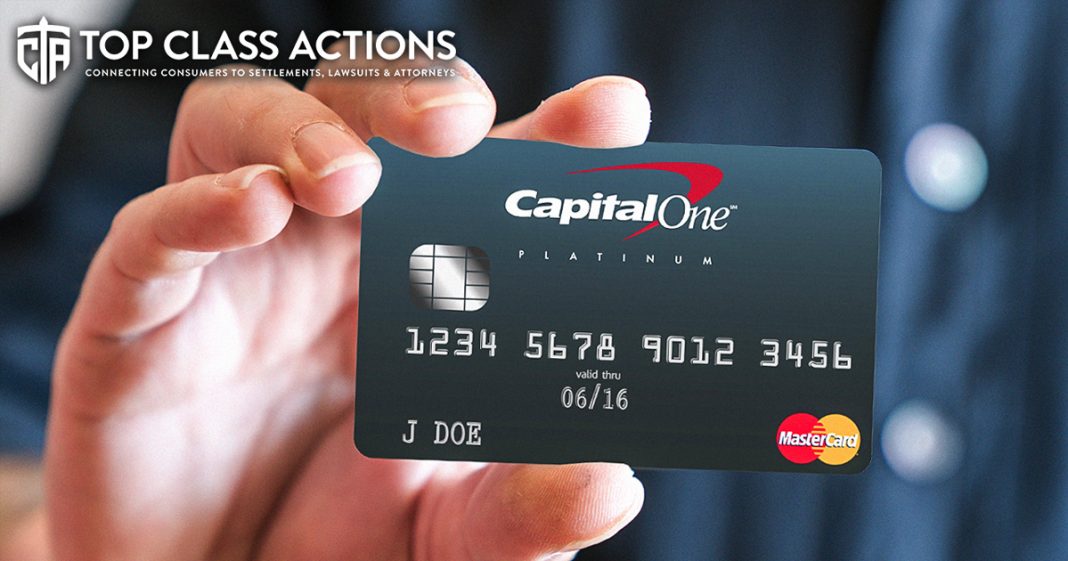 A recent class action lawsuit accuses Capital One of forcing their customers to pay interest on credit card transactions that have been paid off. The plaintiff argues that, like many other credit card companies, Capital One provides their credit card customers with a “grace period” to pay off their balances. However, Capital One allegedly differs from other credit card providers because the company will reportedly rescind the interest-free grace period if consumers fail to pay off their balance in full in a prior month. Ring of Fire’s Farron Cousins discusses this with Scott Hardy from Top Class Actions.

Farron Cousins:                  A lot of the big draws for credit cards these days are zero interest, six months, 12 months, whatever it is. Maybe it’s a store credit card. We’re going to give you six months, no interest on purchases, over $500. Spend away, and as long as you pay off that balance prior to that last day of that six month or 12 month period, we’re not going to charge you any interest. Now, it sounds great as an advertisement, but in practice, some credit card companies aren’t keeping their end of the bargain and according to a new class action lawsuit, they’re actually charging interest to people who have no balance on their cards.

Joining me now to talk about this is Scott Hardy with Top Class Actions. Scott, this is another particularly disgusting story here. We’ve got a big bank in this case, Capital One. They have been accused of charging unfair interest to people who in some cases, as I mentioned, they had already paid off their balance before the end date of the promotion and yet Capital One still said, nope, we’re going to go ahead and just charge an interest anyway. Tell us about this lawsuit.

So instead of having a grace period, when I buy a new product, I go out to the store and I buy a gift from my beautiful wife. Then I would expect that I have until I get my credit card statement, write a check, I won’t pay interest on it. Nope. If you carried a balance from the previous month and paid interest, Capital One may very well be charging you interest on those purchases. Even if I get that statement and I pay everything back, Capital One is still charging me interest on a pur, on a purchase that I just made.

And that is sneaky. And you know, frankly it’s surprising with Capital One and they’re a huge bank and they do so many advertisements. You would think that they’d be making enough money that they wouldn’t have to go about things in this manner and charge consumers interests for a purchase that they make and get charged interest from that second, that card is swiped according to the class action.

Farron Cousins:                  Okay, so we’re not just talking about a promotional balance at this point than, we’re talking about really any balance. If you take your Capital One card and you go to the gas station right now and you buy a pack of gum the second that card goes through there, or if it’s chip card you wait two minutes, while that processes, suddenly you’re automatically drawing interest on that, that that’s what’s happening here?

Scott Hardy:                          That’s right. That’s what this class action alleges that if, you know, and this is actually goes against what is in their credit card policy. So somebody along the way had said, hey, people are already getting charged interest. They didn’t pay off their credit card bill in full last month. Let’s just go ahead and charge them interest on everything on their account, new purchases and old. People probably won’t even notice. They’re already paying interest. What’s a couple extra bucks?

And so that’s what’s really getting these people. And that’s what caught people by surprise is that they might have, you know, had $1,000 credit card bill paid off $750, charged another thousand dollars that next month. Oh, instead of getting charged $250 in interest on that $250 balance, they’re getting charged $1,250 interest on all of that whole balance, which is, which is shocking and a, you know, if this class action that’s true, quite underhanded and hurtful to their consumers.

That’s what’s in a lot of these agreements here and that’s why these consumers have gotten together and said, listen, Capital One, you’re not upholding your part of the bargain. You want to charge me interest from the second I swipe my card but you told me in the fine print here, that is not what you do. You wait until the next billing cycle to whatever balance I have left on my card.

So if I swipe something today and pay it off in two days and the billing cycle didn’t complete during that time, there should be no interest. There should be no interest according to your own fine print here, but now I’ve got to pay two days worth of interest for this purchase that was already paid off. This is, I want to say it’s shocking, but given the behavior we’ve seen from the big banks over the last 10, 15 years, well actually really back to the 1980’s this is really on par with what we’ve seen from big banks. This is just a new extension of I guess their, their corruption at this point.

That whole grace period and you don’t need that. Let’s go ahead and pat our pockets. So you know, or Capital One might come out and go, sorry, this was a glitch. This is a complete innocent error on our part, we’re going to refund that interest charged to all of our consumers. Probably not. Probably the attorneys in this one, including Jason Rathod of, of Migliaccio & Rathod, you know, these guys are big time attorneys and they don’t file these cases unless they see that there is a vast injustice against consumers. And so we’ll have to see how this one ends up for Capital One.

Farron Cousins:                  Absolutely and consumers need to be aware, and we’ve mentioned this in the past as well, always look at your statements. Always look at any credit card statements you have. Make sure everything looks correct and save the copies, if they’re archived online, great. If you can download a pdf, just keep it in a folder on your computer or on a separate hard drive, keep them. And this story is one of the best reasons why.

So if you have any kind of Capital One credit card, whether it’s directly through Capital One or perhaps a, a store credit card that uses Capital One as their financier. Follow the link in the description of this video, head to topclassactions.com. Arm yourself with all the knowledge necessary for this particular case and while you’re there, sign up for their weekly newsletter. Get all of the information consumers need to know, delivered directly to your inbox every single week. Scott Hardy, Top Class Actions. Thank you very much for taking the time to talk with us about this story.