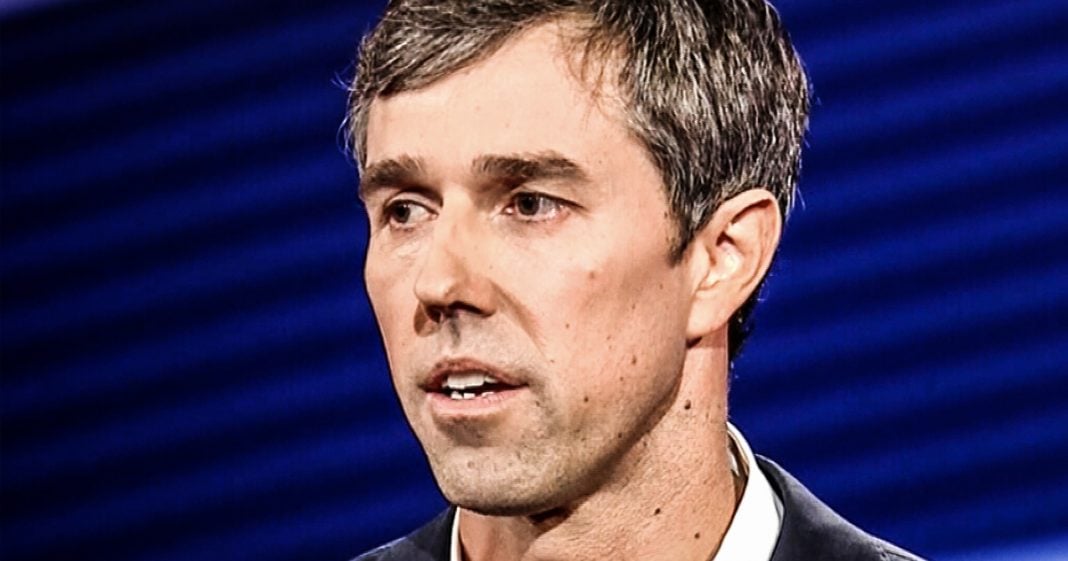 Beto O’Rourke certainly burst onto the national stage when he decided to run for President, and his countertop address to packed diners and coffee shops quickly became a meme. But just one month later, the crowds have dissipated and fewer and fewer people seem interested in hearing his platitudes. His campaign isn’t faltering, but the public has lost interest in O’Rourke rather quickly, and that isn’t going to be good as we approach debate season. Ring of Fire’s Farron Cousins explains what’s happening.

For a few weeks there had really looked like Beto O’Rourke was going to overtake everybody ahead of him in the polls because we had nonstop wall to wall coverage of Beto-mentum headache towards the United States, you know? Oh, the video clips, the means that popped up of him having to jump on countertops so everybody could hear him because the places were so packed in Iowa and now we’re only three and a half weeks past the time when he announced that he was officially running where the crowds, there’s all the coverage. Where’s that Beto-mentum? Ha. It’s kind of disappeared and honestly, rightfully so. Here’s the thing, Beto O’Rourke kind of burst onto the national stage. As we all know, when he was running against Ted Cruz, everybody thought he did a great job. He had a really strong chance of beating Ted Cruz, but he couldn’t pull it off. Still Texas down there, so can’t really fault him for that.

He ran a great campaign, but then as he was gearing up for this presidential run, he wasn’t offering us any policies. He wasn’t offering us anything really other than than some platitudes of let’s go, go high instead of going low, let’s be nice. I like good things. I don’t like bad things. I don’t think I like Medicare for all. And maybe the green new deal is a little iffy. Uh, I don’t know. What I stand for basically was the message that Beto was selling us and in the early days it didn’t matter because a lot of people who supported him and still do, by the way, they were just riding that high from him. Challenging Ted Cruz, not necessarily caring that he had nothing to offer something. A lot of us were saying from day one, great, you’re running, what do you stand for? And we still haven’t gotten an answer.

And that’s why the coverage of Beto was starting to slip. And you may not think that’s a big deal. His polling has not changed. He still at 8% but had he maintained that momentum, he would be much higher than 8% as it is right now. He’s tied with Harris and Warren Warren, who by the way deserves about a thousand times more coverage than she is getting. She has the most detailed policy proposals of anyone running for president and in my opinion so far what we’ve seen the best policy proposals. It annoys me that people seem to forget that she’s even running for president when she should absolutely be one of the top two in polling on, fortunately still at the top of the polling is Joe Biden who officially hasn’t even announced that he is technically running for president yet behind him, very close as a Bernie Sanders in second place, but back to Beto.

Right, and this is what always confused me about it. I don’t like cults of personality, even when it’s around somebody who I support. I don’t like that clinging to the person instead of their ideals. People come and go. Ideals can be carried back and forth. Hell, we had a whole Batman trilogy about it a few years ago. Don’t latch yourself onto the person, latch onto the belief, the ideals, the process, and the goal. But with Beto, there were no policies to latch onto and that’s why it confused me. This was just the guy who gave some great speeches, much like Obama. He was cool. He’s hip. He probably be fun to hang out with on a week, good night. But I don’t want my drinking buddies to be in the White House. Sorry guys. I don’t know. I want somebody who understands policy. I want somebody who knows how to get things done.

I want somebody who knows how to fight back and Beto’s not it, he’s a good politician, but he would be a pretty crappy president because even he doesn’t know where he stands right now. When I say he’s a good politician, I mean he can talk the talk, he can ride that line without taking a stance on any issue you ask him about. That is the mark of a very good politician. Never giving you a clear answer one way or the other. It’s crappy. You don’t get me wrong, but it is typical. It’s what we’ve seen in this country for decades. Well, I don’t know about this, but maybe if we did this possibly, but they could be somewhere in the metal and that’s who Beto is. The guy who’s just ride in the middle of the line hoping that nobody ever asked him a very serious question about his policies, because as it stands right now, he really only has one or two and even those, he hasn’t even explain how he’s going to put in place.