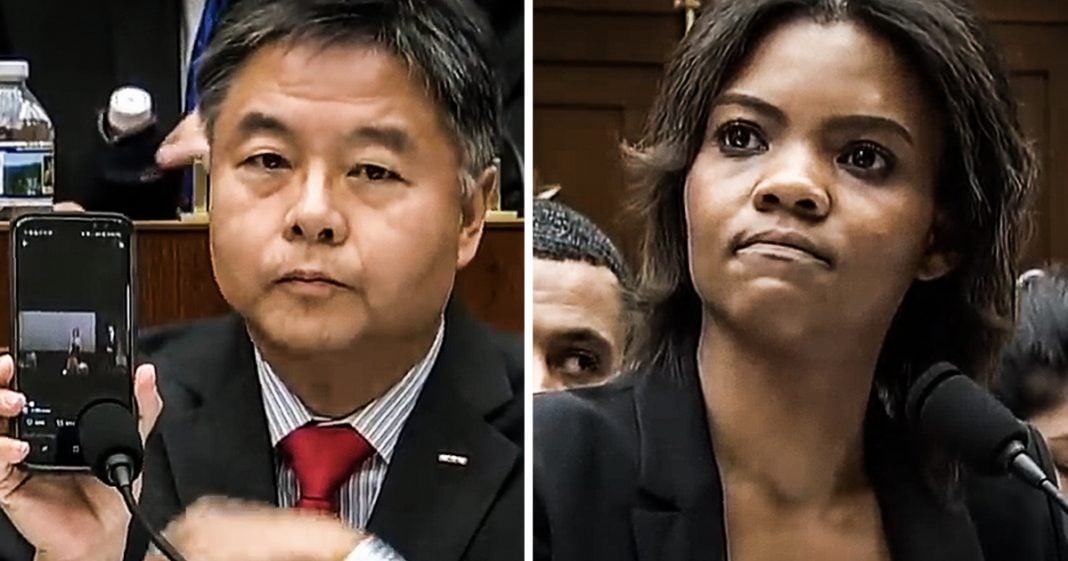 Democratic Congressman Ted Lieu has a reputation for calling out things that other lawmakers are reluctant to call out, and a hearing this Tuesday was no exception. When Republicans brought in right winger Candace Owens to tell us that hate crimes aren’t actually happening, Congressman Lieu took the time to show a clip of Owens apparently making excuses for one of the worst human beings to ever walk this earth. Ring of Fire’s Farron Cousins discusses this.

Yesterday, Congress held a hearing on white nationalism and the rise of hate crimes here in the United States. A hearing that’s been needed for quite some time. Democratic representative Ted Lieu, however, was a little annoyed, rightfully so at the Republican’s decision to bring in Candice Owens from TPUSA. Uh, one of the worst organizational names in the country. By the way, I’m surprised they didn’t think about that beforehand, but nonetheless, ted Lieu was upset that they brought this woman in who really has no reason to be speaking on this issue. The Democrats brought in experts and the Republican’s bring in a right wing talking head who just a few months ago had to actually clarify comments that she made that made it sound like Hitler wasn’t such a bad guy and Ted Lieu decided to play those comments for everyone in the room just to remind them. The kind of person that can to show one is here’s a clip.

Thank you, Mr. Chair. In congressional hearings, the minority party gets a select its own witnesses and of all other people that Republicans could have selected, they pick Candice Owens. I don’t know Ms. Owens, I’m not going to characterize her. I’m gonna let her own words through the talking cause I’m gonna play for you the first 30 seconds of a statement you made about Adolf Hitler.

I agree. I actually don’t have any problems at all with the word nationalism. I think that it gets, uh, again, the definition gets poisoned by lead us. It actually want globalism. Globalism is what I, what I don’t want. So when you think about, whenever we say natural isn’t the first thing people think about in at least in America has Hitler. Yeah, he was a national socialist. But if Hitler just wanted to make Germany great and have things run well, okay fine. All of them is, is that he wanted, he had dreams outside of Germany. He wanted to globalize. You wanted everybody to be German. Everybody that you speak in Germany.

All right. So my first question is to Miss Herschov. Ms. Owen said quote, if Hitler just wanting to make Germany great and a hair things run well. Okay, fine. The problem is that you wanted, he had dreams outside of Germany. So when people try to legitimize Adolf Hitler, it does that feed into white nationalist ideology.

He thinks all black people are stupid. Yeah, because going to an ad homonym you know, just overarching attack on a sitting member of Congress is always a smart idea. Candace. No, listen, I get it. And you even later went on and said Hitler was a horrible human being. Totally fine. Um, but if you ever find yourself in a situation where you have to clarify your remarks about Hitler, then you’ve already lost. You’ve already lost. And all of the people coming out and defending. What Candace though isn’t said saying that everybody took it out of context. They played the video folks, they played the video. Those were her words. You can spin it any way you like, but in spinning it, your denying the basic reality of what just happened. Nobody’s buying into your nonsensical BS lies. Candice Owens is an apologist for the Republican Party and the reason they put her out there is because they think it’s a great idea to have a non white face out there. They do and they pay her a fuck ton of money to do it. Mercer money that helps start TPUSA foster freeze the coke institutes and their various foundations that they fund. They’re all funneling money into TPUSA, paying her salary, pay in the salary at Charlie Kirk. And these kids are morons. They’re absoutely utter morons, but they’re all so stupid enough as Candace Owens just proved to say whatever you want them to say, as long as you give them a ton of money.