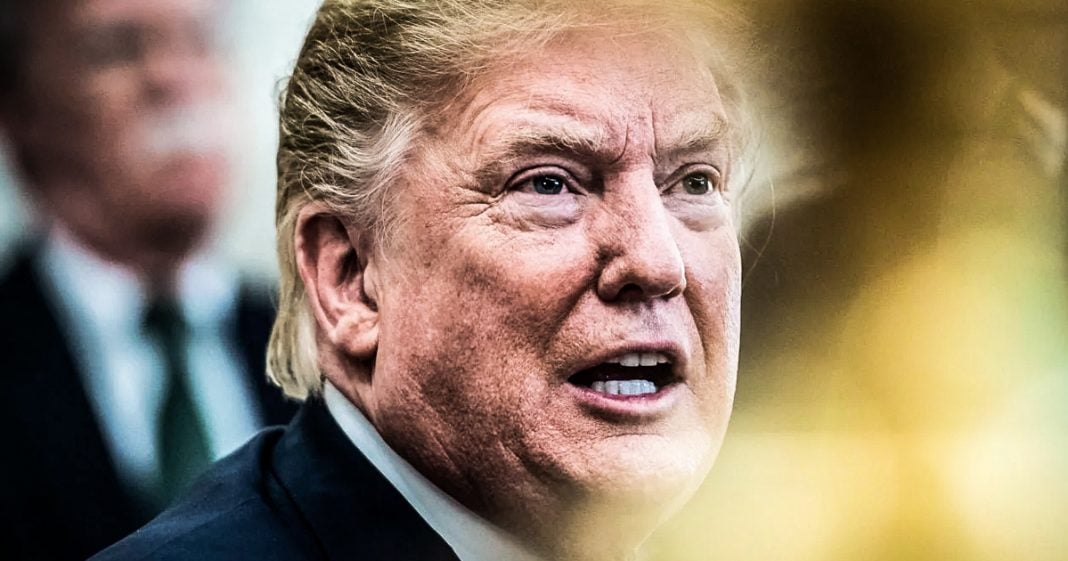 Reports are swirling about Republicans secretly freaking out over Trump’s continued purge of the Department of Homeland Security, with the number of ousted members now up to 3. But as usual, these Republicans will do absolutely nothing as Trump attempts to gain supreme power by putting people in those jobs who have no problem breaking the law. Ring of Fire’s Farron Cousins explains what’s happening.

Well, we now have three people that have been purged from the Department of Homeland Security. We have the director of the secret service. We have Kirstjen Nielsen, who was the head of the Homeland Security Department, and now the number two, the acting deputy secretary of homeland security has now been ousted by the Trump administration. And even before the acting deputy secretary was ousted, republicans were already out there telling us how concerned they are about what’s happening here. You had chuck Grassley talking to the Washington Post saying he was very, very concerned. He said that on Monday you had senator John Cornyn telling Politico that those, this whole thing is a mess. And the problem is that all of these republicans out there expressing their concerns, panicking, freaking out according to some headlines. That is the extent of what they’re willing to do against President Donald Trump. They’ll panic, they’ll freak out. They’ll occasionally talk to a newspaper and say, oh, I don’t like what’s going on.

And then they’ll completely forget about the fact that they actually have the power to do something about it. They’re just too weak and cowardly and spineless to actually do it. See, that’s the problem here. We have seen reports since the first month of the Trump administration coming into power of Republican’s freaking out. Republican’s panicking, Republican’s biting their nails and closed door meetings. They’re so terrified of Trump. He’s bad for fundraising is bad for policy. His approval rating suck. Was he a trader? Oh, we have intelligence officials. Should we do the 25th Amendment? We don’t know Paul Ryan. It just came out, said I’ll never support him. Never. I always said that when I was speaker of the house until I retire. But you guys all had power to do something. You all, some of you still have power to do something, so don’t sit there and go, Ho hum, this guy’s crazy.

I wish I could stop it. You absolutely can. You absolutely can. You just don’t actually want to, and that’s the thing that we have to start realizing as a public. The Republicans do have plenty of power. They could end Donald Trump’s presidency today. They could end it today by invoking the 25th amendment, because there’s no way in hell that man would ever be able to prove he’s mentally competent enough to retain his position. And he would be removed from office, but that has to be done. Or one of the avenues where it could be done is in the Senate, can’t do it in the house where the Democrats have control, unfortunately. But Republicans who control the Senate, they could, and I’m sure they’d be able to get enough democrats to go along with them to make it happen, but they won’t because they don’t want to.

They want to have their cake and eat it too. This is a perfect of that. They want all of the policies that Trump is up there doing, but they also want to have the ability to occasionally go out there and say, oh, I don’t like what he’s doing, but there’s nothing I can do about it because most of the public doesn’t understand that the Republicans could do something about it. So the public goes along thinking, yeah, Trump might not be that great, but you know, and my Republican Senator John Cornyn, or Chuck Grassley, or whoever it is, they’re, they’re telling me they wanted to stop him, so I should keep them in office. Yeah. Not how it works. Any one of those people could form a coalition today to bring about the end of this madness in Washington DC. But you have to understand a simple fact, none of them actually want Trump removed from office.