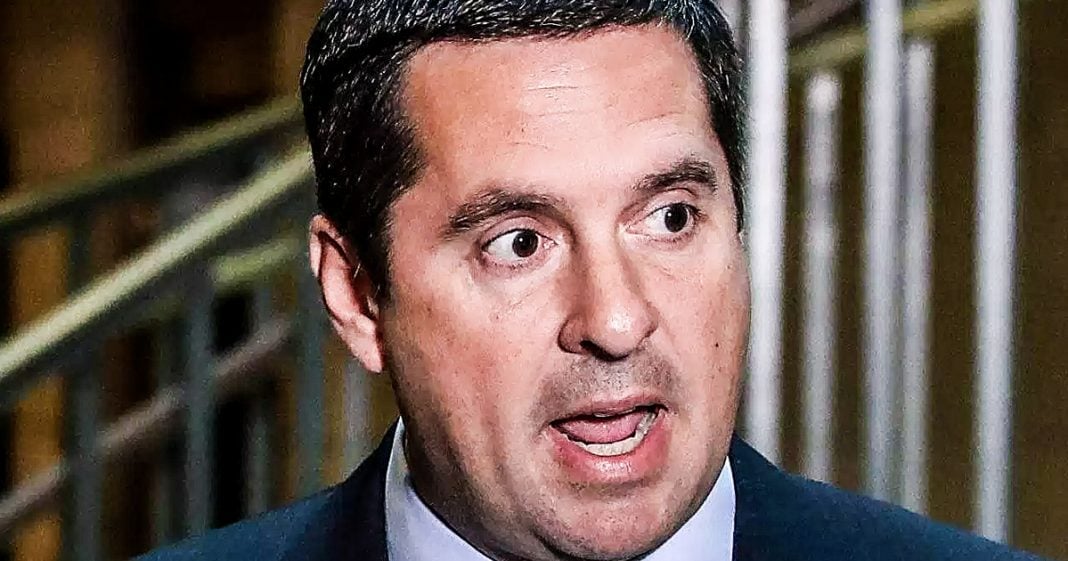 Devin Nunes should have stopped when he sued a fake cow for defamation, but the California Congressman doesn’t know when to take a loss. He’s now suing the Fresno Bee newspaper over an article they printed last year detailing lurid sex parties that happened at a fundraiser for a winery that Nunes owns a stake in. The paper didn’t implicate Nunes in the events, but he’s still mad as hell. And, as Ring of Fire’s Farron Cousins explains, that’s not even the funniest part of this ridiculous lawsuit.

Devin Nunes has to be one of the absolute dumbest people on Twitter. You know, just a few weeks ago it was announced that he is suing to parody accounts on Twitter. Devin Nunes, his mother and Devin Nunes is cow because he believes they’re making fun of him and you would think that after the huge backlash he got from that with the entire country calling him stupid and actually rallying behind a fake cow on Twitter, you would think he would say, okay, you know what, I’m going to take this loss. This was probably pretty stupid and I’m going to back off. But no, not Devin Nunes Nunes is just dumb enough to double down and he’s doubled down now by suing the McClatchy owned Fresno Bee for a story that they published last May. The story that we covered here on ring of fire after it was published in the Fresno Bee and that story is that a winery that is partly owned by Devin Nunes held a fundraiser on a yacht that involve drug use and prostitutes, you know the yacht cocaine prostitutes story, which also helped that Hashtag to start trending yesterday because of Devin Nunes. This lawsuit and the irony there is that in the lawsuit there’s two ironies. The first one, pretty simple, the irony says that, oh well this story got published and it never actually said Devin Nunes was a part of this, are implicated him in it. It didn’t even say they knew how much of the winery he owned. He was never a part of it.

Just the Co owner of this winery that did it and that’s exactly what the story said. They made it clear. Nunes was not associated with this, but by suing them and saying in their lawsuit that, oh well this story took off on social media. That statement and the actual lawsuit made the story take off on social media and that’s why we got that Hashtag trending yesterday and I hope it continues to trend to show Devin Nunes how stupid he truly is. But don’t think that Nunes is hogging all the stupid for himself. Oh No. His lawyers are plenty of dumb as well because not only did they say that all we got on social media and did some things, but as lawyers in their filing included screenshots of some tweets from the author of the article, Mckinsey Mace, and they claimed that Mckinsey Mays bolded certain words on her Twitter feed as some kind of coded message to implicate Devin Nunes in this yacht cocaine prostitute party. She bolded words, something that no other Twitter user is able to do, but somehow Mckinsey May’s hack the main frame and got in there and got the feature to make words bold.

They didn’t say she hacked the mainframe, but they said that she somehow bolded these words as a coated conspiracy. But what actually happened, again, because Twitter doesn’t have a bold feature, is when you search somebody’s Twitter feed or search anything on Twitter, the words that you search are bolded on the results page so that you can see where they are. So Devin Nunes is moronic lawyers search through this woman’s Twitter feed, looking for certain words, Nunes, cocaine, prostitutes, whatever it was. And then when they found them, they were bolded, but they were too stupid enough to know how the search function works. So they thought, Oh my God, we’ve stumbled onto a grand conspiracy. So I guess what I’m trying to say here is, congratulations, Devin Nunes. Because somehow some way you, the dumbest man on Twitter managed to go out and find a team of lawyers who just happens to be as stupid as you are.