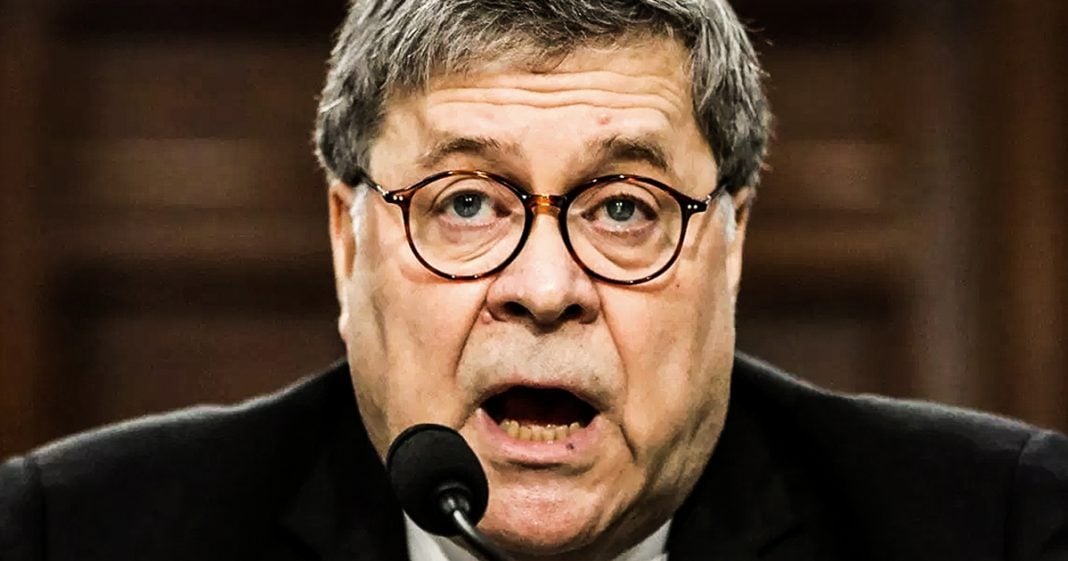 Attorney General William Barr has already had to walk back his ridiculous 4-page summary of the Mueller report, and he may have to walk it back even further once the report is handed over to Congress in the coming weeks. The US Constitution actually gives Congress the authority to police obstruction of justice for the Chief Executive, but Barr took it upon himself to clear the president without considering the evidence. Ring of Fire’s Farron Cousins explains what this could mean for Trump and Barr.

So Attorney General, William Barr told us yesterday that no, he is definitely not going to release the full unredacted Mueller report, but he will release a redacted report very soon. I’m not good enough, but I guess it’s something, right. But here’s the thing, and this is what several former members of the justice department have actually been out there saying recently, and that is bar already jumped the gun and overstepped his authority by immediately clearing Donald Trump of obstruction of justice according to them, that wasn’t bars decision to make actually, even though Mueller kicked it over to them. In fact, that decision, according to the US constitution should reside within Congress, specifically the House of Representatives. And the reasoning is because the House of Representatives has the sole authority to begin impeachment proceedings. And if the president did commit obstruction of justice, that would absolutely be something that would be an impeachable offense. But because they have that power in the house, they should not only have access to the full unredacted Mueller report, but bar should have never said a word about the obstruction of justice to begin with. Congress can, and I’m convinced eventually we’ll get their hands on the unredacted Mueller report because the constitution calls for that. Yeah.

If they chose to go this route, here’s the way it could happen. They could begin impeachment hearings and then as part of the evidentiary phase, they could, especially because it’s something so important, get their hands on the untied your entire unredacted Mueller report. Then they could go through it. Look at the things that a Mueller said was obstruction of justice, determine if intent was there. Because if there was no intent, then there was no obstruction. But if they find the intent, then they can move forward with impeachment, which would unfortunately be a completely meaningless effort by House Democrats because the Senate Republicans will never vote to convict and remove. So that is how the Democrats in the house could get their hands on the full unredacted Mueller report. But unfortunately it’s not going to change the outcome. And that’s what’s so disappointing about this. Not Saying, oh, we can’t get Trump out of office.

No, it’s that we can’t get the full unredacted Mueller report and have it actually mean anything at this point. The public has made up their minds and unfortunately for Trump, most of them actually still think it shows that he committed some of crime. May Not be collusion, but it could be obstruction of justice. It could be a financial crime. It could be a plethora of things. Since Mueller had full scope to go after whatever he found, even if it wasn’t related to collusion, something that the victory lappers seem to be forgetting. Mueller was given broad scope to go beyond just collusion, but they said no. It was started because of collusion. May have started it, but that wasn’t a limited focus of Robert Mueller. He was allowed and given permission and instructions to go after anything that he thought may have been a potential criminal activity on behalf of anyone that he comes across in the course of the investigation.

That’s why we need to see it. I’ll take their word that collusion didn’t happen. That’s fine. Even if it did, you never going to be able to prove it and it’s really not going to be something that would even result in his impeachment. But if you found financial crimes in there, something at a state level where he couldn’t be pardoned, we’re impeachment, doesn’t matter, and you can just kick it over to a state prosecutor to throw him in jail. Yeah. Those are the kinds of things that we need because those are going to be the only ones that have any real power, any federal crime committed, and this guy is going to be pardoned faster than Richard Nixon. That’s why we need the report and Congress does have the authority to get it. The question is, are they actually going to use their constitutional power to make it happen? Guess we’ll have to wait and see.