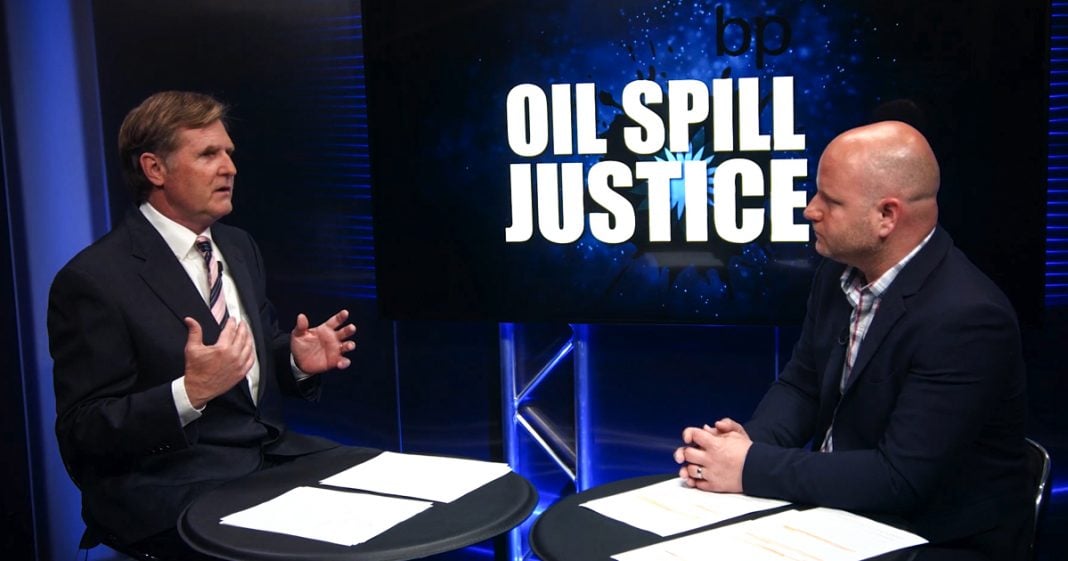 Thousands of workers who helped clean up the 2010 BP oil spill have developed serious health problems and so far the company has been refusing to pay for the healthcare costs of these workers. Ring of Fire’s Mike Papantonio and Farron Cousins discuss this.

Mike Papantonio:             Thousands of workers who helped clean up the 2010 BP oil spill have developed serious health problems and so far the company has been refusing to pay for the healthcare costs of these workers. You know, hits us very close. I handled, handled a lot of cases along the coast here. This is, this is a real troublesome case because of the very people who were asked to go out and clean up.

Okay, we got a total disaster, if you don’t gain control of this, if you don’t do everything you can to clean this up, the ecosystem is going to be toast. Not to say it ever fully recovered. It hasn’t fully recovered. But these people that went out there and did what they were asked to do and were lied to by the government and by BP. You understand the federal government lied to these workers.

Mike Papantonio:             The federal government said that this disbursement that they’re working around has no toxic qualities that they should be worried about and of course BP lied and that’s no surprise. But you would think the federal government could be at least honest with the workers that are out there supposed to be cleaning up. Well these people dying of cancer. They’ve got all types of cancers. They have all types of neurological diseases. They have skin diseases, they can’t even explain. They have eyesight problems.

And so, so what’s happened here, and I know the inside of this a little bit, but you got a guy named Matt Garretson. Garretson, Garretson was one of the, the people that’s in charge of trying to administer the, the, the, the money here. Garretson, the best way I can describe it is it’s almost like Garretson, who’s supposed to be administering this payout to these people, Garretson is trying to impress corporate America with his evenhandedness.

Farron Cousins:                  You know, what’s really interesting about this, and as you mentioned, you and I, we, we worked a lot on this. You, you, you on the legal side, me on the media side on this with you. And I remember when it first happened. You know, we’re, we’re in an area right on the water here. It affected us every single day, but coming to work every day and you see the big buses of these people that BP has put together to go out there and help clean up.

These were not BP employees. These were not, you know, people that had been with the company forever. These were people that needed jobs along the Gulf Coast. BP needed people. They went in to the little tent, they signed their name, they got this job. They had no idea and BP felt no obligation to tell them the dangers of these chemicals.

I saw them every single morning on the buses heading out to the beach to clean this stuff up. Some of them died in as little as four years from the cancers they developed from this. Now this woman tells this horrible story right here. It’s not right to hear my baby cry, still cry every night and wonder why she can’t go to heaven and visit her dad.

Farron Cousins:                  And this is a guy who like so many others decided, I’m going to help out. I’m going to do what’s right. Yes, I get paid to do it, but I’m going to go take care of my community and clean this up. And as you pointed out, the EPA said, Corexit is fine. This dispersant, totally safe. But that only came out after they had originally said, it’s so toxic, we don’t want it used in the United States. But BP said, hey, we need to do this. We need this out there. So they changed their ruling on it and said, all right, dump it by the barrel into the Gulf of Mexico so these people can breathe it up, who are doing their best to fix the community.

What it was meant to do, it was meant to cover people who have, you know, they’re it’s very clear they don’t have a clear diagnosis because the doctor’s shaking their head saying, I’ve never seen this before. I’ve never seen skin come off a person’s body for no good reason. I’ve never seen eye, eye abnormalities that I’m seeing. This, this was, it was a collection of new diseases and I mean they have a name for them I suppose, but the way they were manifesting themselves was a lot different from anything that most medical doctors had seen.

Farron Cousins:                  And it’s also interesting too because even before we saw these diseases start showing up in people and human beings within about six to eight months of the oil spill happening and the disbursements being dumped into the Gulf of Mexico, I, I was doing reports on it. We were seeing these diseases pop up because we had all the oceanographers down here and, and marine life and dolphins and turtles and all other fish and mollusks that they had never seen before. These are new diseases developing in the dolphins. You know, they have heart disease now.

Farron Cousins:                  Yeah. That they had never, ever had and it is because of these chemicals. And then later on we find out, oh well it’s doing the same thing to people here.

Mike Papantonio:             Punch line is nobody went to prison as we speak. Nobody went to prison, even though we know that, you know, BP, BP has this long history of embracing the, the regulatory types. Bringing them, giving them jobs. Saying, look, Joe, you work with us on this. I’m going to give you a job. When you get out of here, it’s going to be paying three times the amount of money you’re making as a regulator. We see it all the time. This particular case was, was, was, it was one of those cases in form.