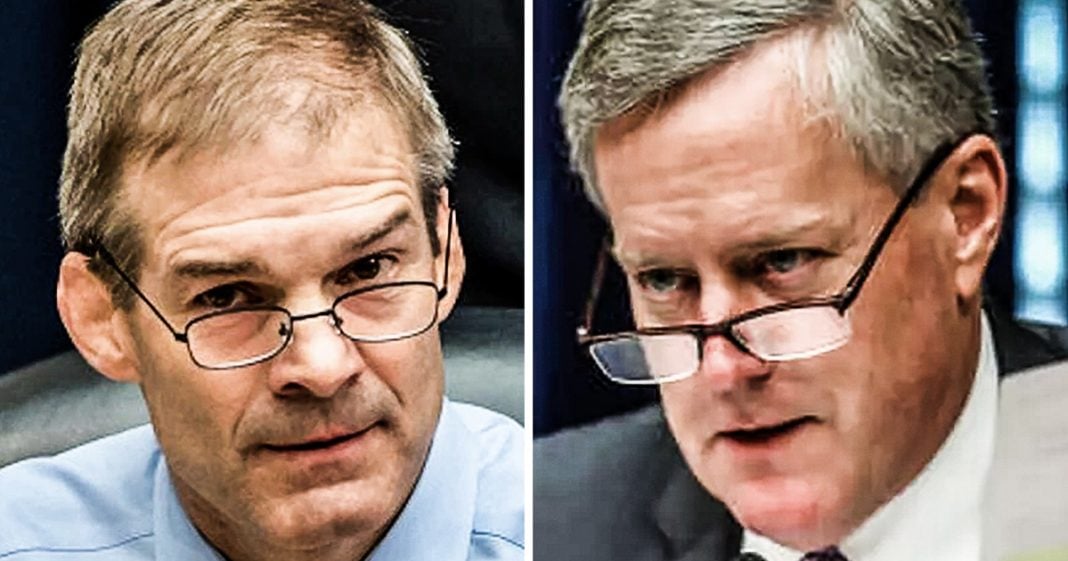 Democrats in the House of Representatives want answers from drug company CEOs about their continuously inflating prices. But Republicans Mark Meadows and Jim Jordan are actually telling these CEOs that they SHOULD NOT cooperate with the Democrats because they claim it is a big conspiracy to cause pharma stocks to drop. These men are not well, but at least they would be able to afford medication for their conditions if the Democrats are successful. Ring of Fire’s Farron Cousins discusses this.

Democrats on the House oversight committee have for several months been trying to get information from pharmaceutical companies on how they set their prices. You know, ever since they took over congress, that’s been one of the things they’re working on. Not one of the things that necessarily gets the kind of headlines is, you know, trying to impeach or anything like that. But this is actually even more important because Democrats are actually doing good work. And I know people like to just rag on them for hating Trump. But again, they’re doing things that need to be done unlike the Republicans. And this is one of them.

Nonetheless, they want to answer some CEOs on how they set their drug prices and why in God’s name are we pay in more over here in the United States than anywhere else on this planet. And then this week we find out that two Republicans on that oversight committee, Mark Meadows and Jim Jordan actually sent a letter to these pharmaceutical CEOs telling them to not cooperate with the Democrats request for documentation. Republican’s are actively undermining this investigation and this inquiry really, cause it’s not even a full blown investigation, but Jim Jordan and Mark Meadows are out there telling these pharmaceutical CEOs do not, do not agree with them. Do not cooperate with them. Don’t hand them this information. Why? Oh, according to Jordan and meadows because it’s a big conspiracy. I wish I was making that up. But they specifically said in their letter to the CEOs that what the Democrats are trying to do is they’re trying to drive your stock price down and if you give them this documentation, it’s gonna kill your stocks. That’s the goal of these Democrats. They don’t care about drug prices. They just trying to take your stock to make you lose some money.

These men are insane. Mark Meadows and Jim Jordan are insane and it, and ironically they would actually be able to better afford medication for their mental conditions if they would just let the Democrats finish their work. But there is something wrong with these two men. There is something absolutely mentally wrong with Mark Meadows and Jim Jordan. This isn’t normal behavior. It’s not. You have an issue right now that almost 90 frigging percent of the American public says is a huge problem and that is being overcharged for prescription drugs. Massive, overwhelming majorities of every political denomination in this country say that this is a big issue that we want fixed. We want it changed. We want those prices lowered and you actively have one party with a couple of psychos in there telling these drug companies, CEOs don’t do it. It’s a conspiracy. I they’re all out to get us.

Do you have a foil hat I could borrow for a few minutes? These men are nuts. They should be removed from office. And I don’t mean via election. I don’t believe that either of these men is competent enough to be serving in the US House of Representatives. Furthermore, neither of them seems to have the best interest of anyone in this country at heart. The only people they care about are wealthy CEOs. Why? Because they want that money. They want those campaign dollars. They want to win the next election, and if they have to screw over their own constituents to do it, then so be it. They can buy him back with all that money they’re going to get from the drug companies or the health insurance companies or the hospital corporations or big oil or whoever the hell it is. That’s why Republicans fight these issues that a majority of, even their own voters say we have to address because they know at the end of the day they’re going to get money from those companies.

They’re going to run for reelection and then suddenly everybody in their district forgets what a horrible piece of crap they truly are and unfortunately they’re right. Constituents forget. They stop thinking about it, they move on, they fall for a glitzy speech or maybe a fun filled town hall and they forget all about the horrible, crazy things that people like Mark Meadows and Jim Jordan have done will trust me. I’m not going to let you forget and I’m going to hammer on this repeatedly because both of these men deserve to be unemployed for the remainder of their days. Jim Jordan, possibly more so than meadows because Jordan has even more skeletons kicking around in his closet that for some reason those voters just continue to forget about, but not this time because we’re not going to let them.