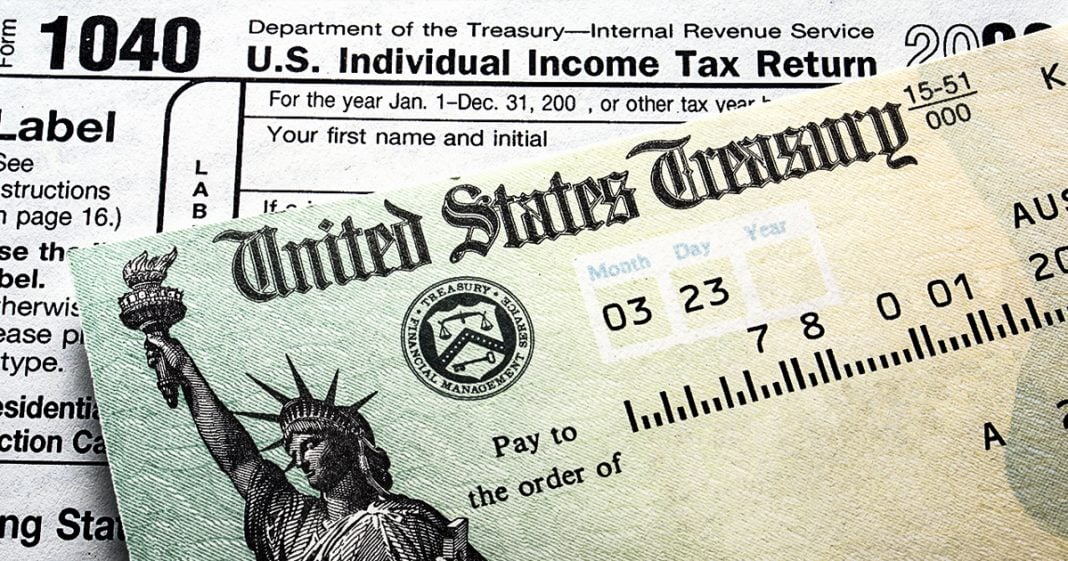 The results are in regarding the Republican Tax Scam, and average American citizens are the big losers. According to the IRS, they’ve sent out about $6 billion less in refunds this past year, which is a clear indication that most citizens actually DID end up paying more in taxes. Meanwhile, the largest banks in the country got an extra $28 billion last year from the Republican tax cuts, showing us who this was really for. Ring of Fire’s Farron Cousins discusses this.

According to the latest numbers from the IRS itself, tax refunds for average American citizens have so far fallen this year by $6 billion, that $6 billion that would have gone back to the average American consumer, the workers, the people that actually make this country run because we’re the ones out here doing the stuff nobody else wants to do. Yeah, everybody wants to be a wealthy CEO, but nobody wants to get their hands dirty to keep the machinery running or to fix your car or to take care of your house and build things. Those were the people that needed these returns. But thanks to the Republican tax scam, we’ve been screwed out of $6 billion. Now admittedly, they have so far gotten in fewer tax filings than they had last year. Not a ton, but a few and certainly not enough to make up for that $6 billion difference. But the reason the $6 billion that was taken quite literally out of our pockets is so important is because we have to remember that under the GOP tax scam, the big bankers received an additional $28 billion in tax cuts last year.

Bankers alone got an extra $28 billion while we, the rest of the country lost $6 billion. The average refund so far this year is down $20 that may not seem like a lot to you, but if you take somebody who’s making only 15 to $20,000 a year, guess what? $20 is a hell of a lot of money. $20 could be the difference between being able to afford a prescription or being able to afford a copay to go to a doctor versus not having that. Not to mention the fact that it doesn’t matter how valuable $20 is to you or to anyone else. What matters is the fact that we were all promised by the Republicans by this administration, that all of us, we’re going to get a tax break. We are going to get a tax cut and instead we’re getting less money back and I know the Republican argument is because when, no, no, no, no, no, no wait.

It’s because they’re taking less out of your paychecks, which nearly everyone in this country says, yeah, that’s not true. My paychecks didn’t change. Then you can look at the polls on that. People like, no, my paycheck didn’t change. Don’t tell me that I’m the one ignoring reality. When I have the stubs, I have the receipts and I can prove that I didn’t reduce the amount of money I paid in to the IRS this year. The only people who could have possibly seen a reduction in the amount of tax is taken out of their paychecks would be the people who actually took the time to go to their human resources department and refill out their paperwork to change how much money was being taken out of their checks. See, Republicans like to leave that part out. You the person actually has to physically go and do that in most instances, and we don’t, we don’t necessarily have the time.

We don’t necessarily care that much. If they take out too much in our paychecks by a couple of bucks, great. We get a bigger tax return, but nope, they’re taking that away from us too because we didn’t get a tax cut and I cannot hammer that point enough. And I hope that the anger that is brewing in this country over this and the realization finally among the few last holdouts that Republicans are lying about trickle down economics. I hope that this lasts until the 2020 election. I hope that it lasts until we go to the polls. And I hope that every single Democrat running for president hammers on these numbers every single day. They took $6 billion out of the pockets of American workers so that they could give $28 billion to the bankers who have routinely and repeatedly screwed us all over. That was the intention of this Republican tax scam, and it is working exactly as they wanted it to.