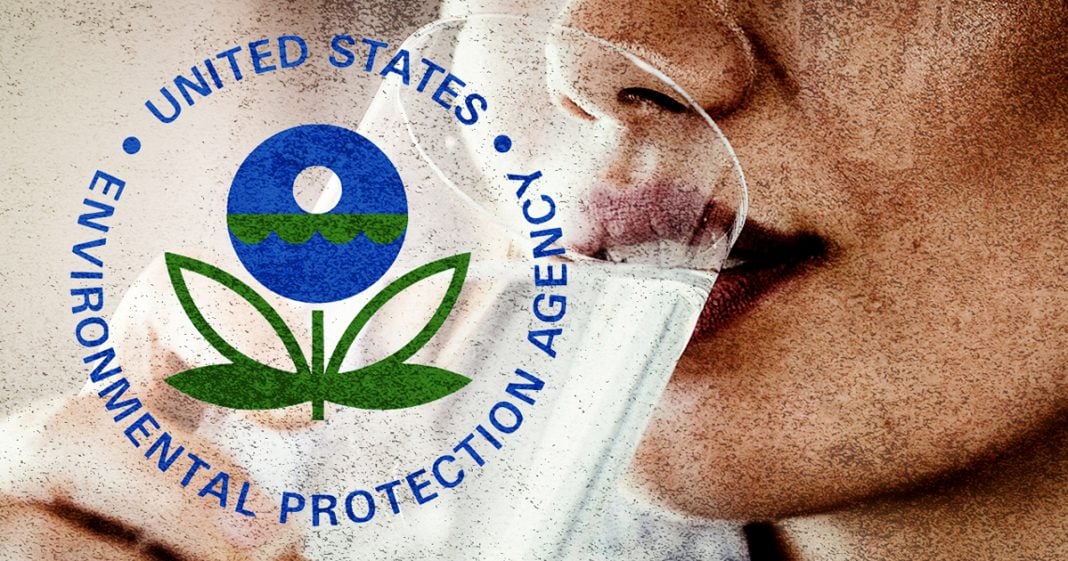 In an incredibly rare and alarming move, the Inspector General of the EPA has had to issue a “management alert” stating that the EPA’s information about certain toxic chemicals is inaccurate. This alert is more for the agency than the public, but the EPA only has 15 days to correct their errors and get that information out. The EPA is lying to the public and making it seem like we’re safer than we actually are, which begs the question of what kinds of toxins are we being expose to? Ring of Fire’s Farron Cousins attempts to answer that question.

Terrifying news out of the EPA yesterday when the EPA’s own inspector general was forced to issue a management alert telling the agency that they’re literally lying to the American public about the dangers of toxic chemicals that we are exposed to. Now, before I get into the issue, I just want to reiterate that the inspector general of the EPA had to issue a warning to their own agency because they’re lying about our exposure to toxic cancer causing chemicals on a daily basis.

Have you seen this story yet on it, on any of the corporate news outlets? Just wondering anybody maybe let us know in the comments, maybe tweet out of say, yeah, I saw it. Send us a clip so that we can verify that other people are talking about this crazy important issue. Here’s what happened. The inspector general was going through the EPA files, basically their own internal reports and comparing those to what has been released to the public. And they found out that, uh, specifically the office of Chemical Safety and pollution prevention, which also helps to, uh, monitor toxic releases in the United States. If there’s a a chemical plant that burns down and release this stuff or anything like that. Um, he found that the information they have privately showed some really horrible things, showed a lot of people exposed to contamination. That again includes very a ton real.

He have cancer causing chemicals. Then they look to what had been released to the public and everything that had been released to the public said, hey, things are great. You don’t have to worry about these chemical releases that just happened over, here are the ones that happened up there or down the road. You’re totally cool. And the inspector general had to issue an alert, a management alert to his own agency to say your lying to the American public. And people every day are being exposed to toxic chemicals and they don’t know about it because you’re not telling them the truth. He has given the EPA 15 days to correct the record and come out and warn the public about how bad things are. Okay.

Again, this is a terrifying scenario. You know, we know the EPA is dysfunctional thanks to the people Donald Trump has had running at first Scott Pruitt and now Andrew Wheeler, but this, this is a new low for the administration. We have seen them downplay science act a little wishy washy on all. We don’t know if this certain chemical does cause cancer. We’re going to look into it. We’ll open up a comment period. You have 90 days to let us know what you think, but this is active suppression of contamination happening right now. This isn’t a future problem that they’re already trying to cover up for. These are chemicals and toxic spills or toxic releases that have already happened. Okay?

People have been exposed people, we’ll be developing incurable diseases because of this and that is not an overstatement. Don’t expect anybody in the corporate media to tell you this, and that’s what pisses me off the most about this. This is a genuine public interest story because all of our lives could be at risk. We don’t know. That’s the crazy part. We don’t know where these sites are and we don’t know how bad they are because the EPA, according to their own inspector general, is not telling us the truth.