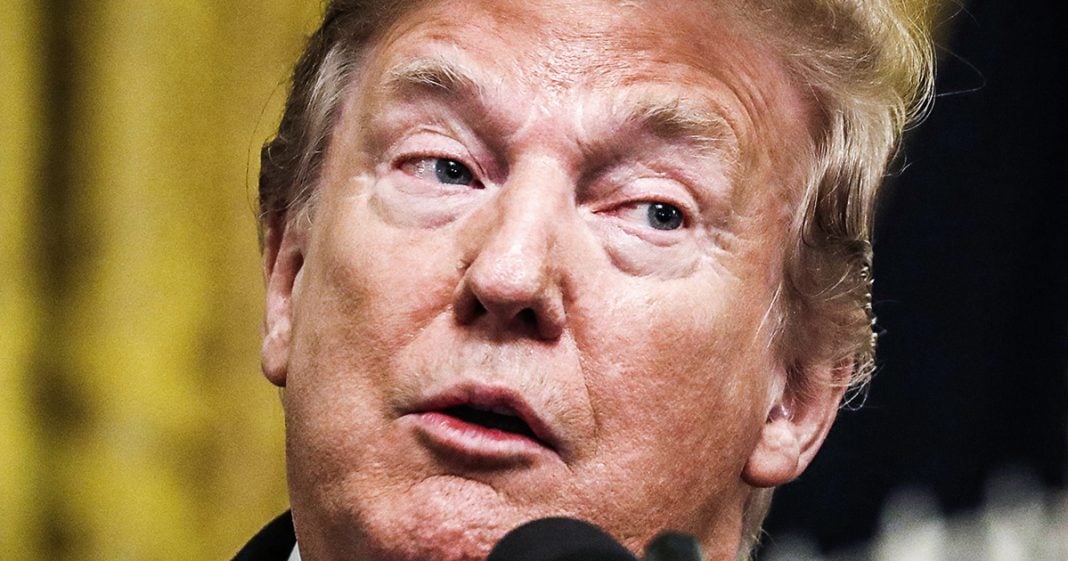 A major fight is brewing between House Democrats and Donald Trump over the president’s tax returns. But Trump isn’t going to sit idly by while Democrats consider subpoenaing these records, and he’s hired a new legal team whose only purpose is to protect those returns and fight off the Democrats. The man is clearly hiding something, we just don’t know what. Is it evidence of criminal activity, or simply embarrassing info that he doesn’t want us to see regarding his REAL net worth? Ring of Fire’s Farron Cousins discusses this.

There is a massive fight brewing in Washington DC right now between House Democrats and Donald Trump. And Donald Trump is preparing for this fight by hiring a brand new team of lawyers whose sole purpose is to prevent the Democrats on the ways and means committee from getting their hands on his tax returns. In fact, it’s actually six years worth of tax returns that the Democrats are a subpoenaing or may subpoena or want to subpoena or may have already subpoenaed. All we know is that they want those damn tax returns and they’re going to get them because on the ways and means committee, uh, that’s actually 100% within your authority to do. They actually have the authority to get the tax returns from any American citizen that they choose. It’s really that simple. They want them, they make the request, they get them into story, but Donald Trump doesn’t want his tax returns released to that committee and more importantly to the American public, which wouldn’t even necessarily happen if the committee got them.

So he’s brought in this new team of lawyers that does not include Rudy Giuliani, by the way. I guess he’s a little tired of him at this point, but it does include some folks who are really on the surface, don’t look to be that incompetent of lawyers, but they are out there right now making the argument here it is. This, according to a statement on Friday, they were, they said the request for his private tax information or not consistent with governing law do not advance any proper legislative purpose and threatened to interfere with the ordinary conduct of audits. We are confident that this misguided attempt to politicize the administration of the tax laws will not succeed. Now, to be honest, from a purely, strictly legal, nonpartisan standpoint, their argument carries a little bit of water with it, right? I mean, as far as we know, what’s the purpose of getting Donald Trump’s tax returns?

Perfectly honest to see if there’s information in there that may warrant some kind of investigation or possibly even criminal charges. We don’t know. We just kind of want them because we want to see what’s going on. So I see the point those lawyers are trying to make now before everybody says, oh my God, Farron doesn’t want to seem no, trust me. I want 30 to 40 to 50 years of Donald Trump’s tax returns. I want them all unredacted and I want them available to everyone in this country because I am also confident there is something in there that he doesn’t want us to see otherwise. We’d already have them kind of like the Mueller report. If it was totally awesome and great, we would already have it. Same thing with the tax returns. Now that doesn’t mean that there’s something in there that shows illegal activity.

It could be something as simple as he’s not worth as much money as he keeps telling us. But even that would technically be an illegal activity because he’s actually gotten loans from banks based on his claimed net worth. And if his tax returns show us that he’s not worth as much as he actually is, those tax returns could then be used in lawsuits against him and criminal charges against him based on what he told the banks. Cause that would be bank fraud. So on the other side, the Democrats have a hell of a lot of good reasons why this is not just a political effort. This isn’t just because we want to see them because he’s hiding them. It’s because, don’t forget, the Democrats are actually investigating Donald Trump on bank fraud right now in the House of Representatives. I know that’s been a little bit lost in the shuffle, but there’s actually a ton of evidence already to suggest that he did commit bank fraud by lying to bank, specifically Deutsche Bank, who by the way is also working with congressional Democrats lying to them about his net worth getting a few billion dollars in loans and that would be illegal.

So yeah, the Democrats 100% do have a rightful claim to make for these tax returns. Trump’s lawyers are going to fight it, but they’re not going to have a ton of luck with it because technically, and this is the most important part, the Democrats don’t even need a reason, legally speaking, there committee that they run has the authority to get the tax returns on anyone. They don’t have to have a reason. They can just do it. So Trump’s lawyers are going to have a hell of a time convincing a court to come along and start to limit the powers of another branch of government because that’s not exactly how these things are supposed to work. Checks and balances. Yes. Stripping their power away from them that they have had for centuries. Not exactly something that courts are inclined to do. So good luck with your legal fight, Mr. Trump. I can’t wait to see when you finally lose this one, and then the public finally gets to see what you’ve been hiding all these years in those tax returns.