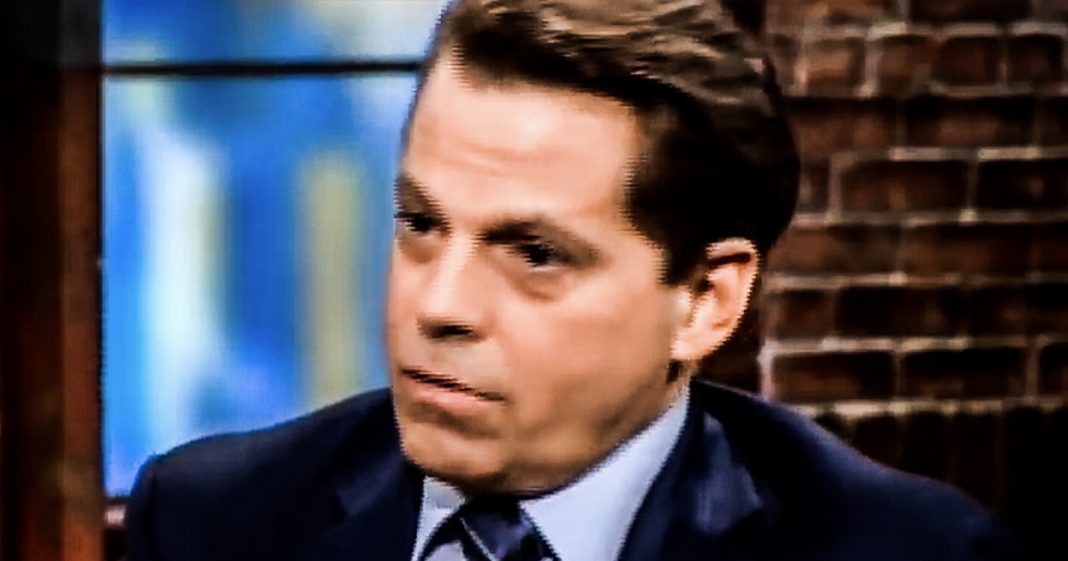 According to a former ten-day employee of the Trump administration, Donald Trump lies all the time because he thinks that it is fun. That former employee is Anthony Scaramucci, a man who was with the administration for less than two weeks before being thrown out as Communications Director. There is nothing fun about Trump’s dishonesty, and it is actually fairly damaging to the United States, as Ring of Fire’s Farron Cousins explains.

Anthony Scaramucci forward. Trump administration employee says that the reason Donald Trump lies so much, it’s because it’s fun. Here’s the exact quote he said on scene and this past weekend, uh, he does it because he thinks it’s fun and he also does it because he likes the fact that you guys are talking about it. So Trump lies one because it’s just totally wicked awesome and too, because if he lies, then the media talks about him. But here’s the thing. Whenever the media talks about him, he also goes to Twitter. It says, ah, the fake news media saying bad, stupid things about me again. Oh, they’re horrible. Donald Trump’s the kind of guy who needs somebody to hate. So I don’t doubt that he does say and do sometimes crazy stupid things because he wants to see the media’s reaction show that he has a reason to go after them with his attacks. But I’d also don’t think that he’s lying because it’s fun. I think that Donald Trump is lying because he has some kind of personality disorder that causes him to lie about everything. Okay.

That’s the thing. These are not lies. Most of them are not lies that benefit him in any way. A lot of them are narcissistic lies like his lie about, no, my, my inauguration crowd was bigger than Obama’s photographs tell us otherwise. But sure. Go ahead and spread that lie. It doesn’t necessarily affect anything. We know you’re lying, but whatever makes you feel better. There’s other lies that serve no purpose at all.

And then there’s also lies, which this is actually the rarest one where he says, oh, economy’s doing great. Everything’s great. I’m the greatest guy because everything’s great because of what I’ve done. Those aren’t true, but I understand you’re a politician now and politicians will typically lie about how great their policies are. That’s a given. We know that’s going to happen with anybody, but it’s the other categories of lies, the narcissistic lies and the lies of no purpose whatsoever. Tim Apple, I said Tim Cook. I said apple really fast. No, I was saying Tim Apple. Yeah. Your story kept changing for no fricking reason. You could’ve said, oops, sorry. I misspoke there. Whoops. I’m a being. Just like the rest of us. You couldn’t even do that now. Scaramucci did go on to say in the CNN interview that he’s told the president, hey, you’re doing great. What’s with all the lies? You don’t have to do it. Everybody already loves you. Anyway, that’s in Scaramucci again, said, well, he does it because it’s fun.

Let me tell you if Trump’s doing this because it’s fun. He is the only one having any fun. Do you know what was fun was when we did have that eight year period where we didn’t have a president who went in front of the public and lied to us every single day, which is what Donald Trump does now. Love Obama, hate Obama. Whatever you want to say about Obama is fine, but at least we all have to admit the dye guy didn’t get out there every single day and lie to our faces and that was slightly refreshing. Yes, he wasn’t always the most honest about everything, especially what he was doing over in the Middle East, but most of the time he was honest. He just wasn’t very strong with pushing his policies. But that is a discussion for a different day. Lying is not fun. Having a president who is incapable of telling the truth is not fun in a Scaramucci is being honest and Trump actually does think that lying is fun. I’d go ahead and say that that’s probably enough grounds already, just on that statement to go ahead and call for the 25th amendment so that we can get somebody to take a good close examination of what kind of demons Trump has kicking around inside of his brain.