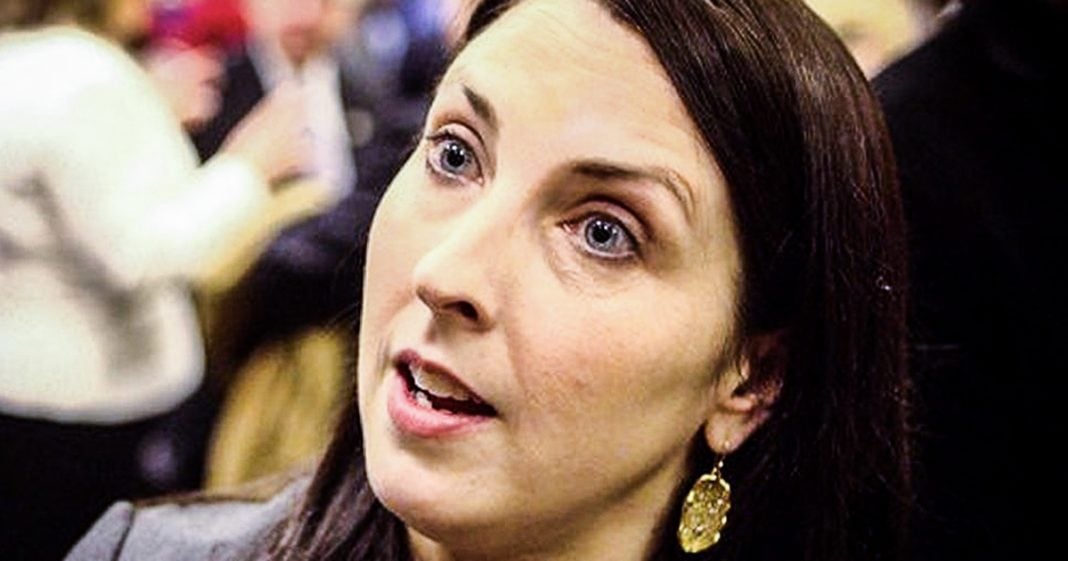 Ronna Romney McDaniel, the chairwoman of the Republican National Committee (RNC), penned an op-ed recently where she praised president Trump for packing the entire US court system with partisan Republican hacks. She talks about how the entire judiciary has been reshaped thanks to Trump, and she’s completely right. He has destroyed our court system because Democrats did nothing to address the problem when they actually had the power to do something, as Ring of Fire’s Farron Cousins explains.

In case you weren’t paying attention. A little noticed op Ed came out this past weekend from Ronna Romney McDaniel, the chairwoman of the Republican National Committee. Basically Ronna McDaniel runs and oversees the entire Republican party here in the United States and here is what Ms. McDaniel told us in her op Ed. She said, yes. Okay.

Trump has secured the future of the American court system in the op Ed. She goes into detail about how great a job Donald Trump has done with packing our court system with partisan Republican hack. Judges. Read this paragraph to you directly from this op Ed. Here. Under this administration, the number of circuit courts with Democrat appointed majority’s has fallen from nine to seven. Last month, president Trump flipped the third circuit to a Republican appointed majority. He brought the 11th circuit to an even split. The infamously liberal ninth circuit had 18 Democrat appointed judges, seven Republican appointed judges, and for vacant seats at the beginning of president Trump’s term. Today, it has 16 Democrat appointed judges and the Senate will assume, confirm another two of president Trump’s nominees. Once the remaining vacancies are filled, the largest circuit court in America will have an unprecedented 13 republican appointed justices at any point in that one particular paragraph. In fact, you can actually read the op Ed from the link in the description of this video. Does she talk about how these judges help consumers? I she’s only talking in terms of republican versus Democrat. She’s not saying a consumer friendly judge. Okay.

All she cares about is which party put them there because she knows what that means. It’s not going to be a consumer friendly judge. It’s not going to be a judge that cares one bit whatsoever about the civil rights of anyone here in this United States that isn’t a wealthy white man. It’s gonna be a right wing pro corporate republican hack judge because that is the only kind of judge Republicans know how to put out there on these courts and here she is in this op ed doing a victory lap telling us we’re getting rid of Democrat appointed judges and we’re replacing them with Republican appointed judges and he has reshaped the judiciary for 30 40 50 years at least. What’s interesting about this op Ed is that this morning a new op Ed came out a little more in depth than just an op ed by man named Christopher Kang who was the legal nominations lawyer for President Barack Obama.

And in his piece he talks about how horrible the Republicans had been with judges. But then he goes one step for uh, further and he says, Democrats enabled this again, this is actually coming from the guy who oversaw Barack Obama’s judicial nominations. He was part of the process and even he is coming out now willing to say, dude, we screwed up. We tried to play Nice with a party we knew wasn’t going to play Nice. We tried to put in these nonpolitical people, you know, no idea logs, nobody too far to the left, nobody too far to the right. Everybody just right down the middle of the road. And because of that, we helped to destroy the court system. He’s willing to admit it. He does admit it. And I applaud Christopher Kang for admitting it because it’s something that we here at ring of fire, I’ve been talking about for 15 years now in the last week multiple different reports have come out talking about how horrible these Republican appointed judges are and I applaud the organizations who did that. The Alliance for justice people for the American way coming out with these different reports, Ron and McDaniel doing her little victory lap, telling us that we’ve remade the courts in the Republican’s image and we have been telling you this for fifth teen years.

This is why Republicans won’t go against Trump. This is why more Republicans don’t stand up to Trump. They don’t like his methods, but they’re all fighting for the same end and that end is to reshape the judiciary because I as as I’ve said a hundred times over, control of the house comes and goes, control of the Senate comes and goes, control of the White House comes and it goes, but you get a lifetime appointed judge sitting on a bench age 37 as at least one of Trump’s nominees who has been confirmed are then boom, you got that court. Especially if you put three or four on there like Trump has. You got that court for the next 40 years and there’s nothing, nothing that the rise and fall of daily politics can do to change the balance of power on that court. Republicans have always understood that in game and in spite of the fact that we’ve been sitting here for 15 years telling you that this was happening in warning you that it was happening. Okay, we’ve really only seen the last week. We’re suddenly Democrats started to care about the rest of the court system. Can’t be, I guess mad at them for finally chiming in, can be a little annoyed that they weren’t paying attention sooner, but welcome to the fight. We got a lot of catching up to do now.