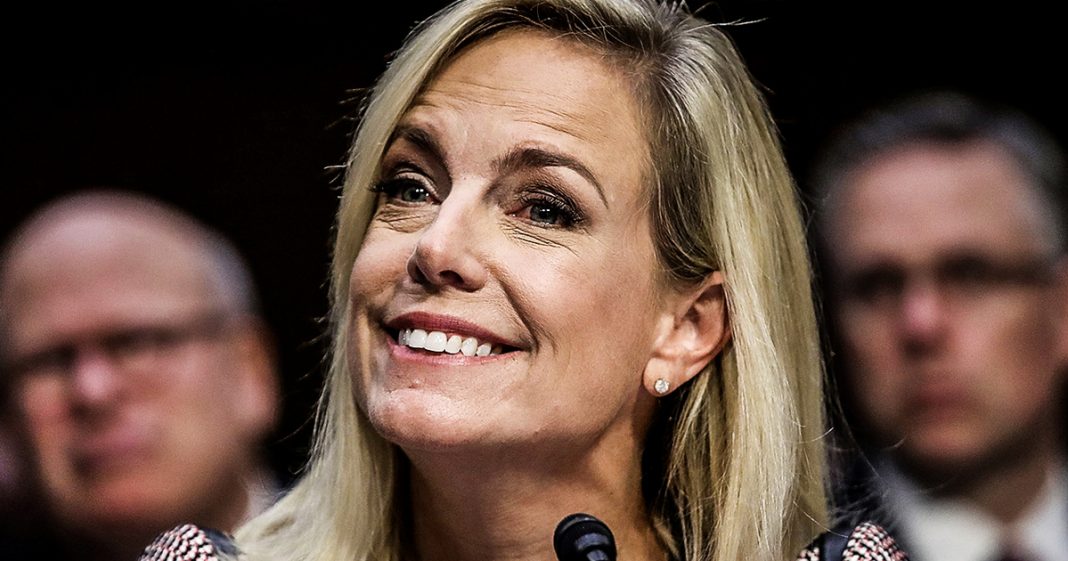 Former Homeland Security chief Kirstjen Nielsen was a horrible person, but apparently she wasn’t horrible enough for Donald Trump. Shortly after her resignation, reports began swirling about how Trump treated Nielsen. He was constantly berating her and asking her to do things that were illegal in order to stop migrants from entering this country. Ring of Fire’s Farron Cousins explains what’s happening.

Yesterday, Homeland Security Secretary, Kirstjen Nielsen announced that she would be resigning from her position effective immediately. And then she immediately said, actually, that’s effective Wednesday of this week. So for the next 48 ish hours, Kirstjen Nielsen is still going to be the secretary of Homeland Security. And then after that, she is out the door. Uh, I think a lot of people agree with me when I say that we will not miss a single thing about her. Now here’s what’s happening in the media right now. You had this big report come out from the New York Times that almost almost felt like it was trying to make her a sympathetic figure. Here’s the big quote, the one that’s been going around, I’m sure you’ve seen it in every story you’ve read about Kirstjen Nielsen within the last few hours in here. It is the President Berated Ms. Nielsen regularly calling her at home early in the mornings to demand that she take action to stop migrants from entering the country, including doing things that were clearly illegal, like blocking all migrants from seeking asylum.

She repeatedly noted the limitations imposed on her department by federal laws, court settlements, and international obligations. So poor Kirstjen Nielsen didn’t want to do these things, at least some of the illegal things that Donald Trump wanted her to do. She didn’t want to be berated. She didn’t want to get phone calls early in the morning. She’s the real victim here, right? We’ll know. Kirstjen Nielsen is a horrible, miserable excuse of a human being who enacted some really horrible policies and then repeatedly lied about it to the American public and even to Congress. So no, I feel no sympathy for Kirstjen Nielsen. You have Republicans out there right now on Twitter saying, oh, she was so, so victimized here. She couldn’t even go out to eat with their family without people coming up to her and telling her she was a horrible person. Well, good. She was a piece of crap. She doesn’t deserve to ever have a meal in peace again.

And so every single child that she struck a snatched from her parents gets reunited and those lives get put back together and those children get the therapy that they’re going to need. So that they can overcome that ridiculously traumatic experience. Uh, yeah. Until then, I don’t care if Kirstjen Nielsen can’t have a meal in peace because she doesn’t deserve to, but I guess the real issue here is that even though she was about as evil as they come, she still wasn’t quite evil enough for Donald Trump. He wanted more. And that’s what’s truly terrifying about this story. Kirstjen Nielsen is not a victim in any way. You work for Trump. You decided to go along with his evil, diabolical plans then yeah, you deserve to get phone calls early in the morning telling you you’re an idiot because, well, if you do that, you’re, you’re an idiot. So I don’t with him on that, what I do disagree with is him come, uh, repeatedly wanting her to break the law that I have a problem with.

And I think everybody should have a problem with that no matter which side of the immigration argument you fall down on. Because we should never want the president to actively want to violate the law. Even if you agree with the policy that he’s trying to violate the law to do that doesn’t make any sense. Folks. This is a man who has no respect for the rule of law. He doesn’t understand what the laws are and that’s going to lead to trouble every single time. Just as we have seen with the immigration issue. That’s why all of his policies end up getting struck down in court, at least with regards to immigration because he’s too stupid to know what he is allowed and is not allowed to do and Kirstjen Nielsen was his biggest enabler. Nobody’s going to miss her. The even oris part though, because there’s always a worst part of these stories, is it Steven Miller is now calling the shots now.

He’s not going to be acting with the homeland security in any way, but according to reports, he is the one that’s behind this purge trying to get rid of all of these non immigration hardliners from the Trump administration and replacing them with people who believe that white people are the only good people on this planet. Kirstjen Nielsen was a horrible human being, deserves whatever the history books are going to write about her. But trust me when I say that this president on the advice of Steven Miller is probably going to put somebody so much worse as her replacement.