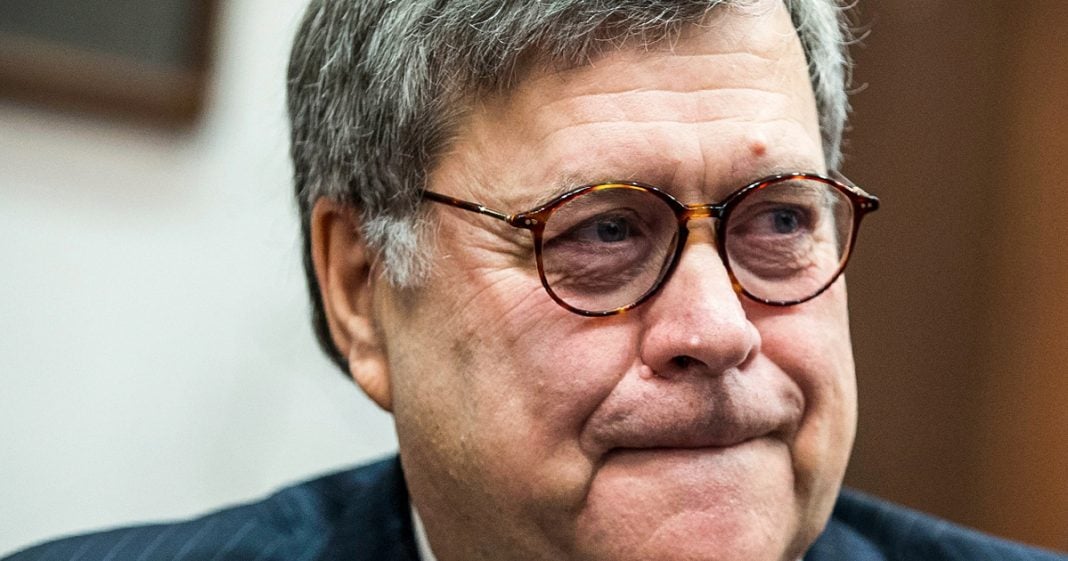 Attorney General William Barr is looking more and more foolish by the day, as members of Robert Mueller’s team are coming forward and saying that the information in the report is not accurately reflected by Barr’s “summary” of it. This isn’t good news for Trump or anyone in his administration, and further proves that the public needs to see the entire, unredacted report in order to move on from this issue. Ring of Fire’s Farron Cousins discusses this.

You know, it really is amazing how much can change in just one little weak, you know what I mean? You think back to last week, you know, two Sundays ago, I guess whatever it was when we had William bars, summary of the Mueller report come out. Well, when that happened and he said there was no evidence of collusion or conspiracy between Trump and the Russian government and I am not going to pursue any charges on obstruction of justice. You had a lot of people including some on the left doing their victory laps. Yes. Hey, and I called it, I told Ya I’m there. Oh, I’m great. All you other people who talked about this or reported on it, you’re stupid idiots. I am the smartest human being in the world and I think we all know the kind of people I’m talking about, right? We get your Greenwald’s and you’ve got your Michael Tracy’s.

They were out there all over the place telling us that everybody else has done. And I’m the smartest person that ever lived. Okay. Well, there were plenty of us who said, you’re never gonna be able to prove collusion at all. And we didn’t feel the need to do that. But nonetheless, they were on their high horse and til of course, last Wednesday when they all got knocked the fuck down. Here’s what happened. You see members of Mueller’s team, you know, the prosecutors, the investigators, uh, they came out and they said, hey bar, kind of got it wrong in his summary report. Oh, but let me actually take you back a few days before that happened, when bar had to come out and tell us all that, my summary Wasn’t actually meant to be a summary. That was kind of just my, my interpretation of, of it. It wasn’t a summary, it’s just kind of how I felt about it.

So I’m sorry if I gave people the wrong impression. So that was actually the first like slow down on your victory lap lesson. And then when molars people came out and said, it actually makes Trump look a lot worse than what Barr said, that that’s actually what they said. They said it makes him look a lot worse and it’s a lot more damaging for the president. Then what bar was leading us to believe. Now, in all fairness, they did not come out and say no. There definitely was collusion. So with them, I believe that too. If that is what they’re telling us, if they’re not going to refute that, I believe they were not able to find the evidence. Let’s move on from that. But they did say that the obstruction of justice part, there was a lot of evidence for it. They essentially told us that they were able to prove it, which means they did find intent because she can’t have obstruction without that intent.

And by telling us they proved it, then they must have shown intent. The bottom line is this, folks, even when that summary came out from Trump’s handpicked the attorney general, that kind of specialized in whitewashing this kind of crap, we should have taken it with a grain of salt and most of his dead. But most of us weren’t saying like some on the establishment side of the Democratic Party who was saying no, it’s a conspiracy. It’s a lie. There is collusion and I am the only one who has proof of it but I’m not going to show you my proof. That was the other extreme that was like, dude, calm down. But then all the people doing the victory laps on both the left and right. That was a little obnoxious as well, especially because none of these people saw the damn report and that’s what most of us sensible folks have just been screaming since day one.

Just show us the unredacted report and then we can make up our own minds. Actually we don’t have to make up our minds cause the report in its final form. As long as it’s unredacted, we’ll make up our minds for us, if we choose to believe something else, then we’re choosing to believe something that is not reality. But at this point, everybody needs to calm the hell down and shut the hell up because until we see the report, there are no victory laps. There are no conspiracies because we don’t know what’s going on. But the one thing we do know from the people who worked on the report is that apparently what’s in those 400 pages is a heck of a lot more damaging to president Trump than what bar released in is four pages.