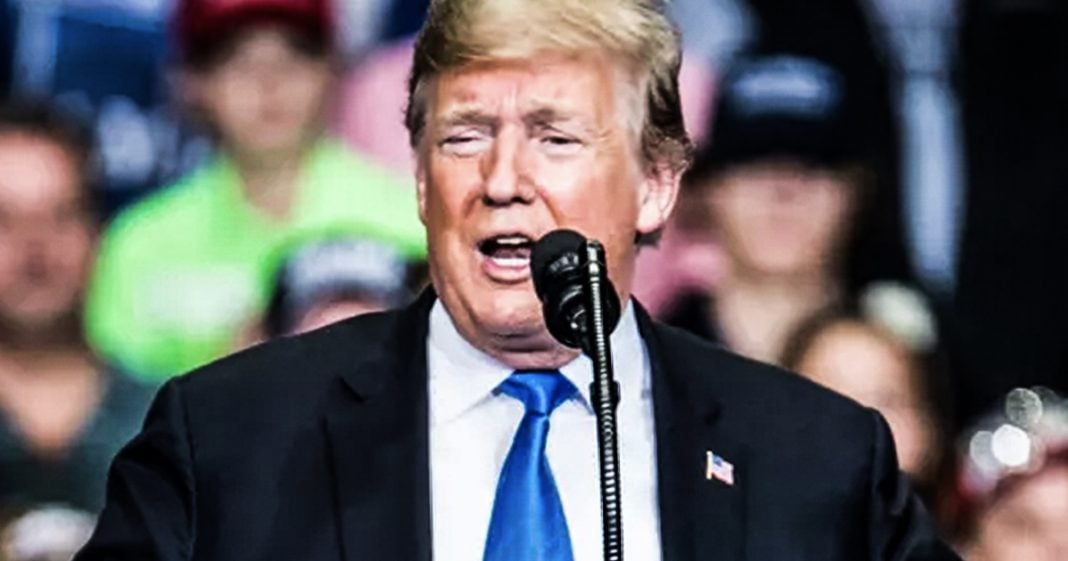 According to the latest polling data, Donald Trump’s repeated attacks on the press have made quite an impression on the American public. The majority of people in this country, including a super majority of Republicans, believe that the major cable news outlets and newspapers are publishing fake stories with the sole intention of hurting Trump. This is a false belief, but it is one that Trump has spent more than 2 years cultivating. Ring of Fire’s Farron Cousins explains what this could mean for the 2020 elections.

Well, some of the latest polling data out there has some really good news and some really, really bad news for the 2020 elections. Let’s start with the bad news. The bad news is that a majority of people in this country, 57%, according to the new poll, say that media outlets, the corporate media outlets, the left leaning media outlets, which for some reason actually includes Wall Street Journal, which is owned by Rupert Murdoch. Nonetheless, 57% of the public believes that these news outlets actually report false stories about Donald Trump for the sole purpose of making him look bad. More than half the country believes that these news outlets are reporting, quote, fake news just to hurt Donald Trump. Now the number of Republicans who think that is through the roof, almost 90% of Republicans think that media outlets are reporting fake stories to hurt the president. Uh, less than 30% of Democrats think the same thing, but the pole gets even worse from there.

Cause we’ve known Donald Trump’s attacks on the media, we’re going to be a thing that Republicans tried to run on. We know that because the RNC actually told us that a year ago. That’s what they were running on. Then the midterms didn’t work well for them then, but now things are starting to change. The public is starting to buy into Trump’s lies that any negative media on him is just fake news and that’s very disappointing. The corporate media socks, don’t get me wrong, I hate them. I do not watch them ever, but I hate them for a different reason.

I hate them because they’re corporate owned entities who don’t focus on the issues and who Barry important stories because they’re corporate sponsors won’t let them talk about that stuff. Trump hates them because they report the truth about him, which pretty much 99% of the time happens to be negative because he’s a very negative, horrible human being. Now on to more bad news from the pole. Um, 71% of Republicans think that the views held by Democrats threatened the wellbeing of the country. 71% of Republicans think democratic views and ideas hurt the wellbeing of the United States. That is a massive hurdle that has to be overcome. But it’s also a hurdle that kind of tells us what direction we need to go in in terms of media outlets. It has been a lot of talk recently, a Twitter between, you know, some progressive hosts, some arguing, some openly just questioning, you know, should I, should I interview these right wing people? Is that going to do anything? And I think this poll helps to give us an answer. No, it’s not. When you have 71% of a political that says, your ideas hurt this country, okay, what’s the point?

You can read some of them, but by talking to a Ben Shapiro or a Charlie Kirk or an Alex show, you’re not going to change those guys’ minds because they get paid to say the stupid things. They get paid to say the crazy. So there’s no point in trying to convince them because they’re not going to suddenly have an epiphany and say, you know what, the millions of dollars I get from the Koch brothers are not enough to make me want to tackle climate change. Yeah. What I, I’m a climate change fighter now go away with your millions. Now they’re not going to buy into it. They’re going to go out there, spread lies to their audience. Their audience isn’t gonna question it because they’re already just tuned into that. They’re not listening to the other side. So what’s the point? More bad news. That number of 71% who think that democratic policies are bad.

Back in 2014 it was only 36% only 36% of Republicans thought Democrats hurt the wellbeing of the United States. What happened? Well, you’re Fox News has happened. You’re Shapiro’s. You can to Owens, she, Charlie, Kirk’s, those folks started becoming a thing. You’re Tomi Lahren. It’s almost impossible to fight that massive megaphone that they have that is funded by billions of dollars when all we’ve got are some podcasts and youtube channels, right? Kind of hard to fight back against that. But here’s the catch, and this is why I may be wrong about trying to talk to those Republicans. This poll also found that independence are abandoning Republicans. They’re abandoning Donald Trump. That’s the good news out of this pole, okay?

They’re breaking for Democrats. Independents see what’s happening with the Republican Party. They see the policies, they hear the noise machine, and it doesn’t work on them. Either that or they’re not tuning into the noise machine. And so they’re still able and capable of forming their own intelligent opinions and those intelligent opinions more and more are leading them to the Democratic Party. So there is hope, but expect more attacks on the media from Donald Trump. Expect more claims of fake news and expect him to be saying this more and more frequently as we get closer to the 2020 election because he knows that out of all his policies, attacking the media appears to be the only thing that works for him.