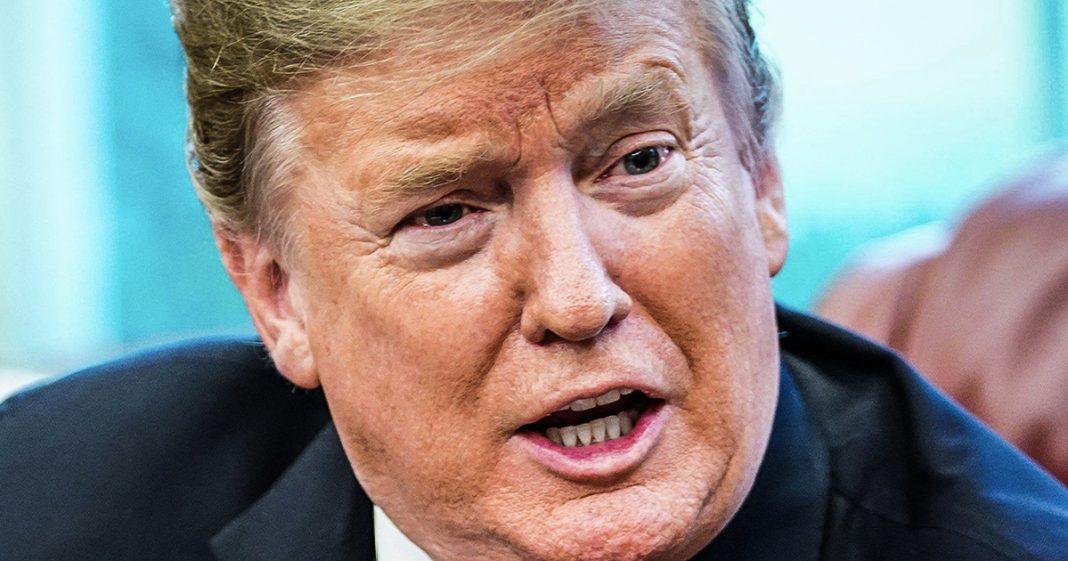 Donald Trump has not had a good week. And neither has the American public. But Trump’s so-called “gaffes” of the past week reveal so much more than just a confused old man. They reveal that whatever is wrong with him mentally is definitely getting worse, and the public needs to start demanding that members of Congress take this seriously. We have mechanisms in place to put an end to this, but Republicans currently control all of those mechanisms. Ring of Fire’s Farron Cousins explains why Republicans refuse to act as Trump gets crazier.

Something has to be done about the fact that Donald Trump’s mental state continues to decline. Now, I don’t know about you, but ever since earlier in this week with Donald Trump said that noise from wind mills causes cancer. I haven’t been able to get over that and forget the fact that all in the same day the man couldn’t say the word origins. He kept saying oranges. He kept getting confused about where his own father was born. Lying to was telling. It was in Germany when actually it was in New York. We actually have the birth certificate. We know where the dude was born and yet he’s lying about it, but no, to me it was the windmill thing. Right. When mill noise gives you cancer is what the president said the next day. Mercedes slap from the White House Communications Department refuse to say whether or not that was true. She’s like, I can’t answer that. I don’t know.

No, you idiot. We do. No, it doesn’t cause cancer. Stop trying to cover for the fact that your boss is clearly suffering from a mental illness. This is going to be one of those things that I’m not going to get over. And here’s why. First and foremost, this actually is a conspiracy pushed by the same people who pushed the Kim trail crap telling us that windmills cost catch and they give you the headaches and all. It’s, it’s messing with your brain’s man. It’s the windmills. No, that doesn’t, that doesn’t happen. You, you need to seek help or you please seriously go, go talk to somebody. That’s not a normal way of thinking and it’s harmless enough when it’s an average American citizen out there pushing one of these conspiracies. It’s a different thing altogether. When hits the most powerful human being on the planet, the president of the United States. See, here’s the thing here. Donald Trump has the sole authority and access to launch a nuclear strike anywhere on the world, on anyone at any given time for no particular reason whatsoever. That’s how our nuclear rules work. No oversight, no chain of command, just him saying do it and then it’s done.

And this is a man who, honest to God, believes that climate change is a hoax perpetrated by the Chinese. Doesn’t know where his own father was born or at least can’t remember that thinks that windmills give you cancer. He is actually also pushed the vaccines cause autism thing. Okay? He is denying basic reality. He is denying science. Something has to be done. This isn’t funny anymore. It never was funny, but we have mechanisms in place for for something like this, we are watching this man’s brain deteriorate before our eyes every single day. Every day.

It kind of like a really weird payday loan thing, but he wouldn’t be able to get that title back. Like most payday loans. Actually, he would not be able to prove that he is mentally competent because he’s not, and I don’t say that to be mean. I don’t say that to be offensive. I don’t say that just because I hate the man. I say it because it’s obvious when you look at this man, when you listen to him speak, when you hear him say oranges instead of origins, when you go back and watch the other interviews where he just randomly start slurring ms verge and you can make how we chair folks, those are symptoms. Those are symptoms. Neurologists, psychologists, psychiatrist, they’ve been telling us this for two years. How long do we keep ignoring them? How long do we keep ignoring the symptoms that are getting worse? This man is a threat. This man is a danger and it’s all because his brain is not functioning properly. He could be getting help, he could be getting treatment, but the rest of the country wants to sit back and act like this isn’t the biggest problem this country has ever faced. But I promise you, at least in most of our lifetimes, it truly is.