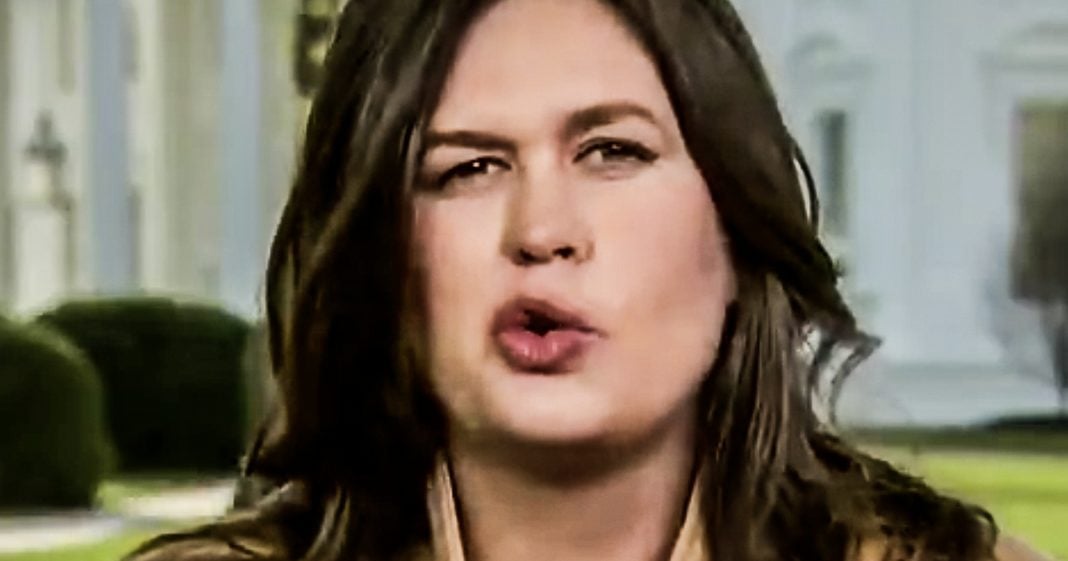 This past week on Fox & Friends, serial liar Sarah Huckabee Sanders said that the Democratic Party is a “sad excuse for a political party” and that they routinely get beaten by Donald Trump “day in and day out.” Really? The Democrats have their problems, sure, but the Republicans and especially Trump are the ones who are struggling right now because they have no idea how to govern. Ring of Fire’s Farron Cousins provides Huckabee Sanders with a lesson on which Party is really “sad.”

Earlier this week, White House Press Secretary Sarah Huckabee Sanders appeared on Fox & Friends, I guess as part of the ongoing victory lap after the William Barr memo attempted to clear president Trump, even though now we know that members of Mueller’s team say, yeah, that’s not at all what happened? Nonetheless, Sarah Huckabee Sanders went on Fox & Friends on Thursday, do a little bit more of a victory lap and then talk about how pathetic and horrible Democrats really are. I don’t want to make you have to watch it, so instead I’m just going to read you what Sarah Huckabee Sanders said. She said that Democrats are sad excuse for a political party, a sad excuse for a political party. Now, if you ask me, I would think a sad excuse for a political party would be a party that for the last 10 years has told us that the Democrats suck on healthcare and they’re going to give us something better.

And then when they have the chance to give us something better, we realized they never bothered to come up with a plan. I’d say that’s pretty sad and pathetic, wouldn’t you? If you talk about wanting to do something for 10 years and then you get the chance to do it and you haven’t even started the planning phases, that’s the sign of a party that doesn’t know what the hell they’re doing. But good try Sarah. Good try and it gets worse. She goes on to talk more nonsense as this serial liar is known to do and here it is. At some point they have to realize that they have been beat by President Trump and the 2016 election. They’re getting beat by him day in and day out on issues that actually matter. And I think there are a sad excuse for a political party right now and at some point they have to decide that they want to actually govern and they actually want to change things and make America better and join the president in those efforts.

Sarah, what world do you live in? In what world is that man in the Oval Office beating the Democrats every day? Was it was it, was it when he shut down the government because they wouldn’t give him what he wanted and then he reopened the government because he still didn’t get what he wanted and he realized how much he screwed up it. Or are they, what are you talking about? They’re not beating him day in and day out. They continue to refuse to go along with the horrible plans that he has. So he had to declare a national emergency that most people in this country think is utter nonsense. He’s still pushing for a wall that most people in this country think is utter nonsense. He’s now threatening to impose a 25% tariff on literally everything that Mexico sends to the United States, which would absolutely devastate and cripple the United States economy.

And he’s doing it because he’s not winning. That’s the bottom line here, Sarah. Those tariffs on China that have decimated farming communities in the United States, that’s not winning. He did it because he’s losing, and I don’t know if you notice this, Sarah, but we actually, uh, what was it, November, I think it was. We had some elections where Republicans got their butts handed to them by Democrats. Not just any democrats, but those far left Democrats that Republicans love to attack. And they are in Congress right now kicking. But coming up with plans and policies and proposals and ideas that your Republican party continues to shoot down. The Democrats today are better than they have been at than at any other point in my lifetime. And they’re not getting beat every day. That’s your guy. Your desperate, disgusting, despicable boss is the one who’s been backed into a corner by Democrats and the American public. And I wouldn’t exactly call that winning.