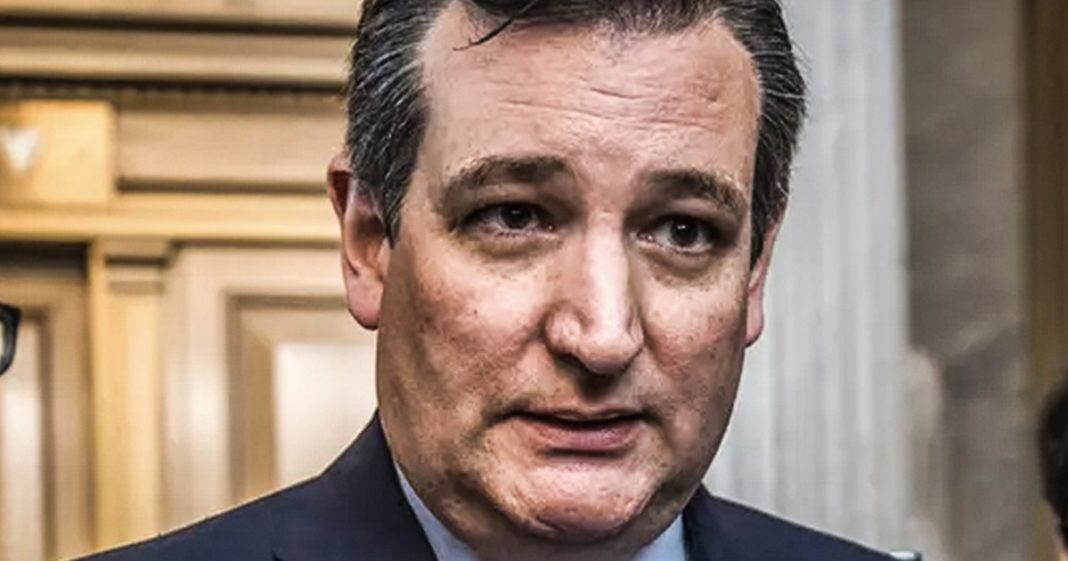 Ted Cruz may have won the right to keep his Senate seat in 2018, but he’s not done fighting that election. Cruz is now suing the Federal Elections Commission because he wants all of his personal money that he spent on the campaign back. This isn’t a suit that Cruz is likely to win, and it shows just how petty and desperate this man was to win this race. If he wanted his money to stay in his pocket, he should have left it there, as Ring of Fire’s Farron Cousins explains.

Republican Senator Ted Cruz is angry. Ted Cruz wants his money back. Ted Cruz is suing the federal elections commission because he wants all the money back that he loaned to is 2018 senate campaign where he barely defeated Democrat Beto O’Rourke. See Ted Cruz when he was in his Senate reelection there, he loaned the campaign $260,000 but you’re only allowed to get reimbursed by your campaign. $250,000 so Ted Cruz, after reimbursing himself, the first quarter of a million is now short $10,000 and he’s not happy. And so he’s suing the FEC because he wants that $10,000 back. That’s his money and he wants it. Now, here’s what’s happened. Ted Cruz is arguing in court that not giving him his $10,000 back because that would exceed the legal limit on reimbursements. They’re therefore limiting his free speech because he argues in the case you’ve already determined American court system. That money is speech.

And by not giving me back all of my money, I don’t have your limiting my freedom of speech. Look, nobody ever said Ted Cruz was a good lawyer. Okay, but here’s the thing, Ted, part of your argument is correct. Our court system is screwed up enough to where they do think and they ruled that money is freedom of speech spending. Money is freedom of speech. Show me in any of those decisions where it says that reimbursing money is freedom of speech cause see, I think that’s where you’re going to run into a bit of a problem. You were allowed to speak freely and spend freely and do whatever the hell you wanted with your money, with your campaign money and hell you even one. But apparently you’re still bitter about that. So yeah, you had all the free speech you could ever want, but nowhere in any of those laws does it say that freedom of speech also includes getting all your money back when you decided to loan money to your campaign.

Sorry Ted, maybe don’t invest in that crap anymore. Or maybe if you know you can only get reimbursed a quarter of $1 million, only give a quarter of $1 million. I’d seriously, dude, you had enough money to where you were able to loan them a quarter of $1 million. You got the quarter of a million dollars back and now you’re haggling over the additional 10,000 piss right? The hell off bud? Okay, this is first world. 1% are problems all over here. Nobody cares. Nobody cares if you get your $10,000 back. I would have loved it if he got $0 million back, but to sit here and tie up the court system with your stupid lawsuit, that doesn’t even make sense based on the argument that you and your lawyers are using in court is absolutely disgraceful you. We’re not limited in your freedom of speech, but the courts are going to tell you, even the most ardent rightwing judge out there that you have zero right to get your money back after you’ve spent it.

If you didn’t want to put it into the campaign, you didn’t have to Ted, you made that decision and apparently it was a bad decision on your part, but all of this also underscores the bigger point. We’ve got these one percenters. We got one sitting in the Oval Office right now. Well, technically right now he’s probably on the golf course, but nonetheless, these rich people think they can just do whatever the hell they want. Sure. I need the loan hundreds of thousands of dollars to my own campaign because I’m losing share. I’ll do that. They’ll pay me back. Meanwhile, the average working class people trying to run a campaign, you’re Randy Bryce’s, who unfortunately did not win, but would’ve been amazing. Your AOC, people like that. They got to go out and they got to raise money from the grass roots level. Ted Cruz can make a couple phone calls either to big Republican donors or apparently to his own bank and get the money that he needs for his campaign, and if you don’t see a problem with that, then I don’t know how to reach you only to say you’re also part of the problem.