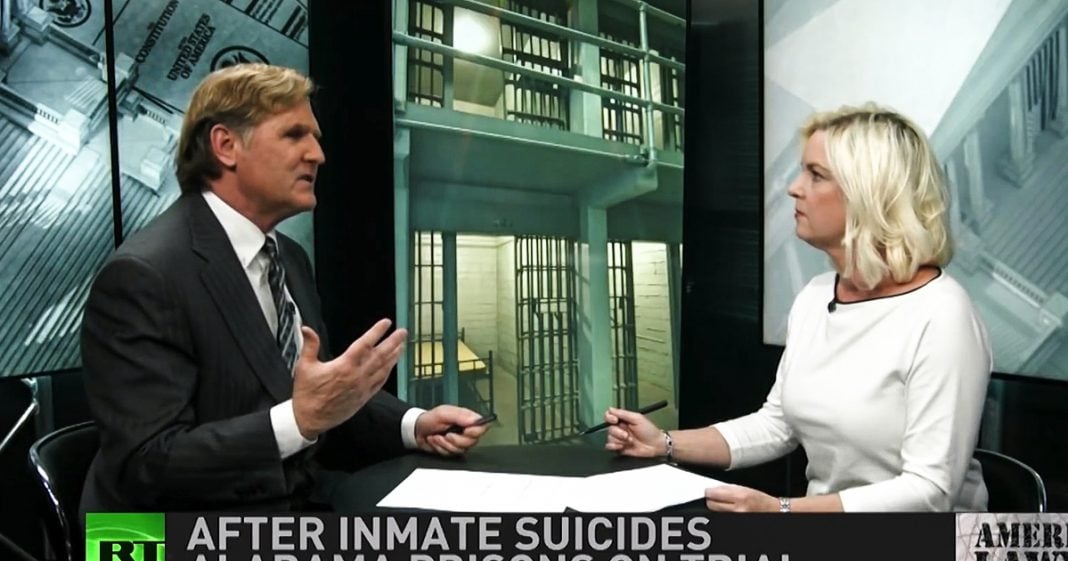 Via America’s Lawyer: Mollye Barrows, Legal journalist with the Trial Lawyer Magazine, joins Mike Papantonio to talk about how a federal judge will weigh whether the Alabama prison system is doing enough to prevent suicides after 15 inmates killed themselves within 15 months.

Mike Papantonio:             A federal judge who once ruled that the Alabama prison system has “tremendously inadequate mental healthcare,” is now going to decide if the states doing enough to prevent inmates suicides.

Mollye Barrows:                Well, this is actually an ongoing problem for some time. This suit was brought by the Southern Poverty Law Center. I always get, have to look down over that one, Southern Poverty Law Center. So they brought this several years ago. They’ve amended it because of this recent spike in suicides. 15 inmates have killed themselves in 15 months. Attorneys for these inmates are saying that this is unacceptable, that there are basically a number of reasons that these inmates are committing suicide that can be impacted by the correction system that they, majority of these are happening.

In fact, the Southern Poverty Law Center says that Alabama has the highest number of suicides within the prison system and a good number of them are happening when they’re in solitary confinement. So that’s essentially what this lawsuit is about. This same judge that heard similar allegations in a, a similar suit a couple of years ago and said that healthcare being provided through the correction system was horrendous and a problem, is now hearing this same case where the protocol of determining basically, is Alabama doing enough to prevent these suicides? What prevention measures do they have in place? What needs to be changed? What can be changed?

Mike Papantonio:             Okay, so look, look, part of this story as we go forward, we’re going to find that the privates, the private prison industry is…

Mike Papantonio:             Okay. Okay, so what is the response from Alabama prison officials? How do they say, yeah, yeah, yeah, we had 15 suicides, but yeah, these are people in prison. Things happen. What, what’s the response? Cause I remember the last time this came up.

Mike Papantonio:             There was a similar kind of problem. Alabama says, you know, it’s just endemic in the system that if you look all over the country, everybody has these problems and everybody doesn’t have these problems.

Mollye Barrows:                That’s exactly right. Well they’re trying to say, hey, these inmates aren’t dying because we don’t care. We do care. We just need to tighten up our measures and our protocol and makes some changes and we do want to do a better job of effectively identifying potential suicidal inmates and we’re gonna make some changes. So they’ve come up with their own plan and response that basically says we really do have a heart. We do care about the safety of our inmates. We’re not going to send them straight from mental health observation to solitary confinement. We’ll stop that practice.

So that’s what is coming out in this hearing this week is that all this testimony, especially from attorneys that represented clients who did commit suicide, telling these horror stories of how essentially there were plenty of warning signs and corrections officers within the system. We’re not doing anything about it. So they’re saying, you know, at the very least hold your people accountable when they’re not even following basic procedures when it comes to following mental health rules.

Mike Papantonio:             They’ve got issues. They’re thrown into this in solitary confinement. There’s really no effort to help them make it through the drug addiction problem. So it’s like throwing gasoline on a fire and all of a sudden they’re committing suicide. There, there’s ways to deal with this. The point is there are other prison systems all over the country that have those same problems, but they have stop gaps in between.

They say, okay, this person’s coming in for, you know, a lifetime heroin addiction. How do we deal with that? What do we do? And they just make it at least reasonably humane to where they can make it through the system. They don’t throw them in, in a solitary confinement and say, well, bad things happen to prisoners. What’s the, what’s the judge’s reaction so far to this process?

Mollye Barrows:                Well, you know, it does give me a little bit of hope. This is federal judge Myron Thompson. Like I said, he heard this similar allegations a couple of years ago and he’s saying, all righty, well this sure sounds a lot like what I’ve already heard and seems to be wanting to perhaps go down the path of some sort of accountability where we see some real changes because they were already supposed to be implementing some of these changes.

And yet based on the fact that you have a wave of suicides, another spike, 15 in 15 months, he’s saying this sure sounds similar to the last time we heard these allegations. In fact, when they addressed them two years ago, an inmate who testified during that trial later committed him, committed suicide after he testified. So this judge is saying, look, you know, how many times do we have to get people on the stand saying you’ve got problems and yet the same thing keeps coming up. So yeah,

Mollye Barrows:                And you’re right, it boils down to we need reform. Reentry reform, identifying them when they’re in there, giving them the proper skills and tools to deal with it and not building more prisons.

Mike Papantonio:             Thank you for joining me. We’ll by the way, next week we’re going to be talking about private prison systems. This is a big story there. Okay.