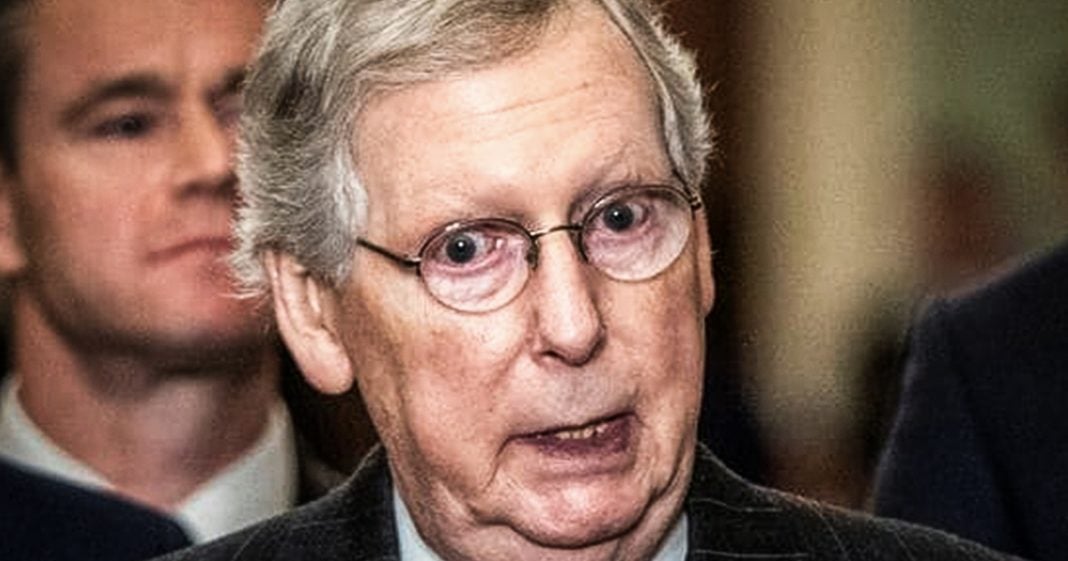 New polling data compiled by the New York Times has Republican pollsters in full panic mode. The data shows that young Americans are disavowing the Republican Party in record numbers, not exactly the kind of thing needed to sustain a political party. As the older generation of Republican voters move to the great beyond, there won’t be enough people left to keep the Republican Party afloat. Ring of Fire’s Farron Cousins discusses this.

Republican pollsters started freaking out earlier this week after new data analyzed by the New York Times was really showing that young voters are absolutely abandoning the Republican Party. The gap between the current 18 to 24 year old and 18 to 29 year olds in party identification has never been more stark than it is right now. Right now of that age group, you have 60% who call themselves democrats. 60% of that 18 to 29 age group says, I am a democrat. 33% say I’m a Republican. Okay, 60 to 33 a 27 point gap, and that’s why Republican pollsters and analysts and strategists are kind of freaking out right now because they know that the Republican Party’s biggest demographic happens to be the people who already have one foot in the grave right now. That also happens to be Fox News biggest audience and it’s not sustainable. You know when you have a party or a TV network like Fox that is 100% dependent on people who know that they’ve only got a few years left on this planet, that’s not exactly a good indicator for the longevity of your party. Now I know it’s been a very long time in this country since we’ve had real viable third parties or since we’ve had one of the major parties kind of disintegrate and then a new one pop up. It’s been well over a hundred years, but it’s happened. It’s happened many times in US history.

And it could certainly happen again, especially given what we see about the Republican Party today. And here’s the thing, the political scientists who looked at these numbers and said, yes, the Republicans have a big problem and that’s what freaked out the strategists. But they looked at this and they said, here’s the thing. Events that happen, uh, between the ages of 14 and 24 are three times more likely to affect your future political beliefs than any single event that happens over the age of 40. So what are these 14 to 24 year olds all have in common? How, what are the 18 to 29 year olds all have in common? Well, they’ve only lived through two republican presidents being one or one and a half the last a year and a half of George h w Bush’s term doesn’t really count. They don’t remember it.

So the two presidents that they were conscious for, George W. Bush and Donald Trump on the republican side, not exactly a, you know, huge glimmer of hope for the future of the Republican Party. But that is what an entire generation in this country knows. There is an entire generation in this country who from experience only knows Republicans as parties of endless war parties of lies, parties of tax cuts for the wealthy elite parties that don’t give a damn about the middleclass parties of devastating economic policies, parties that don’t know what the hell they’re doing. That has a massive impact on those voters. And as the political scientist point out, those views are going to carry over with those people for the rest of their lives.

Yeah, there’ll be some fluctuations here and there, but the damage being done to the Republican Party today by Donald Trump, that’s unlikely to be undone among this age age group. The damage George W. Bush did isn’t going to be undone, and that’s why Republicans are freaking out. They don’t know how to overcome this. They don’t know if they can overcome this, and in all likelihood, they won’t be able to overcome this. So if their fears are correct, we might just might actually be only one generation away from some decent government here in the United States. Once this entire age group gets active, start voting consistently, and let’s their voices be heard from their hometown all the way to Washington DC, that is dramatically going to change the political system here in the United States.