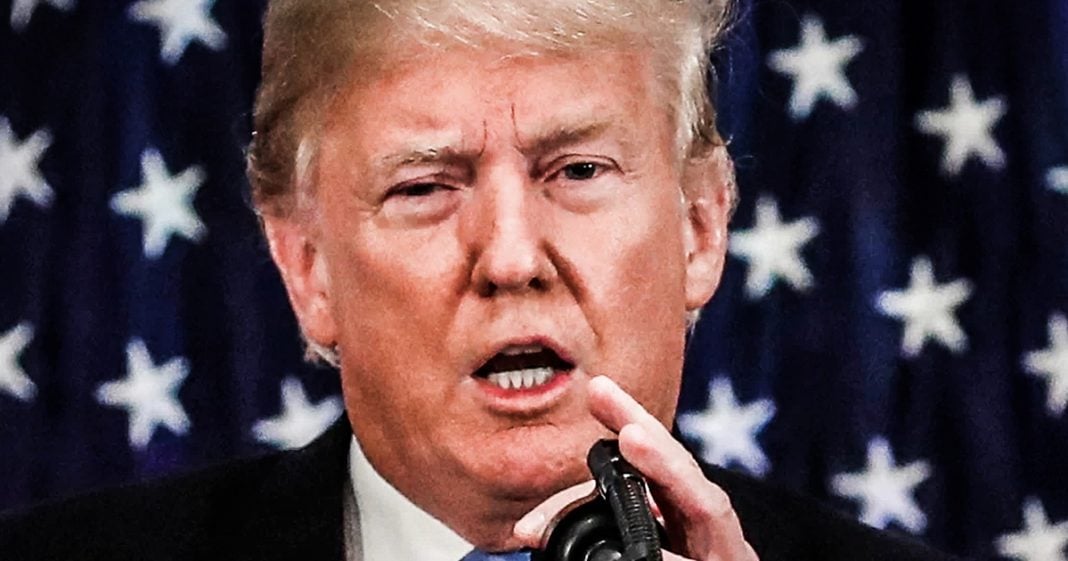 It is no secret that Donald Trump likes to cheat. He’s cheated on all his wives, he cheated at business, he cheats on his medical records, and now according to a new book, he is also the world’s biggest cheater at golf. Through interviews with caddies and even celebrities, the author of this new book was able to paint a picture of a man who will do anything to win, even if it is unethical, and that says a lot about what kind of human being Donald Trump really is. Ring of Fire’s Farron Cousins discusses this.

It’s no secret that Donald Trump is a cheater. I mean, he’s cheated on every wife he’s ever had. His father helped him cheat to get him out of the Vietnam War. He’s cheated in his businesses, possibly cheated on his taxes. He cheated to get loans from banks.

So it’s really no surprise that a new book that’s coming out says that Donald Trump is in fact the world’s biggest cheat at his favorite pastime. Golf, the new book commander and cheat how golf explains Trump by Rick Riley, who, uh, used to be a sports illustrated column. Miss, now he’s a author here. Riley is actually golfed with Donald Trump and he witnessed this firsthand. And then Riley also spoke to many other people who have golfed with Donald Trump, and they all described similar scenarios of Trump cheating. One of those people happens to be Samuel L. Jackson it Samuel Jackson. Here’s what he’s said. He says, we clearly saw him hook a ball into a lake at Trump national in Bedminster, New Jersey. And His caddy told him he found it not in the water though.

Same thing happened with Oscar de la Jolla with Alice Cooper and with LG, a LPGA player, Suzann Pettersen. They all said the same thing. Trump would hit a ball, it would either go into a bunker, going to water, caddy would run ahead and they’ll come out and suddenly they’d all make their way down there and all the balls in the middle of the fairway. Wow. We thought we heard and saw splash, but I guess not. So according to these people, all of these people, Trump would have his caddy go and move the ball to a more desirable spot or just drop a new ball. There’s another story of Donald Trump hit the ball. It went into the water, but he turned around, nobody was looking, so we just put another ball down as if he hadn’t hit it yet. Hits that one and it also went into the water because apparently Donald Trump has a really crappy golfer even though he loves the game and there’s nothing wrong with that.

What’s wrong is that you’re a dirty cheater. There’s also another story where Trump was golfing with a Mike Tirico. It was a former ESPN football announcer to ricoh hits, a beautiful shot right down there, 10 feet from the hole Trumps caddy in Trump, make their way down there. And according to the caddy, Donald Trump picked up the ball and threw it in a bunker. So instead of being about 10 feet away, he’s now 50 feet away and in a sand trap. That’s the kind of cheater that Donald Trump is. So why is this story matter? Donald Trump cheats at golf because Donald Trump cheats at everything. It’s a pattern of behavior that he has been using essentially his entire life. That’s troubling. This is very troublesome. This is the kind of thing that might seem silly on the surface, but the implications of this are huge. There is nothing Donald Trump won’t do to win. There is nothing Donald Trump won’t do to show that he is better even when he is clearly not. Doesn’t that sound like the kind of thing we wouldn’t want in a sitting president? Don’t those kinds of sound like the characteristics you want to avoid in somebody who has access to the most powerful country on the planet. And yet here we are sitting here today with one of the biggest cheaters in American history sitting in the Oval Office. That’s a pretty scary thought, and it also, based on his history of cheating, kind of makes you wonder how we even got there in the first place.