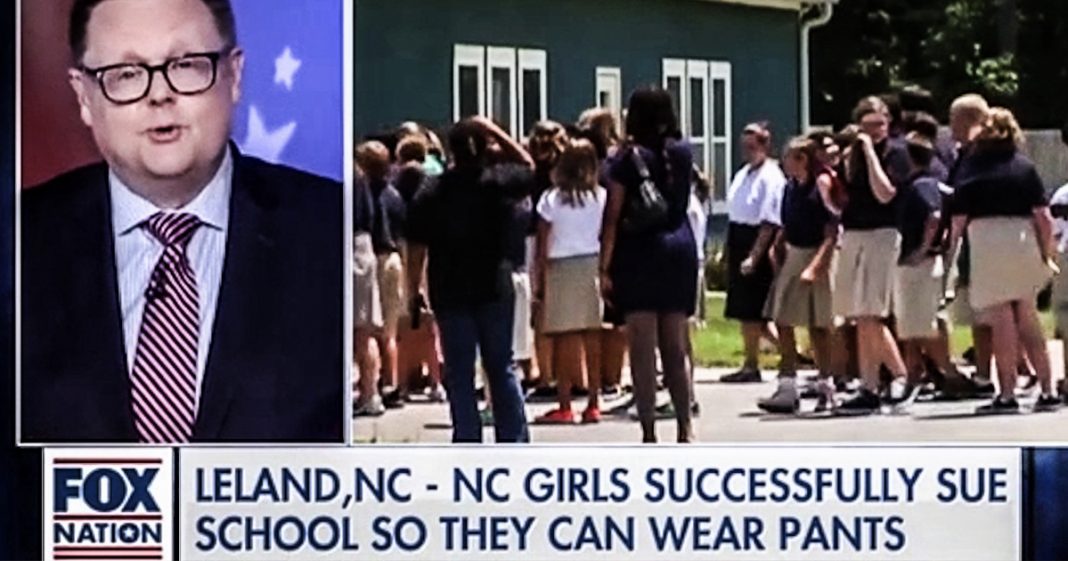 Fox Nation host Todd Starnes is not happy with a recent court ruling that says that elementary school girls can now wear pants to school instead of skirts. Why does this creeper care so much about what little girls are wearing to school? That doesn’t seem like something that a middle aged man should be worrying about, but Starnes believes that now we’re on a slippery slope of boys wearing skirts because that’s how his demented brain apparently works. Ring of Fire’s Farron Cousins discusses this.

When you think of stupid at Fox News, probably one of the first names it’s going to pop in your head as a Tucker Carlson or a Laura Ingraham or Sean Hannity or a Jeanine Pirro. Most people don’t typically think of Todd Starnes because let’s face it, Todd Starnes isn’t the guy that most people know about, but Todd Starnes has his own unique variety of stupid that was on full display earlier this week when he got mad about a court decision saying little girls in school can wear pants. Take a look.

A federal judge says it’s unconstitutional. Oh, force girls to wear skirts to school charter day school, and Lila North Carolina has a dress code. Little boys wear pants. Little girls wear skirts. The school takes pride in its traditional approach to education. It’s a throwback to ideas like chivalry and respect, but some little girls took issue with the dress code arguing they could not do cartwheels on the playground or sit criss cross applesauce and the classroom. The American Civil Liberties Union filed suit on behalf of several girls back in 2016 they claimed the skirt rule amounted to sex discrimination. Now, federal judge Malcolm Howard agreed. He says, the dress code clearly treats girls differently from boys, and as a result, they suffer a burden. The little boys do not. So here’s what I want to know. If the girls get to wear pants, does that mean the little boys now get to wear skirts? I mean, fair is fair.

Now for a little bit more context, he was referring to a court ruling that really only affected this one charter school in Leland, North Carolina. You know, the girls wore skirts, the boys wear pants, everybody’s happy according to Todd Starnes. And then you’ve got these damn trouble maker girls who don’t want to wear their skirts because they can’t do cartwheels or sit criss cross apple sauce as he says. My big question is, why is Todd Starnes so obsessed with what little elementary school girls are wearing? Doesn’t that seem a little creepy? Doesn’t that seem like something you don’t want a older man talking about? Like, Damn. Why can’t these little girls wear skirts anymore? It’s infuriating now. I guess the little boy has got to wear skirts now. What does it matter to you? Why are you obsessed with this? Why did you devote any of your program to talking about this? Girls can wear pants, but it’s okay. If that bothers you, then you need to go seek out a psychologist and find out why you are so obsessed with this because I think most people, even a lot of conservatives in this country, probably wouldn’t care as much as you do. I think you’ve got some demons kicking around inside your head, buddy, and I don’t think you should be talking about them on the air. I think you should be talking about them in private with a skilled mental health professional.