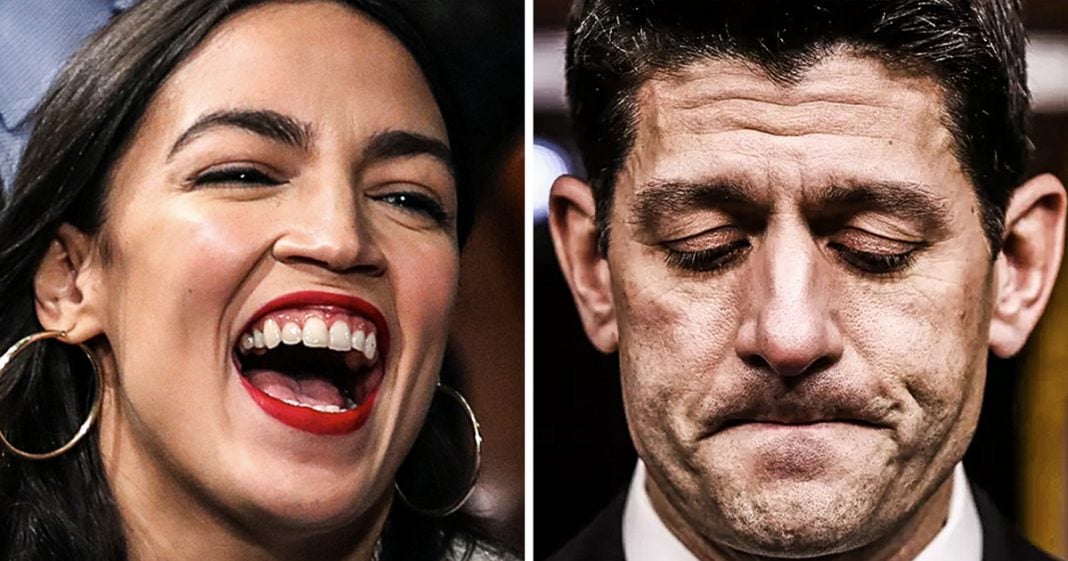 During a speech earlier this week, Paul Ryan says that he met with Alexandria Ocasio-Cortez shortly after her election and said that he gave her some advice. Unfortunately, according to Ryan, she didn’t listen to any of it. And why should she? Ryan was a pathetically incompetent Speaker of the House who blew up the deficit with his Ayn Rand policies that hurt American workers. Ring of Fire’s Farron Cousins explains why nobody should listen to what Paul Ryan has to say.

Earlier this week, former Republican speaker of the house, Paul Ryan gave a speech at a little, a dinner, uh, event where he talked about the fact that Alexandria Ocasio-Cortez did not listen to any of the advice that he gave her. Here is exactly what Ryan told the crowd there. He said, I talked to her AOC. Everybody calls her AOC and he’s starting to sound like Trump here. She’s the youngest person now there I gave her just a few little tips on how just being a good member of Congress knew. I don’t think she really listened to a thing. I said, take it easy. Just watch things for a while. Don’t ruffle any, see how it works. First, listen, uh, Paul, why would she listen to you? You blew up the deficit with your Ein ran policies that screw over American workers in anybody, not in the top 1%. You gave a massive tax break to the wealthy elite that included a full ride off of any private jet they want to purchase. Okay? You’ve been a suck up a sick, offend a tea partier and all around disgusting human being.

Forget the fact that AOC didn’t listen to you. Why would any of us listen to you? You have contributed nothing of value to Congress throughout your entire career. You were a failed vice presidential candidate. So what the hell do you have to offer that she would find a value. She represents a new movement coming into Congress. She doesn’t need an idiot like you telling her, hey sweetheart, why don’t you just go sit down for a while? Don’t ruffle any feathers. You know, just look and see and watch how things are done. No, it’s not what she was elected to do. That’s not why people rallied behind her. They wanted her because of what exactly she has done since they voted for her, which is help expose how corrupt crap is in Washington DC, which she has done. Uh, one of the most specific times was when she said that they made us sit through orientation with lobbyists. What the hell is that? She is the driving force along with the sunrise movement behind the green new deal. She’s the one who took their vision and brought it to Congress and forced it. She just yesterday. Okay.

Was on the house for talking about forced arbitration and how that screws over consumers. Any Republican who says she’s not very bright, obviously isn’t paying attention because she is talking about issues that I have only seen discussed, honest to God on our show. Okay.

I don’t see other progressive shows out there really hammering on the fact of forced arbitration. But you go through our youtube channel, I guarantee you’re going to find at least half a dozen videos on that over the last 15 years, and he or she is talking about it on the House floor. That is intelligent. That is a fighter. That is somebody who doesn’t give a damn, nor should she, about what Paul Ryan has to say. She’s doing it right. Paul Ryan is a prime example of how to do everything wrong and still somehow continue to fail upwards. And that’s what’s the confusing part about Paul Ryan’s entire career. You know, the reason he was even shows is house speaker, which because he was an ardent tea partier, subscribing to that Ein ran philosophy in the antigovernment mentality of the tea party. He replaced John Bayner, who was more of a classic. I’m a horrible human being. I love corporations. Republican. Paul Ryan just wanted to burn everything down and he did. So, no, Paul, no thanks. Nobody in this country wants your advice, especially someone who is seen as much success as Ocasio-Cortez has in just the last few months.