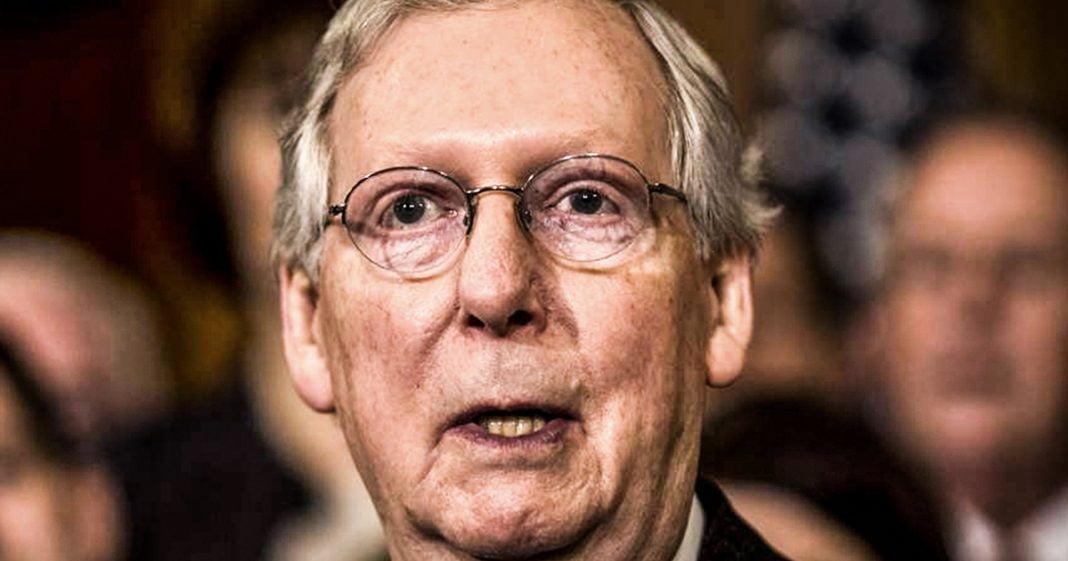 Mitch McConnell has changed the rules of the Senate so that Donald Trump’s judicial picks can get approved even faster. The “nuclear option” that McConnell is using will cut debate on nominees down to just 2 hours, a scary move considering the fact that several of Trump’s nominees have been classified as “not qualified” by legal groups. Ring of Fire’s Farron Cousins explains what’s happening.

Yesterday was a very interesting day for the American court system to say the least. First and foremost, we had two separate reports from two different organizations come out warning us how dangerous Donald Trump’s judicial appointments have been. Now that’s something we’ve actually been saying here on ring of fire for well over a year at this point. But it is nice to see that other organizations are paying attention to what’s happening on the lower courts and not spending all of their time only talking about the supreme court. But the reason that those two reports coming out yesterday became so important is because later in the day Mitch McConnell decided he was going to change the rules in the Senate and he got all of his Republican buddies that go along with it. And now Donald Trump is going to be able to appoint even more people to court throughout this country and various positions within the u s government without Democrats really being able to do anything at all.

To stop it. McConnell invoke these so called nuclear option, which basically means that from this point forward, anytime Donald Trump wants to put up a judicial nominee other than for the supreme court, instead of going through 30 hours of debate, they now are limited to two two hours, two hours to sit on the Senate floor and debate whether or not a person is qualified to have a lifetime appointment on a court here in the United States. Two hours is all Mitch McConnell’s going to give them. At this point, Donald Trump has appointed 92 total judges. That includes the two idiots he put on the U S Supreme Court 92 do you know where Obama was at this point in his presidency? You know, a little over two years in 1616 judges and he had plenty of vacancies. He could have appointed 92 but he didn’t and the Democrats during those years actually controlled the Senate.

Now I know there was still a lot of republican obstruction, but there’s still a thing called recess appointments and he could’ve just packed those courts. The first time Republicans went out of town for two days. That’s how that works. He just didn’t do it and now he let Donald Trump inherit almost 100 judicial vacancies and he’s already popped 92 people in in the first two years. And these are people who obviously in addition to having extreme right wing ideologies, pro corporate people, some of them have been rated by the legal ratings agencies as literally not qualified. That is the rating they got. They, these people are not qualified to sit on benches, but screw it and McConnell says do it anyway. We also have, people are literally my age and I’m a millennial that are now sitting on lifetime appointments in the court because these people are getting younger.

You’ve got people who have literally practice law for maybe three or four years. Some of them never even took a case to trial, so they haven’t even been in a courtroom as a lawyer and now they’re a district judge folks, Mitch McConnell, what he did yesterday was destroy the u s Senate so that Donald Trump can continue to destroy the judicial branch of government elections. Come and go. I mean every two four, six years, every member of the house, every president and every member of the Senate is up for reelection two, four, six but every two years we have elections and certain people are off. Obviously the, the, the political balance in the House of Representatives changes. It can change every two years. The Senate can change every two years. Whitehouse can change every four years. The judiciary, these are frigging lifetime appointments and the woman that he put on the bench that is a just turned 37 she’s got what, 50 years?

At least 40 years because you get good health insurance, good benefits. You make a lot of money. You can afford the best health care to live a long and happy life. 40 to 50 years with just that one person, that one right wing idea log shaping legislation, shaping the future of this country and ruling on cases where the vast majority of them, 99% of them won’t go to the Supreme Court, so she’s going to have the final say. That’s the woman I was talking about. He was actually never tried a case to trial. So her first real experience in a courtroom is being a district judge. That’s dangerous. Everything Trump has done to the judiciary is dangerous. But I think people need to understand that it’s actually not Donald Trump. That man’s not smart enough to know who should or should not be a judge in this country.

It is all reports have told us over the last two years it’s all coming from Mitch McConnell and that’s why they won’t do anything about Donald Trump’s declining mental faculties or the fact that he very obviously committed obstruction of justice because they want the judiciary. Cause once you capture that, that’s a hell of a lot harder to change than the makeup of the Senate, of the makeup of the House of Representatives. And believe it or not, the court system seems to have a little bit more power than the rest of the country, especially when you’ve packed it with your pro corporate anti-consumer anti civil rights buddies who you know are still going to be sitting on that bench possibly for decades after you’ve passed away. That has always been the Republican’s plan and they are successfully executing it right now.