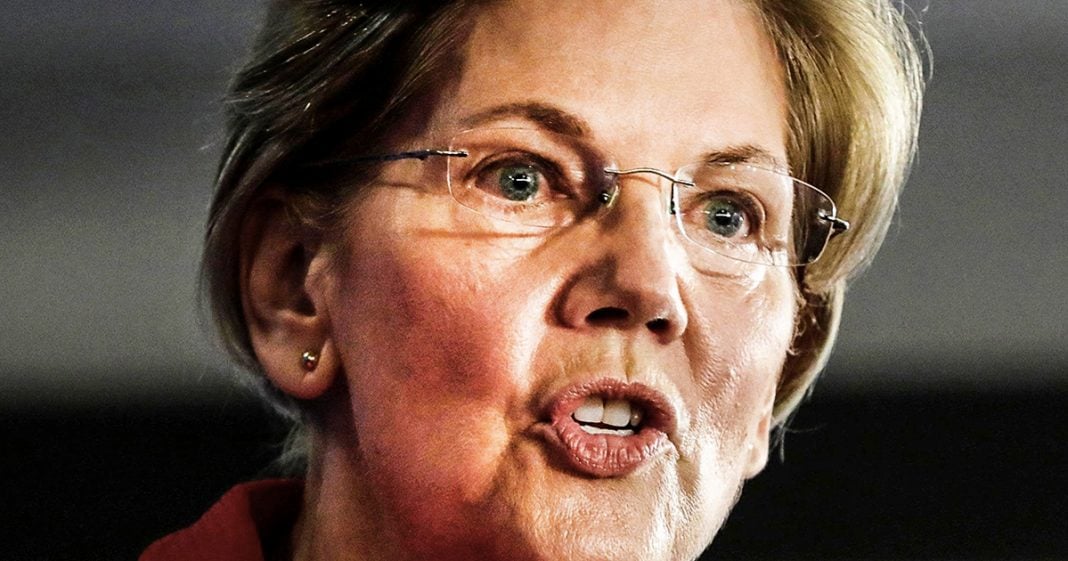 Democratic Senator and presidential candidate Elizabeth Warren has unveiled a new bill that would make it easier to send corrupt corporate CEOs to prison when their company breaks the law. This is something that has been needed for decades, as CEOs all too often get away with murder, and that is meant in the most literal sense. Ring of Fire’s Farron Cousins explains what this legislation would do.

Yesterday, Senator and Democratic presidential hopeful Elizabeth Warren introduced the Corporate Executive Accountability Act that would extend liability to corporate CEOs basically make it easier for this country to put corporate CEOs in prison. Now here are some of the specifics of what this particular piece of legislation would do. Uh, any executive, uh, that’s found guilty pleads guilty or enters into a deferred non prosecution agreement for any crime, uh, if they’re found liable or enter into a settlement with any state or federal regulator for the violation of any civil law. If that violation affects the health, safety, finances or personal data of 1% of the American population or 1% of the population of any state or if they are found liable or guilty of a second civil or criminal violation for a different activity while operating under a civil or criminal judgement of any court, a deferred prosecution or non prosecution agreement or settlement with any state or federal agency, they would therefore be subject to prosecution themselves.

So basically to kind of boil it down from that to, you know, find print there. If you are running a company and your company, say it’s a Wall Street bank is stole a lot of money from people. You did the Robo signing, you had some fraudulent mortgages there and he got popped with it in civil court. Okay, you’re going to pay a big fine, but under Warren’s new rules, the CEO of that company in any other executives would also be subject to criminal prosecution. Now that’s the piece of this puzzle that’s been missing is that okay, we got busted, we’ll pay a fine. The fine is still somehow less than the profits we made off the illegal activity, so we’re coming out on top. Nobody goes to jail. We swear we’ll change our ways even though we don’t, and that’s the end of it. Elizabeth Warren says, Oh Hell No.

That’s not going to be the end of it. You, Mr or Mrs CEO, one of the company to do this. You knew it was happening. Your running the entire company, so everything they do, it’s essentially like you yourself are doing it so we are going to prosecute you and puts you in jail. I love this planet. Almost a hundred percent I love this plan. Here’s what I don’t love about this plan. It doesn’t go far enough because this is only if you get busted for civil violations, meaning if you screw people over, it’s a, it’s a good start. It has to happen. So I fully support this legislation, but it also only affects your company if you pull in more than $1 billion in revenue per year. I don’t, I don’t like that. I think it should be. If you pull in more than $1 in revenue a year, if your company gets busted doing something illegal, you should be criminally prosecuted.

It doesn’t matter how much, how much money your company pulls in. If it’s the small business owner down the street, if his company is doing something illegal, that’s him technically doing something illegal, he should be prosecuted. That’s how this should work. Furthermore, you’ve got to go beyond just penalizing people who’ve been popped for the civil violations. And here’s what I mean. I’ve had the pleasure of working with some of the best lawyers in this country for the last 15 years. In many instances I’ve helped out on their cases. I have also personally interviewed nearly all of the living inductees of the trial lawyer hall of fame. I know these guys that are out there handling these massive cases, the men and women who have helped consumers for decades, and here’s what I know from the conversations with these people and from my personal experience having to go through these documents, these companies, whether it’s through a toxin that they’re releasing into rivers, whether it’s with a bad pharmaceutical or faulty medical device, they know that they’re going to kill people. That’s not an overstatement. They know that people will die and they don’t care. It’s this massive sociopathic mentality that has captured a lot of corporate America.

Those are the people that I want to see put behind bars. The CEO that signs off on the dangerous drug, whatever the hell it is supposed to treat, whatever new disease they’ve created to treat with these drugs, that guy needs to be in prison. The one who says, okay, well this, this pill we see it’s going to kill half the users, but we can make a couple billion dollars off of it. So go forward with it. Falsify the studies, lie to the FDA, get it on the market, and then we’ll pay off the lawsuits when they come. But we will have made more money than we pay out. So it’s a net benefit for this company. Throw him in jail. That’s the guy that needs to be locked away. The people making those kinds of decisions because people die in this country every single day from dangerous pharmaceuticals. Every day.

People develop cancers every day in this country because of the toxic corporate pollutants that they’re dumping into the water and into our atmosphere every single day. A new diagnosis comes out from somebody who’s been exposed to a corporate toxin. So this, this, this bill, the warrant has put out is a phenomenal start. I love it, but I want to see it expanded because it’s not just the people who steal your money. We have plenty of corporate CEOs in this country today who have signed off on actions that knew were going to kill Americans. Those are the people that should be serving life sentences in prison because there are no different than somebody that goes out there and murders 30 or 40 people. They’ve killed a hell of a lot more and they never get held accountable.