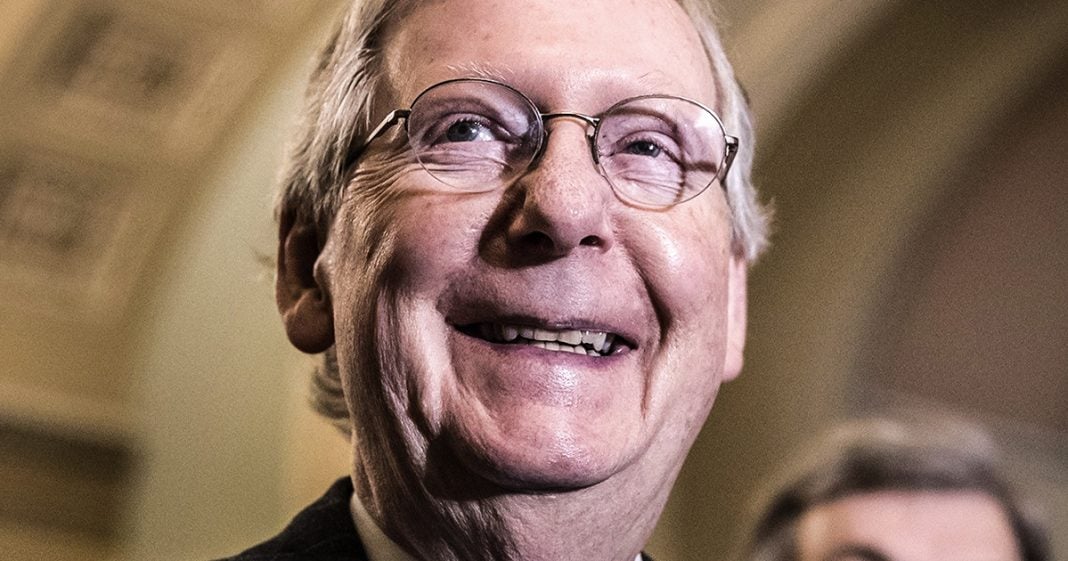 It only lasted about a week, but the Republicans’ latest attempts to dismantle the already-fragile American healthcare system have come to an end…for now. Donald Trump now says that Republicans will wait until after the 2020 Presidential (and Congressional) elections before they begin taking apart the Affordable Care Act. This was a calculated move by the Republicans, and Ring of Fire’s Farron Cousins explains what’s behind this sudden shift by the Party.

So we actually have a little bit of good news today and that good news is they’re Republicans have finally agreed that they’re not going to completely dismantle health care for the United States until after the 2020 presidential election. So we’ve got, you know, what, a year and a half to continue with Obamacare before Republican’s come along and just completely destroy it and kick tens of millions of people off their current insurance and basically prohibit people with preexisting conditions from ever being able to afford coverage. Again, that is what the Republicans are telling us. Mitch McConnell came out yesterday. It said, look, I’ve talked to the president. I told him, we can’t do this right now. It will have to wait till after the 2020 election. Donald Trump actually listened to McConnell and he said, we’re gonna wait. We’re gonna put it off until after 2020 when I win back. The White House.

Republicans get a bigger majority in the Senate and Republicans win back the House of Representatives. And then literally just a few hours later, Donald Trump tweeted out the following. He said, Republicans are developing it really great healthcare plan for with far lower premiums and deductibles than Obamacare and other words that will be far less expensive and much more usable than Obamacare vote will be taken right after the election when Republicans hold the Senate and win back the house. So according to Mitch McConnell and Donald Trump from earlier in the day, they’re not even worried about healthcare right now. They’re not doing anything with it. They’re not coming up with a plan. That was the deal. And then Trump on Twitter a few hours later says, no, we’re working on planning right now. We’re going to have it in place. We’re going to be ready to go. We’re going to pass it as soon as the 2020 elections are over with and everything is great and Republicans rule everything again, not going to happen. Okay?

What’s happening here right now is one, Donald Trump is too stupid to know when to keep his mouth shut, but two, the reason that Republicans want to kick the can even further down the road is because they know they don’t have any ideas in spite of railing against the Democrats on the issue of healthcare for a decade now, Republicans have still been unable to come up with a single viable plan that the American public would like their last Obamacare alternative that they tried to use for their repeal and replace had a 12% approval rating among the public 12% okay.

And even after that, you know, the year that’s passed since then, nobody in the Republican party sat down and said, okay, well let’s, let’s keep working on this. No, they just shelved it. It said, well screw it. I guess we’re bad at ideas and we’re just going to keep trying to repeal and maybe replace eventually and now Donald Trump kind of put them on the hot seat. It’s like, no, we’re making this thing. We’re doing it. It’s going to be great and awesome and wonderful. And to be honest, if Trump was being serious, if it would have lower premiums, if it would still completely cover people with preexisting conditions, we’re open to change, right? I mean, we can’t just say, oh, it’s a bad deal because Republican’s created it. If they actually came up with a good plan, I would support it, but they won’t because they can’t because they don’t have any ideas and they’ve had 10 years to sit down and think about it.

Republicans, I’ll tell you what, right here, right now you want to, you want to win in 2020 you want to win on the issue of healthcare work on Medicare for all right? Cause you’ve even got some Democrats right now who are a little too wishy washy on it. You want to be the real savers or the United States. Give us Medicare for all hell. You’ve seen the polls yourselves. You know a majority of people in this country, including majority of your party, wants this plan in place. So why not be the ones to give it to us? Don’t water it down. Don’t let big Pharma come in be the friggin heroes that you’ve always wanted to be. Everybody wins in that situation, right? But you’re too stupid and too selfish and too greedy to do that on your own. So instead, we’re going to listen to you for another 18 to 20 months pissing and moaning about how much you hate Obamacare, but you’re too damn lazy to come up with a better alternative yourself.