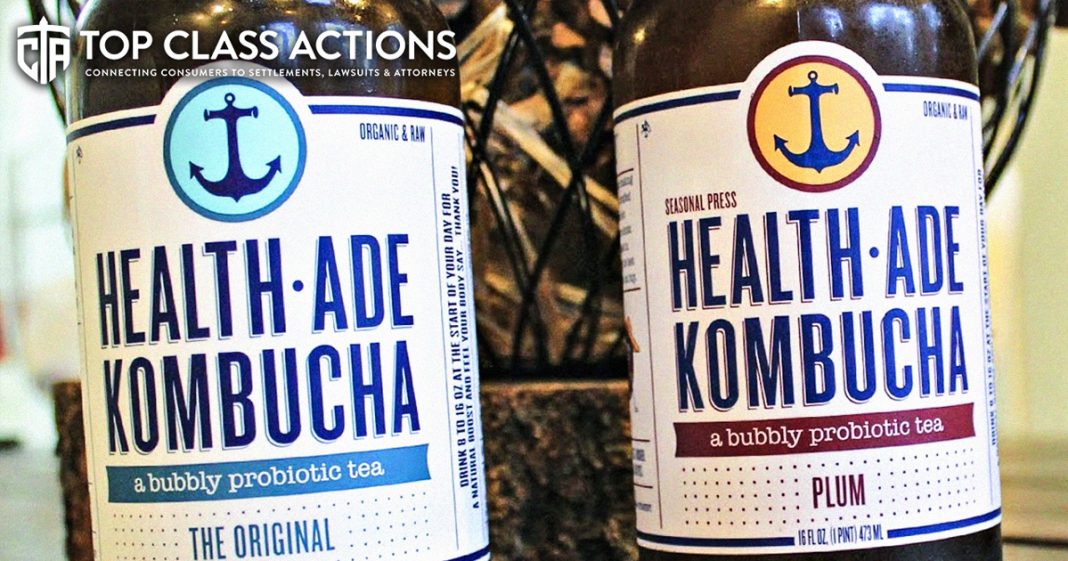 Whole Foods has agreed to settle a class action lawsuit for $4 million, ending claims that the company sells Health-Ade kombucha which is mislabeled as non-alcoholic when it really contains alcohol from the fermentation process. As part of the class action settlement deal, Health-Ade has also agreed to change the labeling on its kombucha to include a warning that the beverages contain trace amounts of alcohol. The warning will reportedly be geared towards pregnant and breastfeeding customers, and will recommend that such customers should talk to their doctor before drinking the kombucha. Ring of Fire’s Farron Cousins discusses this with Scott Hardy from Top Class Actions.

Farron Cousins:                  If you’re a consumer and you reach for a nice bottle of tea, the last thing you want to realize after you’ve gotten halfway through the bottle is to look down and say, oh my God, this stuff actually has alcohol in it and I didn’t know that. Unfortunately, a lot of drinkers of several popular brands of kombucha have realized exactly that and unfortunately they’ve realized it a little too late. One of these brands, Health-Ade, is now facing a class action lawsuit over the alcohol content in their kombucha tea that they’re saying is non-alcoholic.

Joining me now to talk about this as Scott Hardy from Top Class Actions. So Scott, we’re not talking about a ton of alcohol here. It’s not like taking a shot of hard liquor or drinking a glass of wine. It’s 0.5% which to the average person, obviously that’s really not going to do anything to you. But there’s a lot of people, you know, maybe it’s a health problem, maybe it’s a pregnancy, maybe you’re breastfeeding. Even that small amount of alcohol can come with big consequences, can’t it?

Scott Hardy:                          Exactly. When, when you’ve got people that are specifically avoiding alcohol, whether even alcoholics or whether they just are trying to stay away from for health reasons or as you said, breastfeeding, any trace of alcohol is bad. And so when you’ve got a huge retailer like Whole Foods selling kombucha, kombucha, that the, they need to go ahead and call it out there and be aware of it. And the, the other issue here is that it appears that during some of their tests that the product may have actually contained more than 0.5% alcohol and that is absolutely not allowed.

So it was kind of a, of a ding on a couple of fronts for them. But they are working to actually fix the problem. And as part of the class action settlement, they’re not just going to be putting some cash back into their buyers pockets, but they’re changing their manufacturing and bottling process to ensure that they never have more than 0.5% alcohol in it. Along with, as you said, warning people on the bottle. I remember the first time I picked up a bottle, I had no idea.

Farron Cousins:                  You know, it, to me it is very interesting because this isn’t necessarily something that will, at least personally, I don’t feel like Whole Foods and, and Health-Ade, we’re actually trying to cover up the fact that there was alcohol in it. This was to me more of just a little bit of I guess negligence, I don’t want to say criminal negligence by any stretch of the imagination, but it was just, okay, we’ll put it down there on the bottle like we’re supposed to do.

Technically that still qualifies as quote non-alcoholic because even non-alcoholic beers or whatever it is, they still contain trace amounts of alcohol do to the fermentation of the sugars in the drink, which is what happens with this kombucha. So I don’t think it was malicious, but I do think in this particular instance there was some negligence on their part here. What do you think?

Scott Hardy:                          Yeah, I definitely think there was some negligence. So when you take a look at, you know, a huge retailer like Whole Foods that’s, that’s well trusted by its buyers, that they wouldn’t have done some more testing to make sure that during the fermentation product it wasn’t so fermented to add that extra alcohol above 0.5%. That’s, that’s frankly surprising and I think it’s a bit irresponsible on the manufacturer’s part.

Now personally, I don’t ferment my own kombucha, so I don’t know the whole process and I don’t insist to, but you know, the plaintiffs in this matter went ahead and went through the testing process at a large scale to make sure that they were right before they filed this class action. But thankfully Whole Foods and Health-Ade have come back and, you know, they’re changing their practices. And then for those people who are Whole Foods customers that did buy this kombucha, there’ll be able to get a $4 per bottle purchased up to $80 if they have receipts.

If they don’t have receipts, there’ll be able to get the $40 back. Now you can’t submit any claims yet. The settlement website is not up yet, but of course we’ll notify you once it is. So if you’re a die hard kombucha Whole Food shopper, you’ll be able to claim some cash.

Farron Cousins:                  Absolutely, and in the meantime, you know, whether it’s, it’s this particular brand, the, the Health-Ade at Whole Foods brand of kombucha or, you know, any other, consumers need to be aware that you have to check the labeling on things like this. Because anytime you have any kind of fermented tea or beverage, there is a very, very good possibility that there are trace amounts of alcohol. So anybody who is avoiding alcohol do to dependence issues, liver problems, pregnant, breastfeeding, whatever it is.

If these are the drinks that you enjoy, double check those labels because they may not be as safe as you think. Scott Hardy, Top Class Actions, thank you for telling us this story. And if anybody needs any more information, make sure you follow the link in the description of this video. Head over to topclassactions.com, checkout what Scott and his team are working on every single day. It is the most important news that consumers in this country need to be aware of. So Scott, again, thank you very much for talking with us.