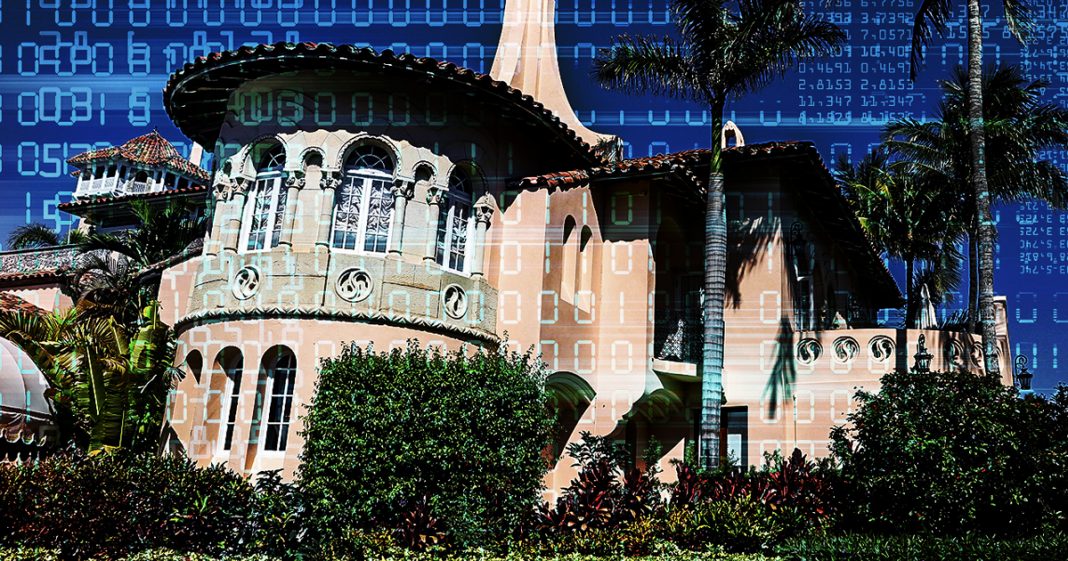 A Chinese national attempting to enter Mar-a-Lago with a USB drive filled with malware has been arrested. The Secret Service found that the woman was carrying multiple laptops and cell phones in addition to the malware. The woman was drawn to Mar-a-Lago by the embattled massage parlor owner that has been selling access to high-profile Republicans at the golf resort – the same woman who watched the Super Bowl with Donald Trump. Ring of Fire’s Farron Cousins discusses this.

Over the weekend, a woman was arrested attempting to get into Mar-A-Lago, Donald Trump’s south Florida golf resort. And when she was arrested, they found that she was caring for cell phones, one laptop, one external hard drive, and one USB drive loaded with all sorts of malware. Now, unfortunately, the, uh, arrest record in court record do not tell us what kind of malware was on the device. So we don’t know if the woman was attempting to go in there, install the malware, and start stealing secrets, or if she just wanted to put some annoying popup ads on Mar-A-Lago computers. I’m sure we’ll find out the truth in the coming days and weeks. But for right now, all we have is speculation. But here’s the thing. When the secret service originally stopped, this woman, she was a Chinese national, they asked her what she’s doing here and she said, well, I’m coming to use the Mar-A-Lago Pool.

And then they questioned her a little bit more and she said, no, I’m here for this UN benefit thing. You know the, the friends of the US and China event that was taking place that I learned about from Cindy Yang. Now, Cindy Yang, if you’ll remember, is the woman who owned previously the massage parlors that just got busted for prostitution that also took down Robert Kraft, but Cindy Yang in addition to that is the woman who watched the Super Bowl with Donald Trump sitting right next to him. She’s been photographed with multiple high profile Republicans here in the state of Florida. Matt Gates, our new governor, Ron DeSantis, our old governor Rick Scott, and she’s the one who’s been selling access to Mar-A-Lago and the wealthy Republicans inside to Chinese nationals, and that is how this woman who was loaded down with malware found out about this event that ironically had actually been canceled after the news came out about Cindy Yang.

They decided, you know what, probably not a good idea to hold this event here because this woman is selling access to people who may not be trustworthy. Now, so far, only congressional Democrats have called for an investigation into Cindy Yang selling access to Mar-A-Lago. But I think this story on a light, a fire under everybody’s asses, because bad things are happening. Donald Trump’s constant nonstop trips down to Mar-A-Lago and his, I guess Pinch Sean for speaking about policy and asking club members for advice on what to do in this country that is just opening up a world of national security pain for the United States. And this woman who tried to get in with all of these electronic devices knew that she knows that Trump goes down their runs, his mouth says things that other people ought not be hearing. Okay.

And she wanted to likely take advantage of that. Again, we’re not going to know her true intentions till we find out or it’s released. What kind of malware is on there? Because again, malware could be anything. It could be a program designed to steal files from one computer and send them to another location. Or it could be just, you know, malicious ads popping up every few minutes on your computer. We won’t know until we get the final, uh, computer forensics on this flash drive. But I’m willing to bet. Her intention was to not go down there and Annoy Mar-A-Lago members with popups. She knows that Trump goes down there and spill secrets. She knows that the secret service is down there with their computers. She knows that there are other people who have access to top secret us information that like to hang out there with the president, and she knows that Cindy Yang is the woman who can get her in to get access to these people. This is a big problem, folks. Everybody knows we’re Trump goes, everybody knows what Trump does. Everybody knows that Trump can’t keep his damn lips shut it so they know where to go if they want to steal us secrets. And that is exactly what this woman went there to do.