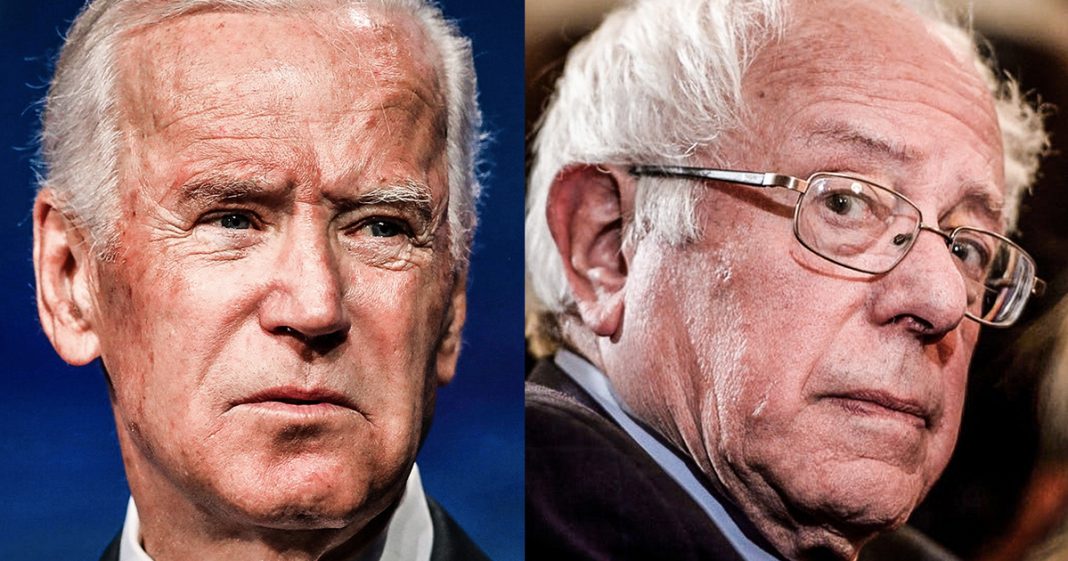 The Democratic establishment can’t help but see a terrifying, all-powerful boogeyman when they look at Bernie Sanders. This time around it is Joe Biden’s advisers and staff who are blaming Bernie Sanders for the continued trickle of stories of women saying that Biden made them feel uncomfortable with his behavior. This is a massive stretch, and it is meant to serve as a distraction from the real issues, as Ring of Fire’s Farron Cousins explains.

Joe Biden’s inner circle smells a conspiracy and that conspiracy is being handled personally, at least in part they say by Bernie Sanders. According to a recent report by Axios, Joe Biden’s inner circle, his advisors, his buddies, his pals, they believe that Bernie Sanders and his campaign are behind the recent women coming forward and saying that they weren’t comfortable with the way Joe Biden behaved around them. Now, to start things off here, let’s make one thing completely clear. Nobody as of this recording here is, is saying that Joe Biden sexually assaulted them or sexually harassed them. They just became incredibly uncomfortable and creeped out by his behavior. Even the people who’ve come forward say, I don’t think there was any malicious intent behind it. And I don’t think Joe Biden is a predator. So there we go. I mean, that’s from the women who have come forward and there’s multiple women at this point, not just Lucy Flores, but Joe Biden’s people think that Bernie Sanders is behind this and they’re blaming him.

Why? Well, for one, because Lucy Flores happened to be a, uh, a Bernie supporter back in 2016. So, of course, since she supported him four years ago, obviously she’s, you know, working with him now to put these stories out there. What’s actually happening is that Biden’s people are attempting to deflect, you know, instead of Biden coming out and saying, listen, I’m sorry, that’s who, that’s who I am is what I do. I understand now in retrospect that it makes people creeped out and I’m not going to do that anymore and I’m going to be more conscious of people’s personal space and I’m not going to touch them if, if they don’t want to be touched. I am a hugger. I get it all. I’ll stop because I realized that, you know, probably not something I should be doing anyway. That’s whole Biden had to do that.

Was it that, that, that little short diatribe, sincere and he couldn’t even do that. His, his staffers can’t even, you know, say, Oh, you know this, this, this looks really bad, but we promise you it’s not as bad as it is. It is. Joe Biden’s just a nice, friendly guy. He didn’t mean anything malicious with it. Even the women have said that we need to move on from this because this is distracting from the real issues. No, they didn’t even say that. They said, damn that Bernie Sanders and his acolytes out there doing this to all of us owe everything wrong with the Democratic Party. Is Bernie Sanders fault. Bernie Sanders is behind all of the ill that has befallen the Democrats for the last four years. I’m not kidding about that statement either because that is what these establishment types actually think. They’ve been blaming Bernie for God damn everything since 2015 and it’s sickening.

It’s disgusting. And what it does is it provides them cover from having to be a little introspective look at themselves and try to figure out what went wrong and where it went wrong and why it went wrong. It’s so much easier to just blame Bernie is Bernie did it. Bernie. Bernie screwed us again. Bernie’s making these women come out with all these stories. Now listen, a month ago, whatever it was few weeks ago, everything kind of runs together at this point. Uh, when the stories came out that Bernie Sanders had members of his staff that were behaving inappropriately towards women, we got headlines for weeks, folks, weeks saying, dammit, Bernie, why didn’t you do more? Why didn’t you do more voters? Are you going to let this go? Look at how bad Bernie is. He didn’t even know it was happening.

And now with Biden, those same people, those same attackers against Bernie for not knowing something was happening on his staff. They’re out there saying like, oh, Biden’s thing, it’s no big deal. It doesn’t matter like this is, these women are overblown there, there Bernie Sanders plants go through and look, go through and look at the same people who attack Bernie Sanders for not knowing this was happening on his staff. And I’m not excusing that either. By the way, he should have known he should have paid more attention. Somebody should have brought it to his attention and he should have handled it right then. But the same people who attacked him for that are the ones defending Biden today. And I’m not saying by does a sexual Predator or that he’s ever assaulted anyone. I don’t think he has. I don’t think he is, but he made these women feel something. They didn’t want to feel uncomfortable in their own skin. Nobody on this planet has the right to make another human being feel that way, but unfortunately that is an admission that the Biden campaign absolutely refuses to make because it’s a hell of a lot easier to just sit back and say, nope, this is a Bernie Sanders problem. Everybody needs to hate him and love me.