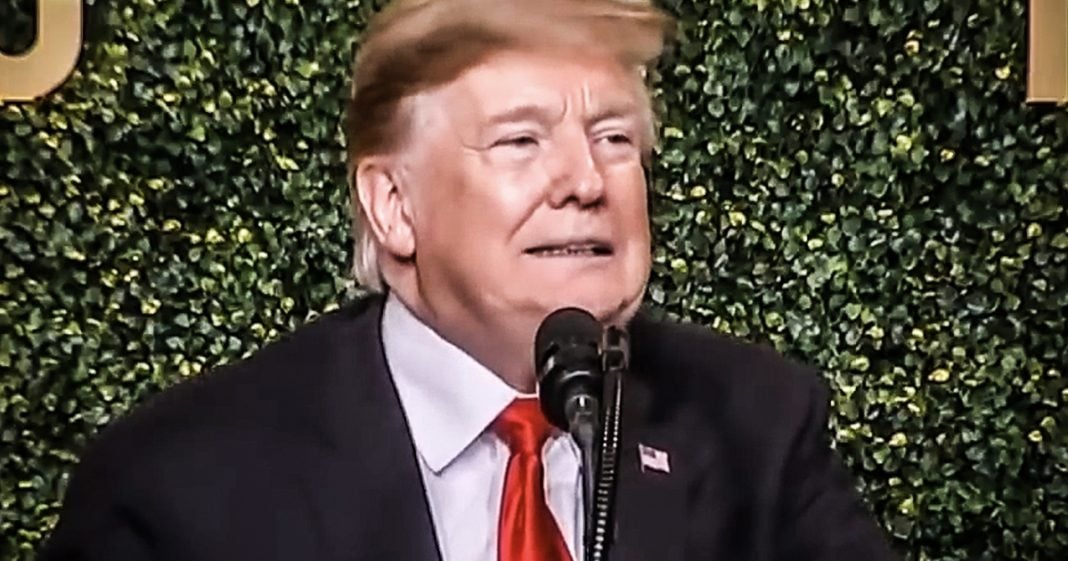 Donald Trump keeps lying about where his father war born. He said yesterday that the “noise” from windmills causes cancer. He claimed that he wants to “get rid of judges” so that he can enact his immigration policies without oversight. The man is either stupid, suffering from a seriously debilitating mental illness, or in the beginning stages of a tyrannical dictatorship – or possibly a combination of all three. Ring of Fire’s Farron Cousins explains how, in just one day, Donald Trump proved beyond a doubt that he’s not mentally fit to be president.

It is way beyond time that we start to legitimately and fiercely questioned whether or not Donald Trump is mentally fit to be the president of the United States. Do you want some examples of why Donald Trump may not be mentally fit to be president of the United States where there are plenty to choose from from his first two years in office. But first I want to take you way back in time to yesterday, April 2nd, 2019 let’s start with the first one. Here is a clip of Donald Trump warning us yesterday again about the dangers of windmills. Here it is.

If you, if you have any windmill anywhere near your house, congratulations. You have just went down 75% in value and they say the noise causes cancer. You tell me that one. Okay. Our air, you know the thing makes it a soda and of course it’s like a graveyard for birds.

That’s right folks, the noise, the noise from windmills can give you cancer or so they say this is the same guy who’s administration has lifted some of the restrictions on as best dose, but he’s telling us windmills cause cancer in addition to killing all the birds in the country as he’s also claimed. But if that’s not enough for you, that windmill noise causes cancer, which by the way, it doesn’t in case anybody needed to hear that. Let’s go back. Earlier in the day yesterday when Donald Trump repeatedly told reporters that his father was born in Germany, Donald Trump’s father was, was born in New York like that. That’s an easily verifiable thing. There are records of that. By the way, Donald, in case you didn’t know that Fred Trump born in New York, he may have spoken German, but that guy born and raised in the United States of America, and yet you somehow, and this is not even the first time you’ve made this claim, said that your father was born in Germany, I would think he would know where your own parents were born. Okay.

And if that doesn’t do it for you. Another thing from yesterday was Trump talking about immigration and how he wants to get his plan done and he might have to quote, get rid of the judges, get rid of the judges. The executive branch is threatening to get rid of parts of the judicial branch of government because he doesn’t like what they’re doing. So we’re left with basically three options. Donald Trump has either painfully stupid suffering from a very debilitating mental illness or this country is actually in the early stages of the beginning of a tyrannical dictatorship that wants to overthrow the other branches of government. Personally, I believe there’s a combination of all three at play here. I do believe based on all of the evidence we have seen from this man that this guy is painfully stupid. I also believe that he has something wrong with him mentally that is preventing him from properly being able to remember past events.

Perhaps it is a form of dementia. Perhaps it is a form of Alzheimer’s, but that seems like the kind of thing that does need to be checked out. And in terms of the get rid of the judge’s statement, that’s straight up tyranny folks. We have three separate branches of government for a reason to provide a series of checks and balances. When the executive branch goes overboard. You got Congress in the judicial branch to reign him back in and he wants to get rid of one of those checks. There is no way that that is okay. I don’t even understand how even the most ardent MAGA hat wearers would look at that statement here. That statement because everything you said, by the way that I’ve mentioned, it’s all on video. I only wanted to show you the windmill thing, but all of the rest of these were on tape. These are on tape including one video to is in our cc speech that was broadcast live on C-Span. He said during the speech like, Oh, a copy of this speech is going to leak out to the press. There were frigging cameras like on you, dude, this was live broadcast and you didn’t even realize that, so chalk that one into the, something wrong with your mind. Column two, this is nuts. This is nuts. This man is crazy in all of these statements from the last 24 hours. Prove that beyond a doubt. So my question to you, it’s what the hell do we do now? Seriously, we have a congress that is not going to invoke the 25th amendment. The vice president’s not going to do it. The Senate’s not going to do it. The cabinet sure as hell isn’t going to do it. The intelligence agencies aren’t going to do it, but it needs to be done. This man is not mentally fit to be the president of the United States. That much is obvious and if you need more evidence than what I’ve given you, go back more than just the last 24 hours and you’re going to find plenty of it. We’ve been talking about it since the day the guy was sworn in and swore that his crowds were bigger than Obama’s. Even though the photograph showed the opposite. He is incapable of telling the truth. He is incapable of accurately remembering what happened in the past for gets basic details about his own family and is now threatening to overthrow. Part of the United States government himself. Any one of these things taken individually would a very serious red flag, but at this point, there are so many red flags out there that I don’t even see how anyone could look at this man and say, you know what? I still support him. It’s just nuts at this point.