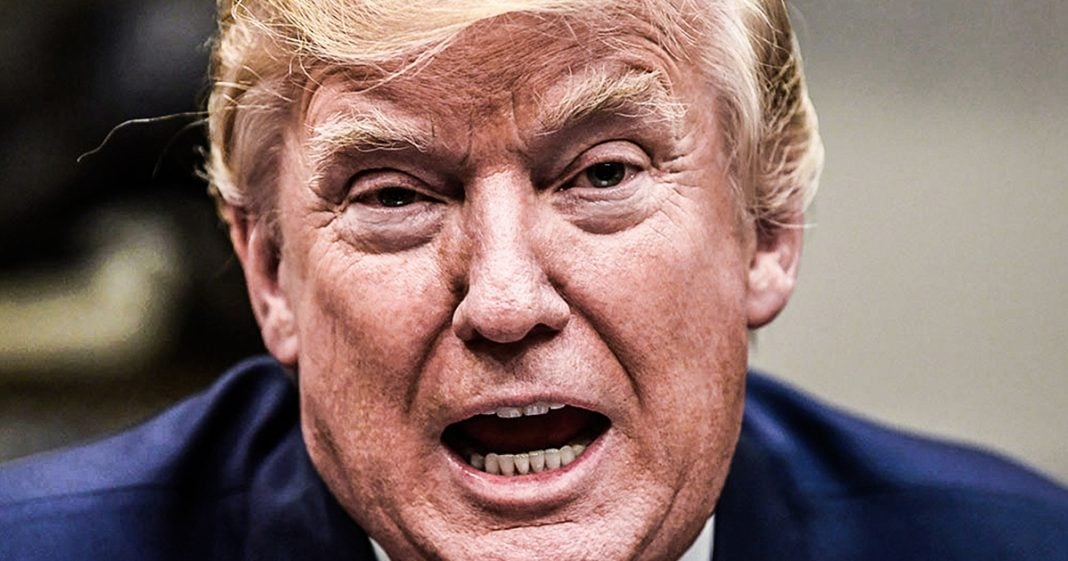 During a speech at the NRCC fundraiser this week, Donald Trump told the crowd of Republicans that they needed to be a little “more paranoid” about the Democrats stealing the 2020 election. He went on to claim that there were a lot of  oddities with the 2018 midterms and he believes that Democrats stole several close elections. Ring of Fire’s Farron Cousins talks about the only case of REAL voter fraud that happened in 2018, and it wasn’t the Democrats who were pulling off that scheme.

Yesterday, Donald Trump spoke to the national republican campaign committee, the NRCC, and he told the group of gathered Republican members of Congress that they need to be a little more paranoid, never message you want to hear from the president of the United States telling you that you need to be more paranoid. But he says that in the 2018 midterm elections, there were a lot of races that were very, very close and yet all of them ended up going in favor of the Democrats. So obviously the Democrats were out there rigging elections. That is what Republicans need to accept and so therefore they need to be a little bit more paranoid or so Donald Trump says, here’s a quick kind of paraphrase some of the quotes here. There were a lot of close elections in 2018 and every one seemed to go democrat. You’ve got to be a little more paranoid than you are.

You don’t like it either, but you don’t want to say it because you’re afraid of the press. So Trump says, not only do you need to be paranoid, but you are paranoid, but you just won’t say it because you don’t want the press to come after you because you’re paranoid. So what Trump is doing after Republicans got their butts handed to them in the 2018 congressional midterms, he’s already making excuses and we knew that was going to happen. He’s been doing it since day one, but he’s still on those excuses. The same excuses that he used to try to undermine the fact that he lost the popular vote in 2016 by roughly 3 million votes, yet still became president because the electoral college, he is always going to claim that Democrats are the party of voter fraud. Even though the only instances of voter fraud that we saw from 2018 all revolve around Republicans, and it was a highly sophisticated scheme.

I’m sure by now everybody knows what happened in North Carolina’s ninth congressional district, but she had the Republican candidates, people going out there gathering up absentee ballots and mail a mail in ballots and just filling them out for people and then submitting those as if the people themselves had filled them out. I that was 100% voter fraud carried out by a Republican candidates team, and yet Trump is up there telling us we have to be paranoid of the Democrats. It really either. There were also instances in 2016 of Republicans trying to vote for Donald Trump twice. You want to be paranoid about voter fraud. You need to start within the Republican party because that seems to be where it’s all coming from your voter fraud commission that you put together because you want them to find all those illegals that were voting. Yeah, didn’t come up with any. The talking point that we hear from Fox News, the Democrats want illegal immigrants to come in here to vote for Democrats.

That’s not a thing that actually happens in your own commission. Proved it, but you’re still out there repeating this false talking point, this lie. Let’s not even call it a false talking point. You’re still out there repeating this lie because you’re so mad that Republicans got their butts kicked in 2018 and here’s the thing about the 2018 elections. Everybody knew this was going to happen. It typically, statistically and historically happens to new presidents during the first midterm in their first term in office. That is what happened. We all knew it was going to happen, but it’s more than that as well, has to do with the fact that the Republicans have no ideas and voters are getting sick and tired of it. But sure, go ahead and wine and worn Republicans that you’ve got to be paranoid when in reality, it’s the Republicans who should be paranoid about law enforcement officers looking over their shoulders to make sure they don’t commit more voter fraud.