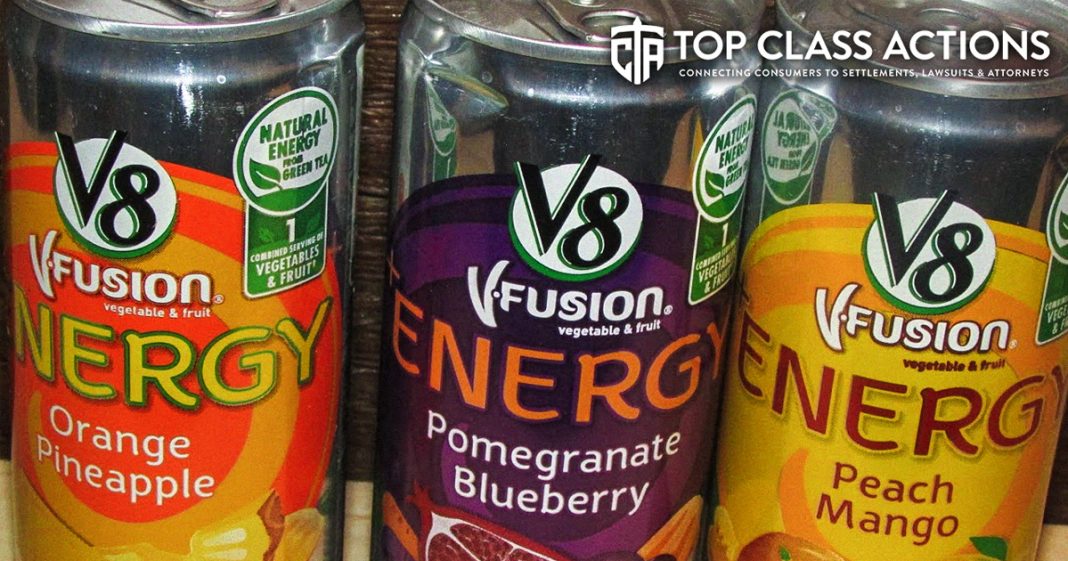 A class action lawsuit challenges advertising claims that V8 +Energy causes “no caffeine crash,” unlike other sources of caffeine. Allegedly, Campbell Soup Company advertises that V8 +Energy contains caffeine that will not cause a “caffeine crash,” and that the caffeine will last longer than other sources of caffeine. Ring of Fire’s Farron Cousins discusses this with Scott Hardy from Top Class Actions.

Joining me now to talk about one of these claims is Scott Hardy from topclassactions.com and Scott, of course, I am talking about this V8 energy class action lawsuit that’s happening right now. This is a very popular energy drink compared to some of the other ones because it’s V8, which everybody associates with being healthy, being honest, being real. But this class action says that’s not how they are with this particular energy drink. Take it from there.

But of course the science may not actually agree with it and it appears that the class action alleges that Campbell’s is nitpicking and the, the science that agrees with them while the majority of science about caffeine and whether it’s derived from tea or whether it’s derived from coffee, doesn’t actually agree with the Campbell’s marketing execs. And that’s the main contention in this class action.

Farron Cousins:                  Yeah, V8 or I guess Campbell’s they say it, because it’s made from tea, it has this L-theanine amino acid and it’s that amino acid that gets into your body and it works with the caffeine and it essentially tells the caffeine slow down. We’re not going to release all at once. We’re going to do this over a course of a few hours here. Let’s take it slow. And the science is telling us that that’s not how amino acids work. That’s not how L-theanine works.

In fact, that’s not how anything works. Nothing according to scientists, you know, some studies I should say, nothing’s going to slow the release of caffeine. It gets released how it gets released. You can’t slow it down. You can’t stop it. You can’t, you know, make it last longer. It essentially, it is what it is. That’s what the science has told us here and V8 or Campbell’s, excuse me, they tried to tell us, no, no, no, no, no.

It, they, these chemicals he works well with caffeine. They get along, they take it slow together. So, so there’s a lot of problems here. And unfortunately though, these are problems that involve science and reactions inside the body. Those are a little bit harder, not impossible by any means, but those are a little bit harder to prove in court. Because again, as you pointed out, you may have conflicting studies here.

V8 may have cherry picked some info. They may have even, you know, maybe they’ve got people who do the studies. I don’t, I don’t know. Maybe they do. We’ve seen it plenty of times. So this is a tricky one, isn’t it? I mean, you know, when you deal with science and, and molecules and amino acids and everything like that, things get a little bit more complicated at that point.

Scott Hardy:                          Right. Once you start looping in scientists and you’ve got to make sure that your, your i’s are dotted, your t’s are crossed. And unfortunately according to the V8 class action, the only difference from caffeine from tea that has from caffeine, from coffee is the fact that because of the L-theanine, L-theanine in tea, it impairs attention and energy more than coffee does.

So while you’re trying to go ahead and drink your V8 energy drink to get some more awareness and try to be a, have a healthier option through your day instead, it actually might be impairing your attention and your energy rather than actually helping you out. And that’s really is the opposite effect that you want when you’re, you know, chugging an energy drink at work to stay at the top of your game.

Farron Cousins:                  What’s interesting to me is that, you know, nobody is out there saying that this product is not safe or that this product is bad. So you know, if V8 and Campbell’s had simply just said, hey, it’s V8 energy, it’s got some caffeine in it, that’s the end of the story. You know, we don’t end up with any of these lawsuits saying, hey, you’re advertising this, but you can’t back it up with the science.

So it’s just another one of those examples where all you had to do as a company was just say, hey, you like V8? Do you like caffeine and energy? Now we have a drink that has both. Here you go, consumers, everybody goes home happy. But they had to take it that extra step. They had to say our caffeine is better than their caffeine and now they’re in a lot, well I can’t say a lot of trouble, but they’re in trouble at this point.

Scott Hardy:                          Right. Exactly, because, you know, they’ve got this energy drink that’s flavored. It’s a blend of vegetable and fruit juices, but the, the drinks actually mostly contain sweet potato juice. But they do have the flavors, mango, blueberry, pineapple, black cherry. And so they’re, they’re trying to make it tasty but and try to become a bit of a healthier option by saying it’s the caffeine is derived from green tea, but it appears, at least according to this class action that it doesn’t really do anything for you. In fact, it may not help you as much as just a plain old cup of black coffee would.

Farron Cousins:                  Absolutely, and if anybody out there enjoys this V8 product, I encourage you, follow the link in the description of this video, get more information about what’s happening and while you’re there, check out topclassactions.com weekly newsletter. It contains some of the most important information that consumers in this country need to be aware of. Scott Hardy with Top Class Actions. Thank you very much for talking with me today.