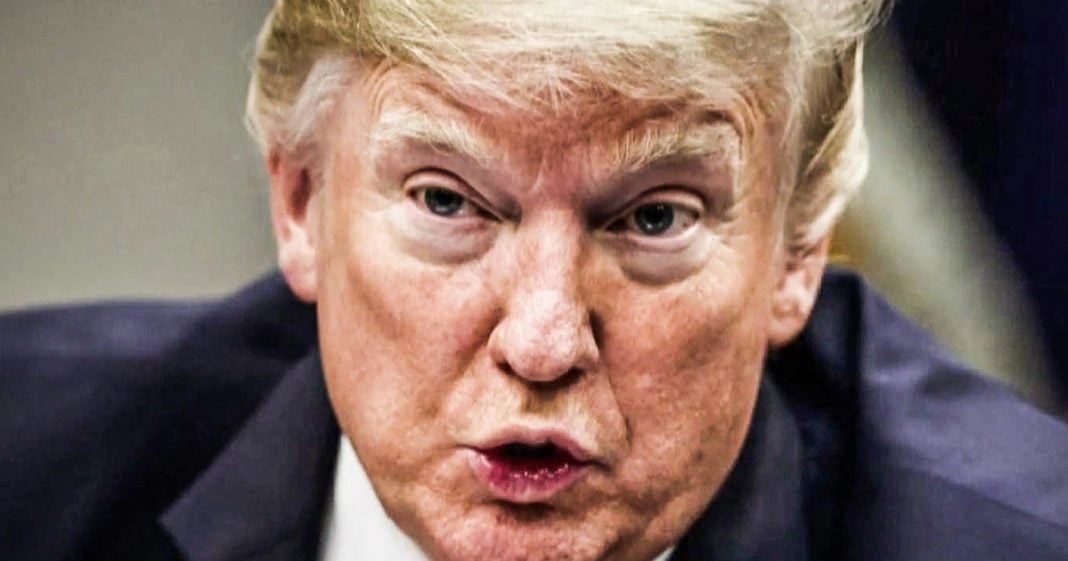 Donald Trump says that he’s ready to shut down the US-Mexico border because, he says, Mexico isn’t doing enough to stop migrants from coming into our country. That’s a complete lie, but that hasn’t stopped Trump in the past. His plan would be an economic nightmare, and economists predict that it could cost our country $1 billion every single day that the border is closed. Ring of Fire’s Farron Cousins discusses this.

One of the worst things that we’ve learned about Donald Trump’s presidency is that you cannot rule out any idea as being too stupid for this guy to make a reality. And that’s what we’re dealing with right now with his, a suggestion, I guess, that we close the u s Mexico border just shut down the border, no commerce going through, no people going through, nothing happening along that southern border. And he’s proposing doing this because according to him, Mexico was just not doing enough to stop people from coming into the United States, even people who are not Mexican citizens. Now that’s a complete lie because Mexico actually has some pretty strong immigration laws. The problem they’re facing is that they are unable to stop the flow of people from their southern border. They’ve got two borders they got to worry about. They’re not necessarily overly concerned with what’s happening at the u s Mexico border because it’s nowhere near as bad as what’s happening along their southern border.

But unlike Donald Trump, they’re not turning people away, threatening them, having temper tantrums on Twitter. They’re actually trying to accommodate these people and help them out. Trump just wants them all gone. And that’s why Mexico struggling a bit because they’re not being heartless, horrible human beings. They’re actually trying to help these people, but nonetheless Trumps mad. He’s always mad and he’s always got to find something to whine about. So right now it happens to be the southern border, but if he were to carry through with his plan and actually shut down this border, the United States would lose more than $1 billion every single day in economic activity. So Trump’s little temper tantrum right now is likely to start costing us more than $1 billion every day. At first, that number actually ticks up. The longer he decides to close the border, if he does go that route. Here’s what think progress has put together to help explain what all these numbers are and where they came from.

Right now, over $1 billion in trade happens on a daily basis at the u s Mexico border, according to the office, uh, of the United States trade representative us imported 339 point $8 billion in goods and services to Mexico. 2017 selling 276.2 billion. That’s a total of 616 billion making Mexico, the U s third largest trade partner. Mexico’s the top importer of American pork and corn, and the third largest importer of American soybeans. So if that border were to shut down, suddenly we have farmers who have crops and livestock that aren’t being sold that can’t be sold. They’re just sitting there. Farmers start losing money as they’ve already been doing thanks to Trump’s trade wars. Most of the u s supply of fresh fruits and vegetables comes from Mexico. So the prices of things like Avocados, limes, berries, and all the rest are going to skyrocket. And as report showed yesterday that everybody seemed to freak out about if he closes the border, the United States runs out of Avocados within the next three weeks, uh, 5 million jobs in the u s depend on us and Mexico trade.

Those jobs are going to be put at risk, uh, risk possibly put temporarily on hold. Those are going to create ripple effects through local communities where people suddenly have less money to spend. A United Sates purchases about a hundred billion dollars a year in car parts from Mexico that we import over here to build our cars here. So if that flows suddenly stops, so too could vehicle production, which could also put more jobs at risk, which could then lead to crashes and local economies and so on and so forth until either Trump reopens the border or these car manufacturers finding another source for their parts. Uh, we also have the border communities right down there who are dependent on people coming and going from that border, restaurants, salons, shops, whatever it is, those businesses are going to take a sudden and massive hit. The bottom line is that Trump has never actually considered any of the consequences to any of his actions.

And I know right now this is just him venting on Twitter, but based on what we have seen from this man, the decisions we have seen him make without any regard to how it’s going to going to affect the u s economy, I have no reason to doubt that he is actually considering this has economic advisers are idiots. Trump has already told us that if we shut down the border, it’s got to be good for the United States, economically speaking, it’s going to be a disaster. It is going to send us into a massive recession in the fastest time possible, but he doesn’t care. All he cares about his scoring a few more political points with his ever shrinking base.