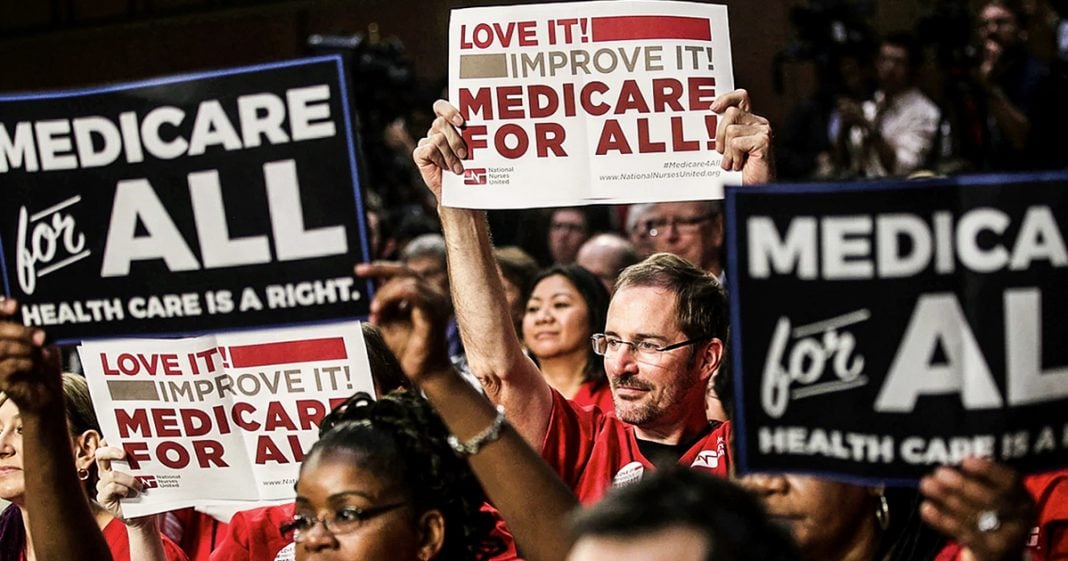 According to a new analysis by Think Progress, healthcare groups are ramping up their spending and giving to Democrats on key Congressional committees in order to prevent Medicare for All from becoming a reality. These groups could instead spend their money on creating better access to healthcare, but instead they are focusing on their own selfish desires while screwing over the working class. Ring of Fire’s Farron Cousins discusses this.

Healthcare groups are kind of freaking out right now. As more and more polls show that a majority of the American Public Republicans and Democrats alike want Medicare for All, they want a single payer healthcare system here in the United States. There are unequivocal about it. You’ve got more and more politicians in DC proposing legislation to actually implement such a policy, you know, something that would effectively and finally get rid of private health insurance companies who have been gouging us for decades. And obviously healthcare industries not too happy about that. And in addition to their usual millions of dollars going to Republicans each year, they’ve now started to target key Democrats on certain committees in the House of Representatives hoping that buying off a few kind of centrist corporate as Democrats is going to prevent Medicare for All from actually becoming a reality. Think progress just did a phenomenal right up on this.

Um, follow the link in the description of this video. Go look at the charts that they have of the Democrats and how much money they have taken and what committee they sit on and why it’s important. It is amazing. So Kudos to think progress for for doing this because it’s great, but here’s the thing. You have leading pharmaceutical insurance and hospital interests. They formed the Partnership for America’s healthcare future and the purpose of that group seems to only be let’s prevent Medicare for All from ever becoming a reality in the United States. And these are all the people who stand to lose the most because they liked the way things are now. They like being able to charge us $1,000 for a pill, 20 styles and dollars for two nights in the hospital. They want to be able to charge us $300 a paycheck for our insurance premiums and then not even cover anything until we’ve paid an additional $9,000 out of pocket.

Makes them a lot of money when they do stuff like that. But it also screws over Americans who are some of us dying because we can’t afford our medications. And that’s why this has to change. See these healthcare industries that have formed this new little front group, they understand that the writing is on the wall. They know they cannot hold this off forever. But by paying off a few key Democrats sitting on the ways and means committee energy and Commerce Committee, Budget Committee Rules Committee by targeting certain folks, they can either water down legislation or delay it as long as possible. Uh, last cycle they spent 1.2 million on these Democrats that these key targeted Democrats here. Uh, the most, any one of them received, which was frank Palone took in $56,000. Next up you had a $54,000. So they’ve given, you know, relatively small amounts, you know, in comparison to how much money we’ve seen other industries give to people over time.

But that was just in one single year and they’re going to be spending more, I mean, this is an industry, especially when you combine all three. They literally spend tens of millions, sometimes more than a hundred million in lobbying and direct campaign donations every single year, every year close to $100 million some years. Well over that, closer to $200 million. I imagine that’s what we’re going to see happen next year with the 2020 presidential election. Now, don’t you think it would be a better use of that money to just keep it in the bank, count that towards profit, and then lower your prices for consumers, it would essentially be a wash, right? Because instead of spending $100 million trying to pay off legislators and influence policy, just keep the money and lower your prices, then you don’t have to spend the money to lobby the people so they don’t come up with a better plan. You see how that works. But no, they would rather lose that money, that hundred million dollars lobbying and in direct campaign contributions then change how they are because they do make more money throwing 100 million away on politicians, but keeping the current system in place, but it’s unsustainable and they know it. They see what’s happening with the public, but they’ve got to hold out for just a few more years to pocket just a few more billion dollars before their entire industry gets offended. Because too many Americans will have died for a lack of healthcare and that’s on them.