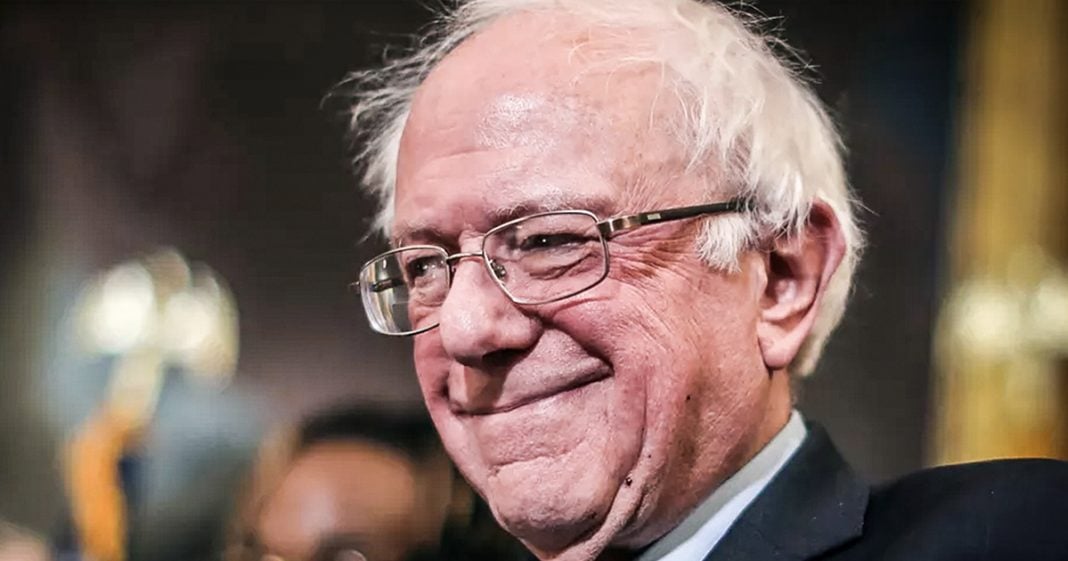 Both Republicans and centrist Democrats have united in their efforts to downplay the results of a recent poll showing that Bernie Sanders leads the rest of the Democratic candidates among youth voters by 11 points. Democrats see a cult of personality while Republicans say that young voters are just lazy and want Bernie’s free handouts. The truth is that young voters care about ISSUES, something both groups seem to have thrown by the wayside many years ago. Ring of Fire’s Farron Cousins discusses this.

So a poll came out yesterday showing that Bernie Sanders, among all other Democrats running for president in 2020 Bernie Sanders has a double digit lead among young voters here in the United States between the ages of 18 and 29 currently. And I know we’re still way out from the election and these numbers, 100% are going to change probably within a month, and they’re going to change repeatedly until the election. So it’s probably too early to even be talking about this. But to me the pole’s not important, but nonetheless, here are the numbers. Bernie Sanders, 31% next highest up is Joe Biden with 20% then you had better, we’ll work with 10% nobody else even cracks 5% but you do have 20% of young voters between 18 and 29 who said they don’t know yet. So yeah, these numbers are going to change, but it’s not the numbers that are important to this story here.

What’s important to me are the attacks coming on both Bernie Sanders and this entire friggin age group from not just Republicans, but plenty of disgusting centrist Democrats on social media. I was appalled to see what these people who call themselves liberals, they’re registered as Democrats. I was appalled to see what these idiots had to say about this group of voters. Let’s start with Republicans though, right? Because Republicans throughout the obvious ones, oh, well, this age group, 18 to 29, they’re just lazy. They like Bernie Sanders because he wants to give them free stuff. Where do they see that 75% of their paycheck is taken out in taxes? It’s an actual quote that I saw from a Republican on Twitter. Um, that’s not true whatsoever. But sure, go ahead with your free stuff. Socialists lies because the Democrats are the ones who really pissed me off here. They were out there saying, yeah, but this age group doesn’t vote, so they don’t matter.

Oh, you’ll get wiser as you get older. Throwing out that old condescending line of you don’t know good enough right now. Maybe when you’re my age, you’ll be a little bit smarter. Yeah. You can go straight to hell in the express lane by the way. And then you have the people saying, well, it’s just a cult of personality. Yeah. Ever Seen Bernie Sanders out there talking? Not exactly the kind of personality that really just attracts people like I would a fun guy. No, no, no. Beto O’rourke has a fun and uplifting and you know, pretty cool personality. If I had the chance to probably get a drink with one of them, probably gonna pick Beto just because he looks like we could get into some fun later doing whatever the hell we wanted to do. That’s a cult of personality. Now, I’ll admit there are plenty of the hardcore birdie folk who it is a cult of personality. It’s and gross. I’m with you on that. But to say that these young voters are just attracted to his personality shows that you, older people have aged out of politics. You’ve aged out of being. Even being able to objectively look at something to look at data and think that it doesn’t mean anything. That’s ridiculous. Here’s what it is. You have a generation 18 to 29 that has to go through active shooter drills. Baby boomers didn’t have to do that. Yeah, you had to go through your own as a nuclear bomb, duck and cover cause that’ll save you. These kids have had to actually watch the horrors that they prepared for unfold in their own classrooms. They have lived 100% of their lives. Knowing that climate change is real, that it was caused by human beings and that our elected officials aren’t doing a damn thing about it. Even though the signs of it, the effects of it are all around us throughout their entire lifetimes. They know that unlike you, boomers and middle aged Democrats, you’re not saddled with as much student loan debt as they are interest rates. When you took out your college loans were one to 2% they’re paying eight and 9% it’s not sustainable.

You came into a better job market than they have. You aren’t able to retire because you’ve put crappy politicians in place who’ve made it virtually impossible, so you’re hanging onto the good jobs were in the past. You would have retired. So now these people can’t get good jobs in the industries that they’ve trained for throughout college. Do you see what I’m saying? You screwed up this country and now you’re trying to tell these young voters to sit your ass down because you don’t know any better. It’ll, it’ll dawn on you when you get older. Okay? That’s about as condescending as humanly possible and proves that there are just a ms many Democrats as there are republicans who don’t seem to understand what’s actually going on in this country.