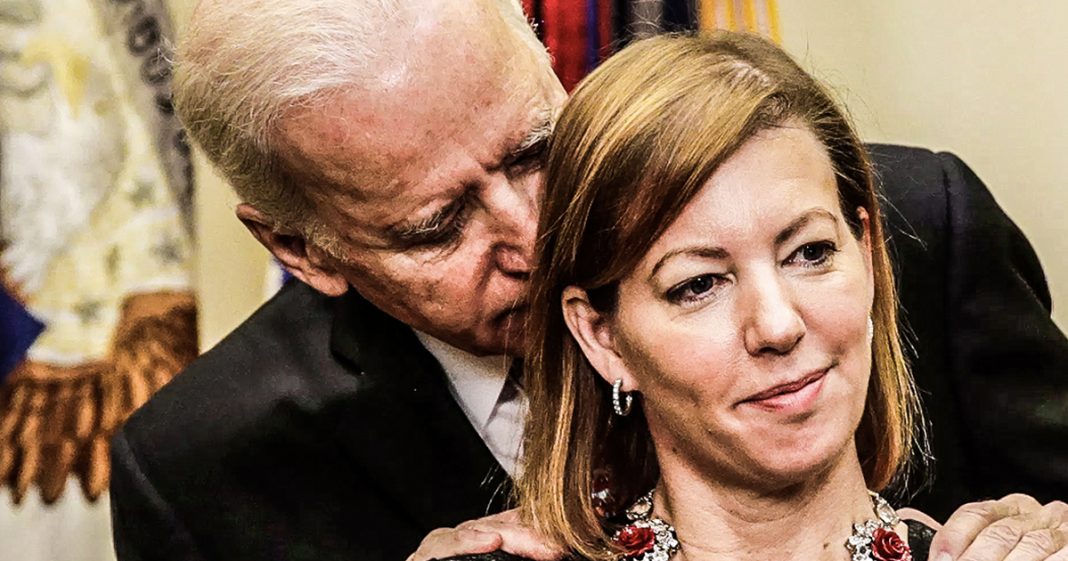 Joe Biden has a lot of problems with his past – his voting record, his attacks on Anita Hill – but recently his creepy behavior towards women is what has grasped the publics’ attention. Even if the incidents that have been described in the media were harmless gestures on behalf of Biden, and even if he wasn’t trying to be creepy or make these women uncomfortable, the truth is that they felt uncomfortable and did not want his touching, and that alone should disqualify him from the 2020 race. Ring of Fire’s Farron Cousins discusses this.

At the end of last week, the story of Lucy Flores was published, and if you’re not familiar with Lucy Flores, she was the Democratic nominee for lieutenant governor in the state of Nevada in 2014 her campaign was a little bit rocky. Democrats weren’t doing so well in the state and this according to what she wrote. Um, so the White House actually reached out to them and said, hey, Biden would love to come and do some campaigning down there with you for you. Let’s make it happen. She was excited and that’s when it happened. Biden gets down there, they’re about to do this rally. It was three days before the 2014 election, and I’m just going to read exactly what Lucy Flores wrote about Biden’s behavior while they were backstage waiting to go on stage. I felt him get closer to me from behind. He leaned further in an inhaled my hair. I was mortified. I thought to myself, I didn’t wash my hair today. And the vice president of the United States is smelling it and also what the actual fuck. Why is the vice president of the United States smelling my hair? He proceeded to pimp a plant, a big slow kiss on the back of my head. My brain couldn’t process what was happening. I was embarrassed. I was shocked. I was confused.

There’s a lot more to this and you can find her entire article that is in the link in the description of this video and I encourage everybody to read it because it seems like a lot of people who have been arguing back and forth about this for the last four days didn’t actually read her article. And to me this article, that part where she is expressing her feelings about what happened there that is disqualifying for Joe Biden.

I wasn’t a huge Biden supporter anyway, felt he was a little too centrist. You a little too corporatist, but this is it. This is disgusting behavior and what a lot of people have been arguing about online for the last few days is was there malicious intent with this, you know, was by Biden trying to make a sexual advance on her. Does it matter to me that part of the story’s irrelevant. My own feelings about what Biden was attempting to do are irrelevant and I want to say that again. My feelings are irrelevant. Your feelings are irrelevant in this particular story. You know whose feelings matter in this story, Lucy Flores, and as we’ve seen over the last few days, all of the other women who just felt a little creeped out, uncomfortable, shocked, embarrassed,

Okay. Whether he was going to take it further or not, doesn’t matter. He made these women feel this way in front of other people. This was not appropriate behavior. That’s it. That’s it. That is the discussion. If you weren’t the one in that position to feel those feelings, you don’t get to say how your feelings about Biden influence you on this particular issue. That’s the bottom line. That’s it. Your feelings are irrelevant. Go through what Lucy Flores did. Go through what any woman in this country has to go through the deals with crap like this. Your feelings about the person who did it don’t matter.

What matters is how these women were made to feel made, to feel by these men and Biden’s know better. This is disqualifying. This is something that absolutely would and should derail a presidential campaign. And yes, I know he’s running against Donald Trump, but what’s going to happen? And Biden suddenly does say, screw it, I’m going to run. Then the Democrats now have to defend his disgusting behavior and somehow say that we’ll what Biden did isn’t as bad as what Trump did. You think voters give a damn about that because they don’t, all they’re going to see is to predators up on stage debating each other. You think that’s a smart move? No, it’s not. And I think even the most centrist corporate is Democrat would agree with that. Biden’s time is up. Biden’s time has past Joe Biden love him or hate him like his politics or dislike them, whatever. None of that matters right now. What matters is what this man was doing and the way he was making these women feel and that and that alone disqualifies him from running for president or it should disqualify him. He still got a lot of defenders out there for some reason, but those are people who can’t empathize with the way those women were forced to feel at the hands of Joe Biden.