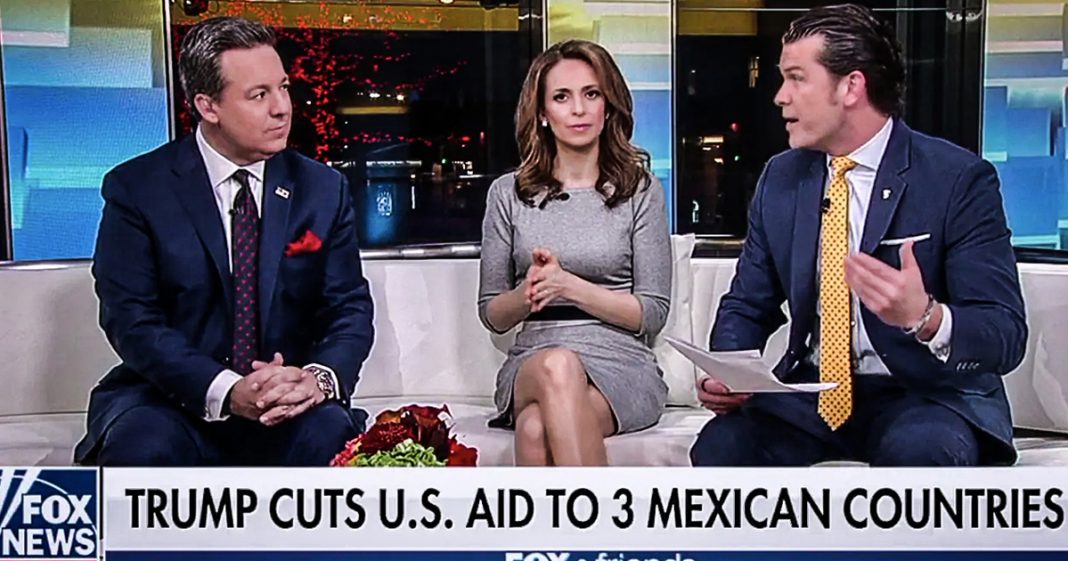 Over the weekend, Fox News wanted to let their viewers know that Trump was cutting aid to 3 Central American countries, but for the life of them they couldn’t figure out how to phrase that statement. The chyron on the bottom of the screen told viewers that aid was being cut by Donald Trump to “Three Mexican Countries,” a glaring indictment of the bias that the network has come to display. Ring of Fire’s Farron Cousins discusses this.

Over the weekend. Fox News found themselves the laughing stock of the entire Internet when they had a banner on the bottom of their screen for their Fox and friends. Weekend morning show that read “Trump cuts aid to 3 Mexican countries”, 3 Mexican countries. Now for those following along at home, there’s only one Mexican country and that happens to be Mexico. The other countries down there just there, they’re Central America is, is what we call that. Some of them, if you go a little further, a further down south, that’s South America, but apparently nobody had fox news bothered to check a map and even worse, nobody had Fox News bothered to figure out that Mexican doesn’t refer to every single person south of the US border. Now, Fox News did come out later in the day and apologized for this. Oops. Yeah, we made a mistake. You know, obviously if they’re not all Mexican countries, it’s Honduras, Guatemala, and El Salvador that Trump is cutting aid for, but the damage was done.

But here’s the thing, that little Chi, Ron, at the bottom of the screen, it said Trump cuts aid aid to three Mexican countries that had to go through multiple people. It’s not just one rogue staffer at Fox News who typed that out and put it on the screen and nobody else saw it. No, you have producers, you have editors, you have a director. Everybody in that control room at Fox News saw that. They saw it at any point, they could have either thrown something else up while they re type that graphic, but no, they just left it there. Why? Because Fox News knew what they were doing and I think that’s the part that people miss. You see to the hardcore MAGA hat wearing crowd here in the United States, it’s all Mexico south of the border and Oh, Mexicans are bad. They didn’t need to differentiate. They didn’t need to say, I’ll Salvador, Honduras, Guatemala.

They only had to say Mexico because any brown skin, individual living south of the United States is Mexican. Doesn’t matter where you come from, your Mexican because they know that their audience, because of Donald Trump, hates Mexicans, so why bother with specifics when you can just lump them all in, even if it makes you look like a complete moron that doesn’t know how to read a map. This wasn’t a blunder. This was Fox News trying to show on the screen that they’re all Mexico’s down there. All of them. Oh, the people from any individual country, they’re all Mexicans and they’re all trying to come to the United States so they take your job or worse. That’s what Fox News pedals in. This wasn’t a simple mistake. This wasn’t just some idiot staffer who didn’t know what they were doing. This went through too many eyeballs and too many people for this have been to an a for this to have been an oops kind of moment.

They all saw it. They thought nothing of it because they knew their audience would be okay with it. That’s the danger of Fox News. I do not believe this was just a quick little blender. It may have been an accident at first, but then they probably realize the power of that because again, that audience, everything south of Texas is Mexico and every person south of Texas is a Mexican and Mexicans are bad. So why worry yourself with the specifics of each individual country when you can just paint them all with one broad brush and just tell us that blanketly, every one of them is a bad Mexican. That is what Fox News was doing this weekend.