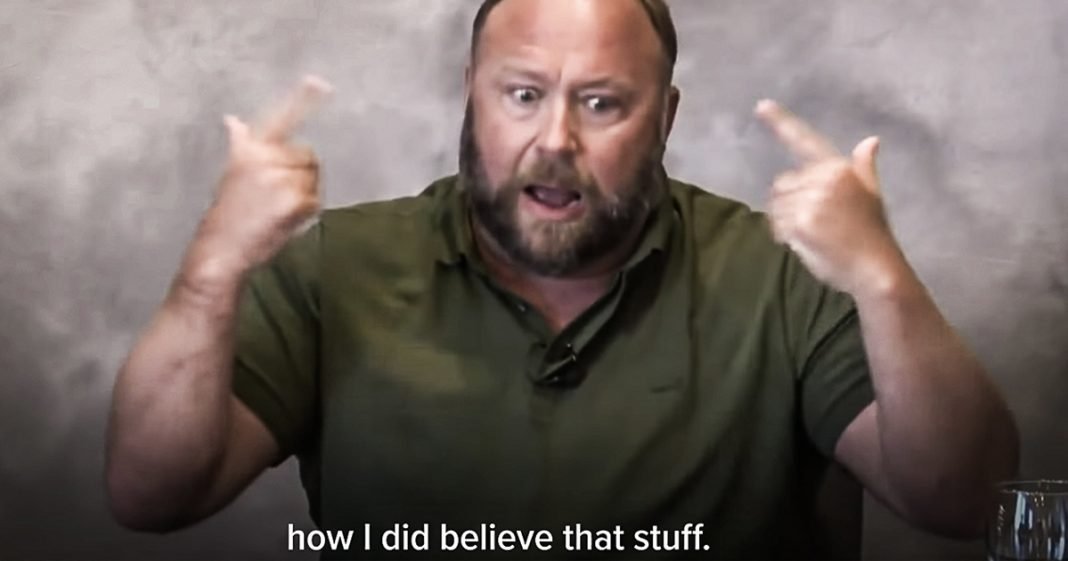 The deposition videos of Alex Jones have been released to the public, and the conspiracy theorist is now claiming that he suffered from a form of psychosis that made him believe that some mass shootings were actually hoaxes. This defense isn’t going to get him out of trouble, but it could severely hurt his broadcasting career by undermining everything he has to say. Ring of Fire’s Farron Cousins discusses this.

At the end of last week, video clips were released from Alex Jones’ depositions for the lawsuit that he’s facing from the families of the victims of the Sandy Hook massacre. And in the video, in these depositions given under oath, Alex Jones claims that he was suffering from some form of psychosis for a few years. And that’s why he pedaled these conspiracy theories. And he actually went as far as to say that he does not believe today that Sandy Hook was staged. He is totally, fully 100% admitting yes, it did happen. But few years ago I was, I guess having a psychotic breakdown and believed that every thing, not just Sandy Hook, but everything was a lie, and that I needed to find the truth. Uh, here’s an exact quote from this deposition, and I myself have almost had like a form of psychosis back in the past where I basically thought everything was staged. Even though I’ve now learned a lot of times things aren’t staged.

So I think as a pundit, someone giving an opinion that you know, my opinions have been wrong, but they were never wrong consciously to hurt people. No, they were just wrong consciously to mislead people and drive up your ratings because you never thought in your wildest dreams that you’d ever have to go under oath to defend the stupid things that you say on the air. But you did and now you’re trying to backpedal. Let me go ahead and throw this out there. Alex Jones, he is the one who is the actor here. I firmly do not believe that Alex Jones actually believes the crazy things that he says on air, and in fact, his own lawyer admitted that he doesn’t, his own lawyer in his custody hearing a year or so ago said that this is all staged. The only thing staged an Alex Jones, his world is Alex Jones actual show.

He doesn’t believe this stuff. He’s admitting here that, oh yeah, yeah, I guess I was a little psychotic at the time. It’s all an act folks. It’s all an act now. It’s an act that has real world consequences. It’s an act that has gotten people death threats. It’s an act that has gotten a small portion of this country all drummed up with hate and conspiracies, but it is an act nonetheless. But Jones pulls it off beautifully and that’s what makes him so dangerous and at least now with these lawsuits against him, he’s finally being held accountable for this. Him being deep platform did not change how dangerous his rhetoric is. It did not change his reach. It really didn’t, but his audience has to understand this, given the opportunity when his own back is the one against the wall, he’s going to throw you under the bus because that’s what he’s doing here.

That’s what he did. And the the child custody depositions, they said, oh, it’s just all made up. It’s all make believe he doesn’t believe this stuff. He’s not crazy. Oh, why am I peddling conspiracy theories? Oh, I, I was having a form of psychosis. I don’t actually believe these things, but the audience does. And this guy that you idolize this, this truth seeker, yeah, he threw you under the bus and said, nope. Even, I don’t believe these crazy things. Think about that. Next time you tune into his show and just remember that you are being played by an actor. This guy is pretending to believe these nonsensical, crazy things to exploit your fears and concerns about this country and turn them into a profit. And again, he has done a phenomenal job with that. But keep in mind, he is not telling you the truth and he knows that he is not telling you the truth. So if I were you, I wouldn’t even bother to give this man the time of day. His entire little media empire is crashing down and this lawsuit, along with the others that he’s had to give depositions in, has exposed what a corrupt and weak fraud Alex Jones truly is.