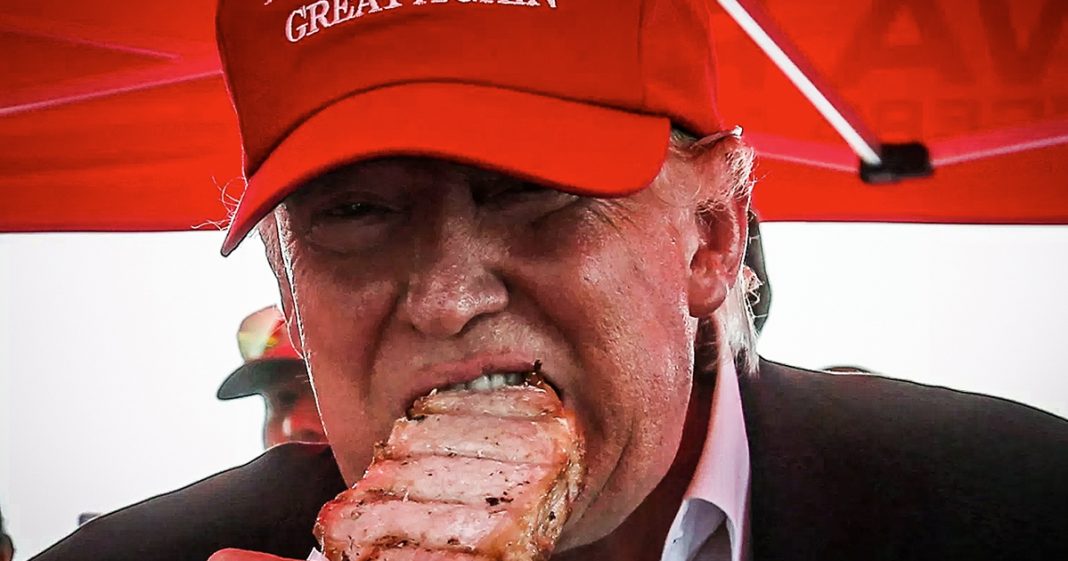 Donald Trump has only been President for 2 years, but aides already say that the job has tired him out tremendously. In fact, they say that he’s so tired all the time that he’s been DECLINING to do rallies, which were a big part of his election and the 2018 midterms. If the President is this tired right now, just imagine how bad he’ll be 15 months from now when we’re in the final legs of the 2020 election. Ring of Fire’s Farron Cousins discusses this.

Donald Trump is old, fat, and tired. Those aren’t my words. Those are actually the words of his aides who have been speaking to reporters recently who said that the president’s advanced age, 72 years old, uh, and just his general being tired a lot are really starting to concern them about his chances for election in 2020 now I started by saying those weren’t my words, the fat part was my word, but come on. We’ve seen pictures of him, he got admitted, guys overweight. I’m willing to admit I’m overweight too, so hey, it is what it is. But nonetheless, Donald Trump does not have the stamina. He does not have the physical ability according to his aides to go out there and do the kind of hardcore heavy hitting campaigning that he did in both 2016 and even just six months ago in 2018 according to this new report by The New York Times.

And this was actually a small part buried in that report as raw story pointed out. But it seems to be the biggest one. He’s not doing anything. Yes, I know he did a rally late last week after his, you know, Mueller report victory or alleged victory, I should say what he’s calling a victory. But nonetheless he did the one rally. But as the aides have told reporters, he’s actually been declining a lot of rallies recently and they’re concerned because the ones he is saying no to, the idea is that he’s turning down all happened to be out there in the Midwest. The states that help to give Trump enough electoral votes to become president. He doesn’t want to do it. He doesn’t want to go out to the Midwest according to the aides and do a fundraising drive. He doesn’t want to go out there and do any rallies and he sure as hell refuses to do two rallies on the same day.

Something that kind of became the hallmark of the 2018 midterms. And again, they’re blaming this on his advanced age. Now think about it this way, the last three guys who held the White House, they went in, you know, fairly youthful, optimistic, happy looking at all three of them. Clinton Bush and Obama left looking like they got hit by a truck there once youthful, colorful hair, now grade wrinkles all over their faces where there were no wrinkles before. This job of being president of the United States and they’ve actually been plenty of studies on this age is you beyond belief. You literally have the stress of the world on your shoulders and even a bad president like Donald Trump who doesn’t work most of the time, still does have that pressure and for a guy that lies about how good his health is, that kind of stress on that kind of body, on that kind of dude.

Yeah, that’s really good to take a physical toll on him, which is why he’s doing more executive time. The bottom line is that the aides don’t think this man can physically go out there and campaign for the 2020 presidential election. And if that is the case, that is going to cost Donald Trump dearly because the more he sits in the White House are down there at Mara Lago and just tweets out all day, the more most of the public starts to get turned off. But when he goes out and does the rallies, it’s a few tips here and there and the areas where he does the rally, you take those away from him and that guy stands absolutely zero chance of winning a second term in the White House.