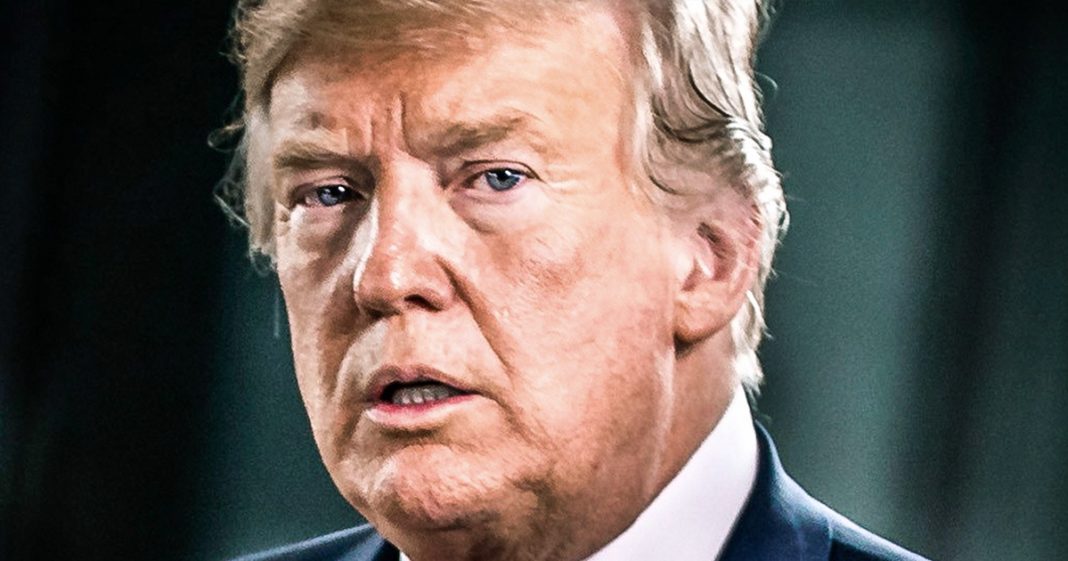 According to new documents and reports, Donald Trump has apparently (allegedly) been committing financial fraud for years by lying to lenders about his assets. This is 100% illegal, and if it actually happened, these would easily be impeachable and prosecutable offenses that could end Trump’s presidency. And since he’s so secretive about his financial status, Democrats in the House are now working with the banks who leant him the money to find out what’s really happening. Ring of Fire’s Farron Cousins explains what’s going on.

So obviously we’ve had a week now since William Barr sent his little four page summary of the Mueller report. Everybody on one side says, it says this, everybody on the other side says there’s a big cover up we won’t know until, and if we get that final report from Mueller fully released to the public shall we can all see for ourselves. But nonetheless, you’ve actually had plenty of Democrats this week talking about impeachment and it’s impeachment based on the Mueller. Report it to that. I actually have to say stop. Stop right there cause we don’t even need the Mueller report.

If your goal is impeachment, if your goal is to get Donald Trump out of office by proving that he committed crimes, you’re looking in the wrong place. The place you need to be looking for 100% concrete evidence is that his bank records. And in fact there are Democrats in the House of Representatives right now who are focused on that, on the financial services committee who have been working with Deutsche Bank, a bank that we know Donald Trump lied to in order to secure a loan. They got documents from Deutsche Bank this rate week regarding those loans they gave to Donald Trump. They are already on it. Meanwhile, you have the other half out here screaming. We’ve got an mph on the Mueller report. Slow your roll guys. We need the release of the Mueller report 100% but to go ahead and say we should start impeachment on this. No, I disagree.

But over here in the financial services committee, the work they’re doing with these banks that Donald Trump lied to, to secure loans, essentially committed bank fraud. That’s the route. Those crimes are a hell of a lot easier to prove because there is documentation of them. Then anything you’d find in the Mueller report, cause that could be argued one way or another regardless of what’s in the port in this bank fraud. No, you can’t argue that. And earlier this week the Washington Post put out a phenomenal new report that actually detailed even more financial fraud from Donald Trump. Then we had already known about from the Deutsche Bank story that came out a few weeks ago, and here it is a Trump’s financial statement for 2001 said he had 55 home lots to sell at his golf course in southern California. Those lots would sell for 3 million or more of the statement said, but Trump only had 31 lots ready for sale at the course according to city records, he claimed credit for 24 lots and at least 72 million in future revenue that he didn’t have.

He lied to investors to get them to put money in his project. That’s illegal. You can’t do that. Another one here, he also claimed his Virginia vineyard had 2000 acres when it really has about 1200 now, that may seem like a small lie lying about 800 acres, but if you told that lie to investors to get them to put money in your project, you’re going to prison. If you told that lie to a bank in order to secure funding for your project, you would also be going to prison in another big lie to investors and bankers. He claimed that Trump tower had 68 stories when it only has 58 I, this is who are the guy lived. And he still thought it was cool to lie about how many stories the building actually had. The entire Washington Post articles available in the link in the description of this video.

Speaker 1: (03:43)
And I encourage everybody to go look at it cause this is just a small snack snapshot of what I’ve given you right here. There are more, and these are documented. The records are there. And more importantly, the banks are now working with the Democrats turning over their documents to the House of Representatives. That’s not gonna end well for Trump. And while he’s still taking his big victory lap off that Mueller Report Summary by William Barr, what he needs to be doing is going back through his head and thinking about all the lies he’s told to banks over the last few decades. Because the Democrats in the House of Representatives who are serious about accountability, that’s what they’re focused on. They’re not doing this media side show about the Mueller report. They’re sitting there working on real issues where Trump possibly defrauded investors, committed bank fraud, and a whole host of other easily prosecutable crimes crimes that by the way, he wouldn’t be able to pardon himself for doing so. I’m going to go ahead and say that these Democrats over here are the ones who are taking the threat of Donald Trump far more serious than the ones who are just trying to grab a little bit of media spotlight off of the Mueller report that still nobody has even seen.