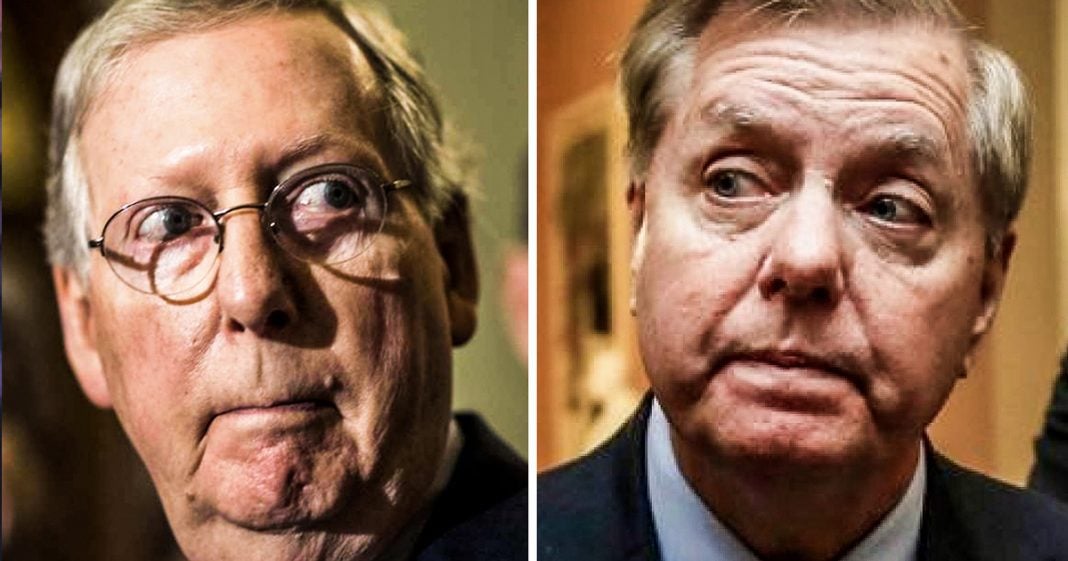 Believe it or not, the Republican Party has a bigger problem heading into the 2020 elections than Donald Trump. The fact that the Party has not had a fresh idea since 1980 has led most American voters to trust Democrats more on nearly every issue across the board, and short of a miraculous plan to help out the middle class, Republicans in the House and Senate are poised to suffer major losses because they don’t know what they’re doing. Ring of Fire’s Farron Cousins discusses this.

You know, it’s easy to think that Donald Trump would be the republican party’s biggest liability heading into the 2020 election. I mean, the guy is struggling to get an approval rating up to 50% I know he tweeted out Friday morning that it was at 50% but that’s literally based on one single pole from Rassmussen who always is a little bit pro Republican. So their numbers are a little bit inflated. So his real, his aggregate approval rating is still below 50% but George W. Bush won reelection with an approval rating slightly under 50% and it’s the incumbent bounce. So Donald Trump is already in a fairly decent position heading into 2020 yes. Most people don’t like him. Most people still, according the latest polls, think that collusion happened. They don’t like his policies. They don’t like his tax cuts. They don’t like his wall, but he’s still in decent shape.

He is not the Republican Party’s biggest liability ahead of the 2020 election. Their biggest problem, the Republican’s biggest problem is that they don’t have any ideas. And yes, I know before you say it, I know I have said this many times over the last few months and guess what? I am going to continue saying it until probably I stopped doing this all together because the Republican Party has no ideas. But the reason I’m bringing this up today is because earlier this past week, Washington Post’s conservative columnist, Jennifer Rubin finally also admitted this, you know, she has been a huge critic of Donald Trump and the direction of the Republican Party. That’s true, but she also agrees that Trump’s not their biggest liability in 2020 it’s the fact that they don’t have any ideas and the few things they tried to do, which is really two things, a, a repeal and replace, which the public got furious about and cutting taxes for the wealthy.

Those were horrible moves. The public hates them. Both the public is pissed off because people are a middle class and working class people there, they’re paying more in taxes while the wealthy elite get to write off the entire cost of a private jet. So yeah, the scam is up. We see you for what you are and you are a party with no ideas to take it back. As I so often love to do here, since 1980 the Republican party has had two ideas, cut regulations and cut taxes for the wealthy. You show me any point since 1980 where they have come up with a specific policy proposal that didn’t involve deregulation or cutting taxes. That’s all they’ve got. They are one trick ponies and at this point everybody in this country knows what that trick is. So here’s why it matters. Heading into 2020 you have more Senate Republicans up for reelection.

Then you do Senate Democrats, essentially control of the Senate is up for reelection in 2020 control of the house has always up for reelection, but with Democrats with their 40 plus a seed advantage, they’re probably in pretty good shape to hold onto the house. Hopefully they can add more seats, but the Senate man with some of these senators screwing up left and right, drawn the ire of the American public. You’re going to see Senate races, much like you did with Cruz and Beto O’Rourke, where you have all this outside money flowing into the Democratic challenger, you’re going to have huge support for democratic challengers for people like Mitch McConnell and Lindsey Graham because people want them gone. That’s not going to bode well for Republicans who have to go out there and defend themselves, not only against the big money attacks from wealthy liberals, but also in front of their actual constituents.

They’re going to have town halls. Maybe they’ll have debates and I hope everyone in any of those audiences, every time one of these things happens, has the courage to stand up, raise your hand and say, excuse me, do you have any ideas that don’t involve deregulation or tax cuts? Because if not, everybody in the audience is wasting their time and you have no reason to stay in Washington DC. Some of these people have been in there for 20 upwards of 30 years, and throughout their entire tenure, the only thing they’ve been able to do is cut taxes and deregulate. And if that’s your idea of governance, if that’s what you think is best for this country, then clearly you don’t deserve to be in Washington DC anymore. So I guess the moral of the story is this, Republicans are in bad shape heading into 2020 Trump himself may not be, Trump could easily win reelection, but if the Democrats lose the Senate, uh, excuse me, Republicans lose the Senate and they continue to lose the house that’s gonna make for one very interesting, lame duck session for Donald Trump’s second term. Should it happen.