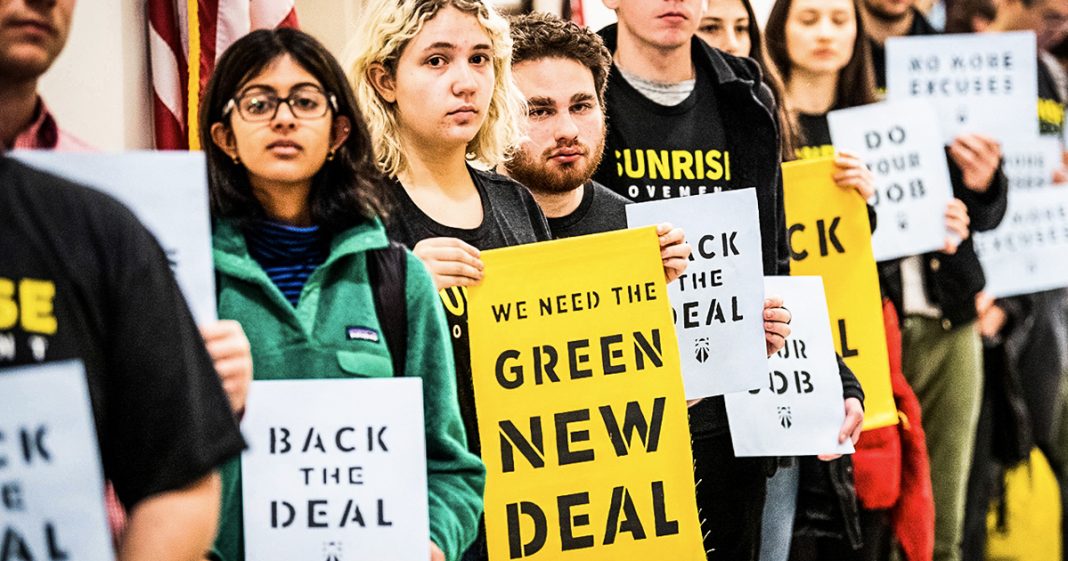 Democrats in Washington, D.C. appear ready to admit defeat on The Green New Deal, at least in theory and according to some seriously misleading headlines in the media. What is actually happening is that Democrats are going to take the individual ideas from the plan and package them as their own unique bills that stand a better chance of passage. This is a good strategy, though it may not do everything that we need it to, as Ring of Fire’s Farron Cousins explains.

You know, there’s some days when I really just absolutely with every fiber of my being hate the media. And here’s why. Uh, this morning there’s all kinds of headlines out there, uh, Democrats to move on from Green New Deal. Democrats abandoned the Green New Deal. All of these big flashy grabbing headlines showing you, telling you that Democrats were just finished with the Green New Deal and every one of them was a lie, at least in part because if you clicked on any of the stories, have you started reading them? You’d find by the second or third paragraph they were talking about the new plan that the Democrats have because here it is. What the Democrats are doing right now is that they’ve realized that the Green New Deal, which was not technically a set of policy proposals, they’re going to go ahead and take it one step further, not abandoning it, but instead they’re going to start breaking it into pieces, take each one of those pieces and crafted into a bill and get those individual bills passed.

Rather than trying to package the entire thing as one massive set of policy proposals and changes, which would stand a much smaller chance of ever becoming a law. They’re going the smarter route this time, and I know at the time we all thought the Green New Deal, this big package of things would be the best way to handle it and to be honest it would, but unfortunately, given the partisan nature in Washington DC and the fact that science itself has become partisan, we have to break it up. Now. That likely means that some pieces of the Green New Deal will not see the light of day, which will make the overall effectiveness of it a little bit lower. But this is a situation where we have to take what we can get for now. Once we get the science deniers and the fossil fuel money at a DC, then we can make some real changes.

But the Democrats are taking the correct route here. We know that there are some proposals and the Green New Deal that you’re not going to get any republicans to sign off on, but we also know there’s other proposals that you damn sure could get Republicans to sign on to how you could probably even get Trump himself to sign it and that’s the route they’re going to go because they know they’ve got to do something. They can’t just sit on this package called the Green New Deal for two more years, for four more years, don’t have that kind of time. Folks, we don’t. And so that’s why what they’re doing right now is so important. They’re not giving up, they’re not abandoning it. I guess in a sense they are moving on in the f in the sense that they’re actually moving forward with it. They’re just breaking it into smaller pieces so that it’s easier to pass. But don’t let the media tell you that because they want to tell you the Democrats are given up. Democrats are quitting again, Democrats are caving in. We have seen plenty of that over the last 20 years, but what they’re doing with the Green New Deal right now, this isn’t moving on. This isn’t abandoning it. This is taking it to the next step where they can finally implement it.