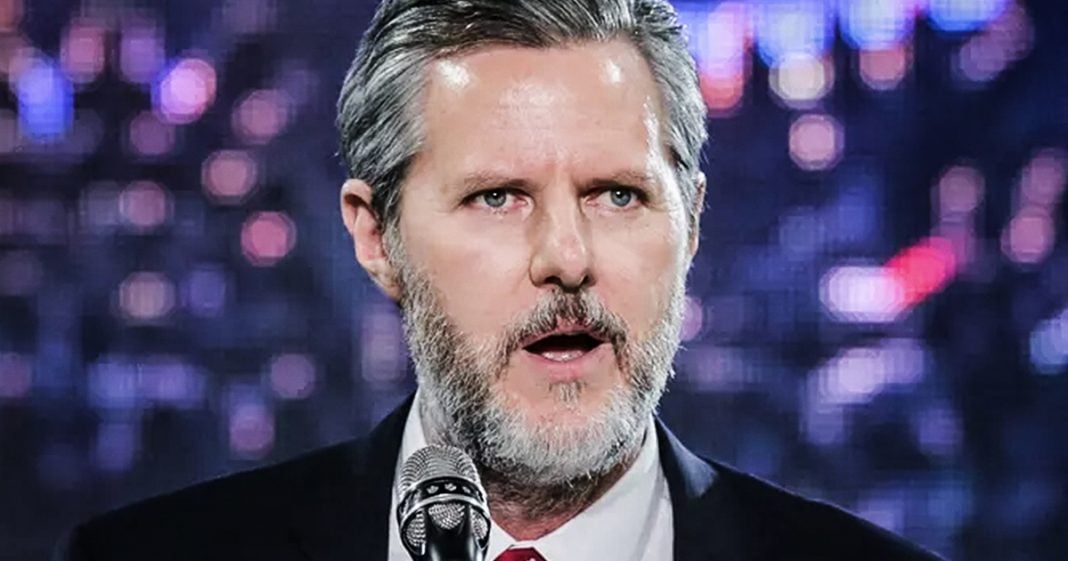 Religious fundamentalist college Liberty University has a subsidiary named Liberty Aviation that has a lucrative government contract to provide jet fuel to the US government. The timing of the signing of the contract is what has drawn the most scrutiny, but the bigger question that we need to be asking is why this “religious” college is in the jet fuel business in the first place. Ring of Fire’s Farron Cousins discusses this.

Yesterday. The daily beast reported a bombshell that the Pentagon has a 800 plus thousand dollar contract with a group called freedom aviation to purchase jet fuel freedom aviation just happens to be wholly owned by Liberty University, the fundamental religious college that is currently being run by Jerry Falwell Jr and ardent Trump supporter. Now, this contract was actually signed in May, 2017 just a few months after Donald Trump took office during the campaign going back to 2016 Falwell Jr endorsed Donald Trump. Following that, Donald Trump spent at least $19,000 flying around with Falwell Jr using his plates using freedom aviation and then suddenly just a few months after coming in, they start buying jet fuel from this group owned again by a Christian college. Now, a lot of the focus right now is on this particular contract because it’s pretty obvious why this group got the contract to begin with. They’re Trump supporters and they got a favor in return for endorsing him.

It’s really as simple as that, and while it is shady, it’s technically not illegal, but to me the bigger question that’s emerged from this entire story is why in God’s name, quite literally what a religious college technically be in the jet fuel business. Why? Why is nobody questioning this? This is the part that doesn’t make any sense. Not to mention the fact that since Liberty University, the entity owns freedom aviation, the entity that would mean that liberty university is being funded by contracts from the Pentagon at least partially. Now that’s the part where you’re going to run into some legal issues, you know, with your tax exempt status and things like that, and that’s what needs to be investigated here. Yeah, it’s pretty crappy that they gave the contract to one of Trump’s buddies. However, that’s kind of unfortunately how politics work. You’d be a good boy.

You play along, you give some money when you can, and the government’s going to return the favor. Doesn’t matter if it’s a Democrat or Republican in there, they all do it. It’s gross. It’s disgusting. It’s shady, but unfortunately it’s not technically illegal. However, the Pentagon essentially funneling money through this aviation group that owns, I think, what, four planes, giving them nearly a million dollars for jet fuel when there are plenty of other places they could be purchasing jet fuel from. Instead, it’s going to this group where the then goes to a religious college that enjoys a lot of tax exemptions. Yeah. That’s the kind of thing that needs to be investigated. And furthermore, I think everybody who attends Liberty University needs to understand that the little side hustle your college has going on right now is selling jet fuel to the Pentagon. Something about this story doesn’t smell quite right and hopefully as the weeks and months go on, somebody does a little bit more digging into this and hopefully congress decides maybe this is the kind of thing we should be investigating because something’s not right with this story and Liberty University, if they’re doing some kind of little deal and under the table taking money from the Pentagon, but then not getting taxed on it cause they’re technically a religious institution, then yeah, somebody’s going to get in a lot of trouble for that.