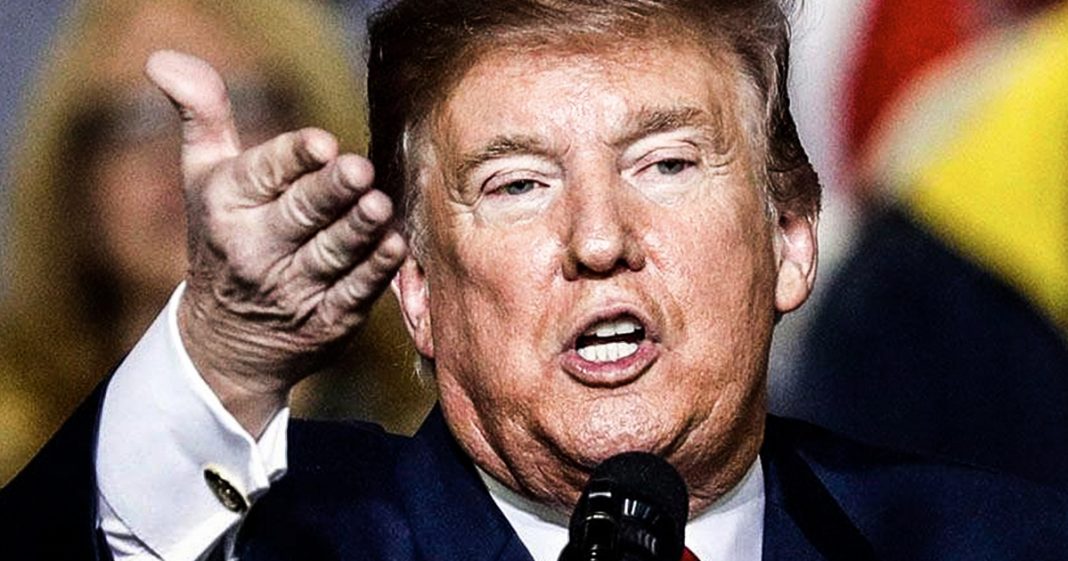 In an interview with Sean Hannity on Fox News this week, Donald Trump lashed out at the FBI and all those who were part of the investigation into his campaign and administration. He claims that those who launched the investigation committed “treason,” and said that he “hopes” they don’t get away with it. Is he planning a retaliatory attack on them, or is he just blowing smoke? Ring of Fire’s Farron Cousins discusses this.

Donald Trump told Sean Hannity on Fox News earlier this week that maybe it’s time for a little retribution for the folks at the Department of Justice, particularly within the FBI who started the entire Mueller investigation to begin with. According to the interview that he gave with Sean Hannity, first and foremost, Trump feels like he has been exonerated. You know that little four page Cliff’s Notes version of the Mueller report from William Barr totally eased his mind and now Trump has going on the attack. He went as far as to say that those in the FBI who originally raised concerns about Donald Trump, he says they committed treason. In fact, he said they wanted to do a subversion. It was treason. It was really treason. That is the exact quote. The president of the United States is accusing people inside the FBI of committing treason. Let that sink in for a wool for a first second here cause that’s, that’s a big claim is a big claim buddy.

Yeah, and I know the trees and word has been thrown at Donald Trump for a very long time. It is not a word that we threw out there at him. Never went that far with it. But here’s the thing. Nobody in the FBI, sorry, folks committed treason. The FBI did not start this investigation based on the information in the Steele dossier. That’s just a fact. Prior to receiving the dossier, which again was handed to him by a Republican, um, and originally funded by Republicans at the Washington Free Beacon. They had already raised concerns. They had already had a little bit to go on, not a ton, but to continue to go out there and say that it was started because of the Steele dossier is a lie. We still technically don’t even know what the Mueller investigation found. So while Donald Trump is out there taken his victory lap, and now that he’s, you know, at the finish line of that victory lap, now he’s saying, we’re going to come for you. You treasonous a scum dirty cops. It’s what he calls them. The dirty cops and the FBI were coming for you. We’re going to hold you accountable. We’re going to make sure this doesn’t happen again to another sitting president. You know this is a task for the DOJ to go in there and find these people. These are all things that he said, by the way in this interview.

Okay, but we still don’t know what’s in the report. Okay. Victory Lap maybe a little bit premature. You all these people gloating that we got it right and you got it wrong. Might be a little premature. All those people who are still out there saying no collusion still definitely happen. May also be premature. We can’t say one way or another. Which one is correct because nobody’s seen the report except Donald Trump’s closest friends and at this point it may not even be relevant. Right. We’ve seen that the polls haven’t necessarily moved. It hasn’t changed anybody’s opinion on what did or did not happen. We need to see the full report because there does need to be full disclosure. That way we can finally either put this to rest or move forward with charges if they’re necessary specifically on obstruction of justice because that Mahler report may hold the missing key. It may show intent, and if it does, then yes, that would be obstruction of justice.

If it does not show intent, then you really couldn’t actually move forward with those charges. But nonetheless, lacking a full report. There’s not much we can do except for the fact that Donald Trump is currently lying still about what happened at the FBI, and now he’s threatening to go in there guns blazing and just get rid of people left and right. Leaving only those who are loyal to him. The FBI has already a dangerous organization. You know, they’ve done some horrible things since their inception, but just imagine how much horrible, uh, worse, I guess it would be if it was only packed with people who were loyal supporters of Donald Trump. That’s not the kind of thought or vision for this country that should leave anyone with a warm feeling inside.