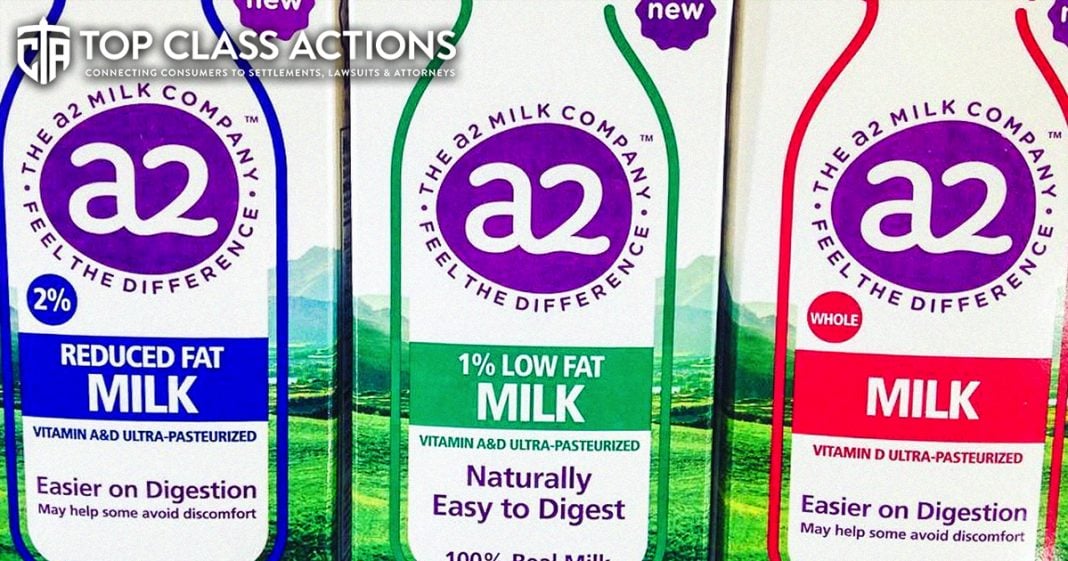 In a class action lawsuit, a customer challenges claims made about the digestive advantages of drinking a2 Milk. The plaintiff argues that The a2 Milk Company makes digestive claims that they can’t back up, misleading customers about the actual advantages of their milk in an effort to boost sales. The plaintiff says that the front label bears the brand name “a2” and the phrases “Feel the Difference,” “Easier on Digestion,” and “Naturally Easy to Digest.” Ring of Fire’s Farron Cousins discusses this with Scott Hardy from Top Class Actions.

Farron Cousins:                  By now, I’m sure most people have seen the commercials for this, a2 Milk, which is allegedly a milk that is easier for people who are somewhat but maybe not completely lactose intolerant. It’s supposed to be a little bit easier for them to digest. But according to a new class action lawsuit, the company really doesn’t have enough information to be able to back up those claims.

Joining me now to talk about this is Scott Hardy from Top Class Actions. So Scott lay this one out for us. This case, it’s a little bit confusing. There is a lot of science that goes along with this. But ultimately the law, the lawsuit is trying to tell us that aa2 Milk , they really can’t back up any of their claims with credible science.

Scott Hardy:                          Right. Yeah, this one is definitely confusing because you have a lot of people that don’t drink milk, maybe lactose intolerant, they have problems digesting it. So this a2 Milk, as you said, is, is heavily marketed as easier to digest. It’s supposed to just be easier to handle for the average person. And that’s because the way they advertise it, they say that most cow’s milk contains two types of protein, a1 and a2, but a2 Milk only includes the a2 proteins, which by their theory will make it easier to digest.

Now the, the, there are allegedly 12 types of casein proteins and the most common of those 12 are a1 and a2. Now the company is stating that the BCM-7 peptide is what causes digestive issues and that’s what’s causing digestive issues for those who have problems with dairy. And by only having the a2 protein in their milk, hey, magically it’s easier to digest. Not magically but hey, it’s just the a2 protein.

But the, the difficulty behind, behind the science for this is that the studies that they have supporting them and their claims, they happened a lot in a different class action we covered, which actually was one of the reasons I started this company. Where they have these studies to go ahead and show the effectiveness of their product and how it’s better for people. But the clinical studies that were created were wholly created by this company and at different businesses that were created just to run these studies.

So these, these studies aren’t very independent because it’s not like you’re going to a clinic that runs hundreds of studies a year and you’re saying run this one study. No, you’re going to a clinic that might run one study a year or however many studies you need run. And then that place might cease to exist afterwards, which really makes it hard to get a solid gauge on what is actually the science behind it and what are simply the marketing dollars to get a study that proves the point that you want proven.

Farron Cousins:                  Wow, that’s, that’s actually really interesting. So, so we’re dealing with this company and they want to market a product by saying, out of all the, the 12 proteins in milk, the first one, a1 is what’s bad for you because of the, the peptide chain that it creates. So this is the bad one. We’ve taken out the bad one and to back it up, we actually created this little group that did a study that proves exactly what we needed them to prove.

Now that’s pretty interesting and it also really takes a lot of their credibility away. If this is the way that this, you know, the events transpired. If that is where these studies came from, you know, you obviously you’re starting with this confirmation bias. We need to prove this thing instead of let’s find out which protein is what and which one is causing issues for consumers. So, you know, you’ve got a lot of different moving parts here.

You know, a ton of science involved in this, ton of studies involved in this and it looks like they came from these little study mills that they create. And you also have just in general the label. The labeling of this product that makes a ton of claims that so far, we can’t even verify can we?

Scott Hardy:                          Right. We can’t verify them. And one of the, the plaintiff’s main point on this is that whether you’ve got a1 in your milk or a2 in your milk, the milk still has lactose. And the vast majority of people out there who have problems digesting milk, it’s because of the lactose. So even if you strip out this a1 protein, then you still have lactose in the milk. People still may very well get sick or have problems with it. And the stripping out the protein doesn’t actually impact that. And that’s what the plaintiffs are saying is, thanks for stripping out the protein, but you still have lactose, so people may still have major problems.

Farron Cousins:                  Right. And when you watch these commercials, they do give the impression that hey, you can’t tolerate regular milk, try this. This is better. This is easier to digest. You’re not going to have the pain and the problems that come along with regular milk. So, you know the, the lactose, as you pointed out, that’s the lactose part of lactose intolerant. It’s not a1 peptide intolerant. So this is going to be an interesting one. This is a product, as you mentioned, heavily marketed out there.

You see it in supermarkets all the time. A lot of people do choose this. The ones with a more mild, I guess you would call it, aversion to dairy. They can still ingest it, but if they take a little too much in it does cause pain and discomfort in digestive problems. So they did latch on to a market that is out there. The question that we still need answered is have they been honest about that? And hopefully that is what this class action ends up finding out for us, right?

Farron Cousins:                  Absolutely. And if anybody needs any more information on this issue, you can follow the link in the description of this video and head on over to topclassactions.com Scott Hardy, with Top Class Actions. Thank you very much for talking with us today.