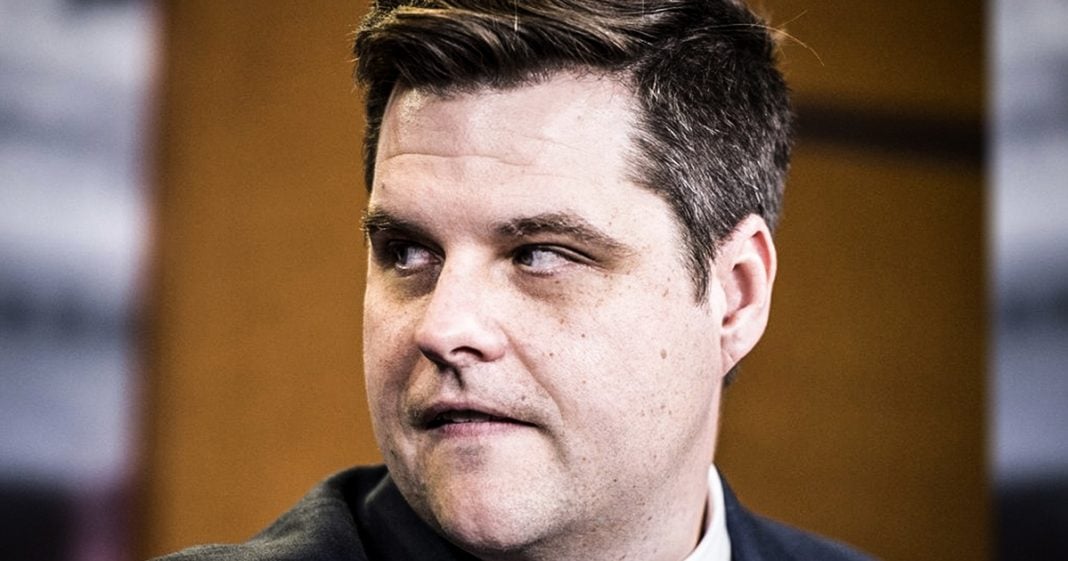 Republican second-term Congressman Matt Gaetz opened up to Buzzfeed in a recent interview where he told them that his only role in DC is to protect and defend Donald Trump. Without that, he isn’t sure exactly what he’d even be doing in Congress. He went on to say that Congress “sucks.” It must be hard for a guy like Gaetz to make friends when he’s such a disgusting brown-noser who is only concerned with being famous, as Ring of Fire’s Farron Cousins explains.

In the latest edition of my congressman is so much worse than your Congressman Matt Gaetz, the Republican Representative of Florida’s first district where I happen to be sitting right now and where I’ve lived most of my life. Um, he recently told buzzfeed news that Congress sucks. This place sucks is what Matt Gaetz had the say about serving as a US representative in Washington DC. Congress sucks. And he admitted in the same interview that the only reason he’s there in DC right now is to protect Donald Trump. That’s his job. He’s not up there representing myself or any of the other people in this district. He is there to protect Donald Trump because, gosh darn it, those Democrats are so darn mean to him all the time. And somebody’s gotta stick up for him. And Gate says, even Republicans sometimes he has to stand up to because they’re not falling in line with Donald Trump.

Here’s a few quotes. Um, when he was asked why he’s in DC specifically, he says, I don’t know. I don’t know if I’d fit in to this place. In the absence of the president. I wouldn’t even fit in in DC if it wasn’t for me being here to defend every single thing that this president does because that’s my goal in life. Um, they come for him every day. They’ll never stop. He has such a disruptive force in this town. You’ve got all the Democrats and even some of the Republicans hoping for him to slip or falter. Defending the president is not an end unto itself in service to my desire to make this town a better place. That’s why I’m doing this. I am defending the president constantly, even among, uh, from his, you know, worst actions. I’m defending him constantly because we’re trying to make DC a better place.

No, listen bud, you want to make DC a better place then. How about your hop on board with all the people doing the investigations into the financial crimes that the president has likely committed and then get him out of office that would make DC a better place. It would make DC a nicer place. But I want to go back to the first statement, not just that he’s not working for his constituents down here because they, most of them don’t care. They will continue to vote for him until he decides not to run. That’s just how this area operates. I hate it. It’s disgusting. They don’t care what he stands for, what he says or what he does. They will continue to vote for him because this is such a grossly deep red area of the state of Florida. But back to the first comment, this place sucks.

Yeah. I imagine it does. When you spend every day of your career being a disgusting Brown noser defending a man who would just as soon stab you in the back. The second you look at him the wrong way. I imagine it’s pretty hard to make friends. I imagine it’s pretty hard to find somebody to go pal around with, maybe sit and have a few drinks after work one day. Although please Matt, don’t get behind the wheel again cause we all know your history with drinking and driving. But nonetheless, yeah, when you’re an asshole, life kind of sucks sometimes. And that’s what you’re dealing with right now. When you’re a horrible human being, people don’t like you and that makes things difficult for you and that’s what you’re dealing with. He goes on in the interview to say, let’s stop with the investigation so we can work on legislation.

You know, we need to be able to legislate instead of just investigate. Matt, there’s literally nothing stopping you from drafting legislation, from bringing legislation to the floor for a vote. There’s nothing in the world’s stopping you from doing that other than your own ambition to become famous and powerful because make no mistake about it. Matt Gaetz Right now says his job is to just go up there and defend the president, but he does have ulterior motives. Why do you think we see this idiot on TV all the time? You know, his first two years in Congress, especially, it’s died off slightly and the last couple months it’s picking up again. This week is guy was on TV all the time. He wanted to get his face out there. He wanted to get his name out there. He wanted to be famous and not for his legislation, not because he was doing good things, but because he was loud mouth outspoken Trump defender, essentially, he was auditioning to be the next Tucker Carlson or Sean Hannity.

And unfortunately, until that day comes, as I previously mentioned, the people in this district are going to continue electing him to be their representative. So here’s what I have to say. If anyone at Fox News, any executives, shit, anybody watching this knows an executive, do me a favor, call Matt Gaetz and offer him a show immediately because yeah, Fox News is awful, but really not as bad as having this moron as your representative in Congress. I think I’d rather deal with him on Fox News than representing me and my family and my friends and everybody else in this district up in Congress.