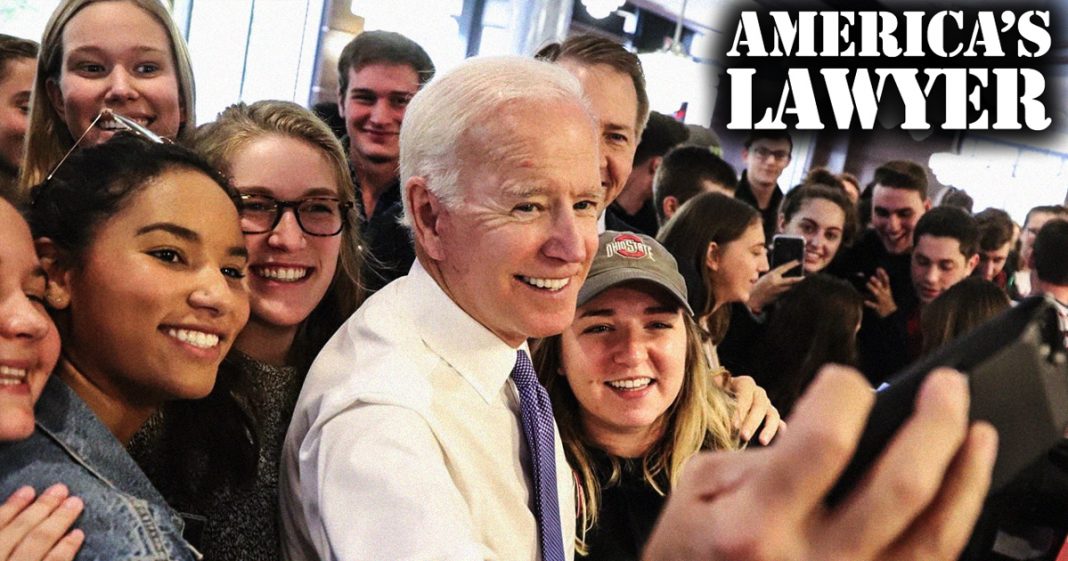 Via America’s Lawyer: Biden was one of the key proponents of the 2005 legislation that’s now bearing down on student loan debt, which prevents the $150 billion worth of private student loan debt from being discharged, rescheduled, or renegotiated. Steve Malzberg joins Farron Cousins to discuss. Farron Cousins fills in for Mike Papantonio on this episode of America’s Lawyer.

Farron Cousins:                  Joe Biden is trying to appeal to younger voters as he’s expected to launch his bid for the presidency really any day now. But as a senator from Delaware, a corporate tax haven where the financial industry is one of the state’s largest employers, Biden was one of the key proponents of the 2005 legislation that’s now bearing down on student loan debt, which prevents the $150 billion worth of private student loan debt from being discharged, rescheduled, or renegotiated as other debt can be in bankruptcy court.

Steve Malzberg joins us from New York now for this story. Steve many young voters, they don’t even realize that Joe Biden played a key role in the financial industries for decade campaign to eliminate bankruptcy protections for student debtors. So how do these students, you know, how do we get this word out basically that Biden helped create the current crisis that this country is facing?

Steve Malzberg:                 Oh, believe me, if he gets into the, the presidential race officially, they will make it known. Elizabeth Warren has already started doing that. And you’re right. For decades, in the early seventies, there were reports of students immediately declaring bankruptcy right after graduation. But then the GAO did a study in ’77 and showed that really it was less than 1% of student loans that were being erased through bankruptcy.

So in ’78, a bill was proposed to block students from gaining bankruptcy protections for a certain amount of time. And that wiped out an 80 year old, you know, 80 year old law as I guess. And Biden was one of the three senators who wrote the bill and a five year exemption on government sponsored loans from bankruptcy protections. Then it expanded in ’84 to include vocational schools.

Again, it was Biden and then the 1990 crime control act, further increasing the waiting time for our traditional bankruptcy protection. And guess who it was the chief sponsor of that bill, Joe Biden. And then ’97, you had a presidential panel recommending a reversal of all this. But congress went the other way and Biden was instrumental in that. So the word will get out, believe me.

Farron Cousins:                  So, okay. About 20 years ago with Biden’s support, Congress passed the law limiting bankruptcy protections for educational loans to students who could prove their loans were an undue hardship. So Steve, a, a court ruling illustrated just how difficult a legal barrier the standard was designed to be even for the most cash strap debtors, right?

Steve Malzberg:                 Yeah. You’re talking about 1998, Biden supported that law. And in the court case that you’re referring to here, there was a disabled woman, 45 years old. Her only income was social security, $10,000 a year. A Clinton appointed judge who, and I say that because by the way, to get confirmed how to go through Biden’s judiciary committee, so he’s involved in that too.

The judge ruled that this woman did not meet the standard of undue hardship for discharging her student loans, even though she showed undue hardship and, and certainty of hopelessness. By the way, another standard. You would think that in her situation, she met both criteria. So that, that court case says it all, how difficult it was, you know, even with that law to get it done.

Farron Cousins:                  So, and honestly, like the story just gets even worse. Cause Biden helped rollback countless antitrust policies. You know, citing a lot of times with Republicans in this process. So, you know, what can you tell us about the, the antitrust part of Joe Biden that we need to know about.

Steve Malzberg:                 Well, you know, you mentioned it at the top. I mean, Delaware, all you gotta do is drive through Delaware, take Amtrak or whatever, and you see all the financial institutions, which is great, but they’re there for a reason, which good for them. I mean, they’re taking advantage of very, you know, lax regulatory conditions that favor financial institutions for being in the state of Delaware. And Joe Biden is, as, as you know, voted for his interest and the interest of those companies in Delaware many, many times.

He’s voted for lots of deregulation. ’05, the bankruptcy, bankruptcy reform bill, defeated ’01. Made a, a means testing much more strict. It made it almost impossible to discharge a student loan in bankruptcy. It also affected loans from government backed nonprofits and from private industry. So I mean, I know Joe Biden’s always been behind this and this is all going to be pointed out I believe if he gets in the race, one of many things that he’s going to have to eventually, I believe, apologize for.

Farron Cousins:                  So last month a Republican, a Republican congressman from New York, John Katco, he filed H.R.770, which is a bill that would actually make student loans dischargeable in bankruptcy like any other consumer debt. This is called the Discharge Student Loans in Bankruptcy Act. This bill is pretty simple, merely strikes the undue hardship clause from section 523(a) of the bankruptcy code. Do you think this is going to gain support from somebody like Joe Biden?

Steve Malzberg:                 Absolutely. Joe Biden, you know, when not to get too political, but when Hillary Clinton ran for president, Bill Clinton apologized for almost every one of his major accomplishments. He apologized for the crime bill. He, he apologized for welfare reform for don’t ask don’t tell because you can’t be a Democrat and support those anymore.

Joe Biden will do an about face on almost every issue that he comes under criticism for and this isn’t going to be the only one. So yeah, he will support it. He’ll apologize for voting against the 30% limit on loan interest against protections from mothers who aren’t getting a, their, their alimony and child support and against victims of identity theft when it came to, to loan forgiveness and bankruptcy.

So, you know, he says he was protecting the interest of his state. You know, MBNA is in his state, they have a financial rooting interest. Didn’t they hire his son? I mean, I guess he’s going to have to apologize for that also. He’s going to have a tough road ahead for, with, with Democratic voters, with the Democratic Party who have moved very far over to the left since Joe Biden.

Farron Cousins:                  You know, I have a feeling there’s going to be a lot of a Democratic candidates apologizing for a lot of things that they’ve done over the years. Steve Malzberg, thank you very much for talking to me.